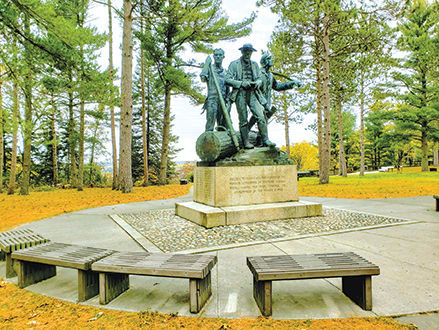 The 14-foot Lumberman’s Monument stands on a high bank with the AuSable River providing a scenic backdrop. The bronze statue of three lumbermen highlights Michigan’s logging history, which was significant for the development of the state’s economy in the 1800s. The statue depicting a “River Rat,” a surveyor and a sawyer was first conceived by R.G. Schreck, former supervisor of the Huron National Forest. Robert Aitken of New York City was contracted to cast the statue, at a cost of $50,000. The completed monument was dedicated on July 16, 1932.

A view of Cooke Pond behind Lumberman’s Monument is picture-worthy any time of the year,  however, the fall colors offer a breath-taking panoramic view. 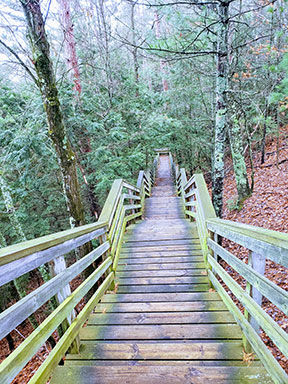 It’s some 300 steps down to the Iargo Springs along the River Road National Scenic Byway in Oscoda Township. The fun part is the walk back up. 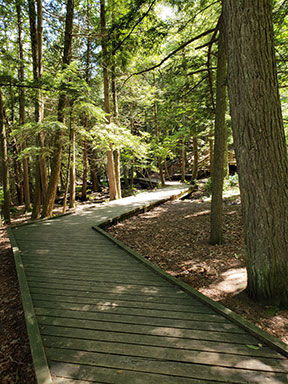 According to the U.S. Forest Service, Iargo Springs has a long history of recreational use, starting before white settlers came to the region. 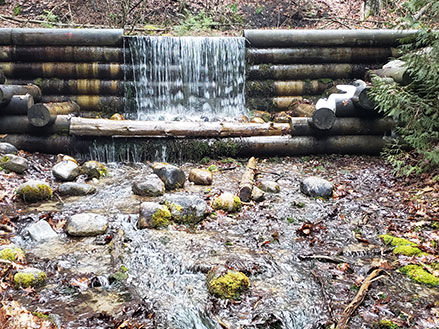 “It’s written that in the 1840s, government surveyors marked a large white pine which stood on a high sand bank along the AuSable River with the name ‘Iargo Springs.’”

OSCODA – If there is one “must see” destination in Iosco County, many will agree it is the River Road National Scenic Byway in Oscoda Township – and more specifically, Lumberman’s Monument and Iargo Springs.

The U.S. Forest Service says the AuSable River was a major transportation route for floating Michigan’s giant white pine from forest to the sawmill towns on Lake Huron. You can learn more about this lumbering history at Lumbermen’s Monument Visitor Center that sits at the center of the byway.

According the Forest Service website, “lying off of River Road National Scenic Byway, Iargo Springs provides a panoramic view of the AuSable River. Used as a drinking water source since pre-settlement times, dams were constructed on the springs by early loggers before the turn of the century. The dams were useful in diverting water to the logging camps nearby. Most of Cooke Pond was dry land then.

“Europeans have visited the springs for recreation since the 1920s. A trail to the springs was constructed by the Civilian Conservation Corps (CCC) in 1934. Early photographs show the dam being repaired and reinforced by the CCC’s. The dams lasted until 1981 when a storm took them out. The site was renovated in 1991.”