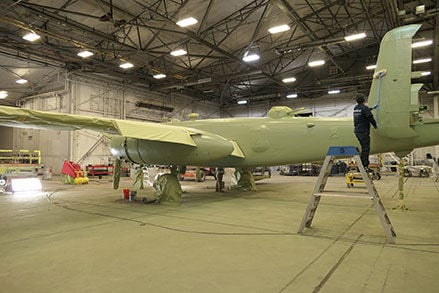 The B-25 Mitchell medium bomber gets its primer coat, and is being dusted in preparation for color paint. The eventual color will be olive drab for the aircraft, which was active in World War II in Italy. The project is being conducted by workers at Kalitta Air. 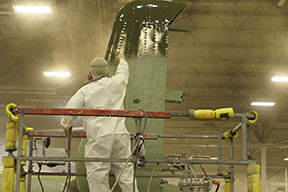 A worker begins to paint the tail section of the aircraft with olive drab paint, matching its original color during World War II. 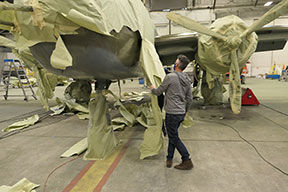 Kevin Walsh, Yankee Air Museum President and CEO, unmasks the B-25 after a paint job by removing sheets of paper from the plane.

OSCODA — On the ninth day since its arrival at Kalitta Maintenance in Oscoda, Michigan, B-25 SN 43-3634 was fully primed and ready for color.  The re-paint project, courtesy of Kalitta Air, is making swift progress.

“It looks like a clay model,” said Kevin Walsh, President and CEO of Yankee Air Museum. “The painstaking preparation over the past week has made an enormous difference. The primer is exceptionally even, very smooth across every surface.”

It was Christmas Eve and while three members of the paint crew dusted the medium bomber, three others prepared paint and loaded their spray equipment. The wings are masked and they are ready to apply color to the fuselage.

Kevin Walsh conferred with Arvis Alaron, paint crew leader, on where the olive drab topside meets neutral grey underside.  They walked the length of the fuselage, pointing and gesturing in agreement, on the blending the colors.

“When the B-25 D models rolled out of the North American Aviation assembly plant in Kansas City, they each had a distinctive wave in the borderline between the olive and grey,” said Walsh.  “I think of it as the signature of the person who painted the plane.”

Walsh said there are differences plane to plane and among the models produced, the “D” models are among the rarest, especially those surviving until today.

The paint crew donned their hazmat suits, then huddled with Alaron who provided instructions for the coordinated movement of painters and spray guns.  They put on breathing apparatus and goggles and got into position, some on scissor lifts to reach the uppermost part of the plane. A hush fell over the hangar as the first spraying began and B-25 43-3634 started its journey back in time.

The paint team worked well into the night, and again on Christmas Day, when they painted the wings, completing the first applications of color.

Kevin Walsh and his son Justin, age 11, arrived at the hangar early on Saturday, Dec. 26 and in unison blurted out,”Wow!” The B-25 was now dressed in olive drab and neutral gray, but still covered in masking paper and tape.

“It’s beautiful, the contrast is absolutely stunning,” exclaimed Walsh.  “The sheen is perfect and the colors are gorgeous.  This is like unwrapping like a Christmas present.”

The B-25 re-paint project has reached another crucial juncture.   A critical inspection was made to assure the plane reflects history with 100 percent authenticity. As the paper and tape were pulled away, Walsh  surveyed the plane, sometimes using his flashlight to see intricate details. This is the day for touch-ups and is the last day to perfect the wings and fuselage. The paint team is scheduled to finish the next day, and Kalitta Air jets have begun arriving from the Christmas rush, needing the hangar.

“This B-25 will travel to air shows throughout the northeast United States,” said Walsh.  “Aviation enthusiasts, by the thousands, will see this plane every year and they look for the finer details.  We have to get it right.  They will call me out if we don’t.”

As a Smithsonian Affiliate and a museum accredited by the United States Air Force and Navy, the Yankee Air Museum works very hard to present history accurately.

“The paint team has produced ‘hard lines’ where the neutral grey meets olive drab at the wing roots and engine nacelles,” said Walsh. He explained that expert painters, like those on this job, naturally produce clean, hard lines without overspray. World War Two aircraft were painted quickly, and blended borders created with overspray were customary.

The team agreed and some sanded the fuselage while others adhered the insignia masks to the plane with precision, even enlisting Justin Walsh to help put the United States Star and Bars to the top of the left wing.

“The paint team applied the second coat of color making the finish more robust while creating the blended effect of hand held, quickly sprayed paint,” said Walsh. “I told them to get messy and they got it!  And they had fun doing it.”