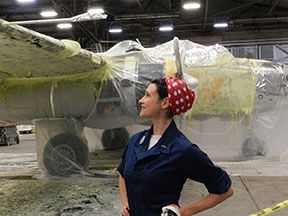 Alison Beatty, a tribute “Rosie the Riveter” for the Yankee Air Force Museum, poses in front of the B-25 project in Oscoda. 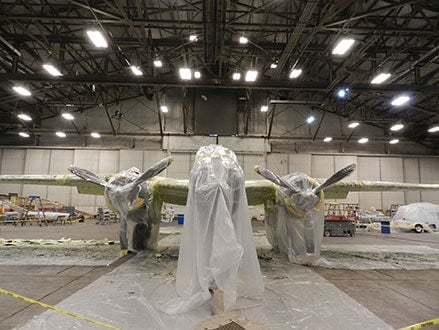 A B-25 bomber, used in World War II, and owned by the Yankee Air Force Museum in Ypsilanti, is housed at a Kalitta Air hangar in Oscoda undergoing a historical paint job to give it its colors when it flew bomber missions in Italy. 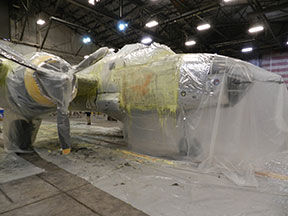 Crews worked to strip the old paint from the B-25 to give it its paint job it would have had during World War II.

OSCODA – On Thursday, Dec. 17, in a Kalitta Maintenance hangar in Oscoda, a hazmat suited paint crew applied paint stripping chemicals to Yankee Air Museum’s B-25 Mitchell bomber Yankee Warrior and it became history.  The plane now enters a new era, exactly 77 years to the day after B-25 Bureau Number 43-3634 was delivered to the United States Army Air Forces in World War Two.

Kalitta Air, a worldwide leader in specialized, on-demand airfreight services, is restoring the exterior finish of the bomber to the same colors it wore in combat in the Mediterranean Theater of Operations in 1944.

In this early phase of the project, the B-25 appears ghostly, draped with heavy plastic that masks the critical components of the plane from the harsh chemicals.  Workers carefully spray the plane and continually inspect the work.

“This is not your average paint job,” said Kevin Walsh, President and CEO of Yankee Air Museum. “The painstaking work being done to prepare the plane for paint is evidence of the paint crew’s commitment to authenticity.  They are treating this plane as if it were their own.”

Walsh said power washing the carefully masked plane would remove the chemical strippers.  Then the crew would inspect virtually every inch of the plane, hand cleaning any residual grime.

“I am thoroughly impressed,” said Alison Beatty, on visiting the project as a Tribute Rosie the Riveter with the Museum. “The women who helped build these planes during World War Two, who we fondly call ‘Original Rosies’ would be very proud of the attention being given to literally every rivet.”

The inauguration featured an epic dance-off across the country

Janet Yellen on Covid relief: 'Smartest thing we can do is act big'

For Kalitta Maintenance Structures Manager, Greg Ruby, hand cleaning the rivets is only the beginning. “We didn’t know until we did the research, that the factory paint was applied by hand,” he said. “So, that’s how we are going to do it.  There is no substitute for perfection and this is our way of honoring the men who flew this plane and the women who built it.”

Meanwhile, Kevin Walsh is drilling deep into the plane’s background to gather new information while also pouring over research by the Museum’s B-25 historian Jerry Lester, who is also a member of the 57th Bomb Wing Association.   B-25 number 43-3634 flew its combat missions from Corsica into Italy as part of the 12th U. S. Army Air Forces, 57th Bomb Wing, 340th Bomb Group, 489th Bomb Squadron.

Walsh will be providing the detailed re-paint documentation to the paint crew soon.  These diagrams and instructions come from original blueprints and historic World War Two photographs of B-25s in Corsica.

“Kalitta Air and Kalitta Maintenance have made this holiday season very special, indeed very happy, for all of us at Yankee Air Museum.  We couldn’t think of a better Christmas gift this year,” said Walsh.

“Christmas shopping for Yankee Air Museum’s B-25 crew will be easier next year,” chuckled Walsh, concluding, “They all need new bomber jackets!”