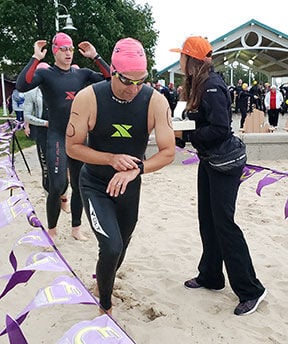 Patrick Damer, 51, of Oxford sets his watch at the start of the 500-meter swim at 8 a.m. Saturday on a choppy Tawas Bay. 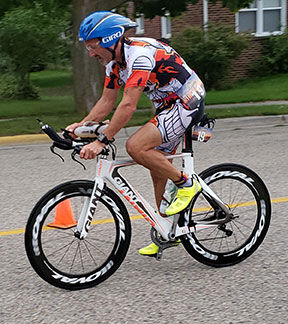 Olympic distance triathlon athlete Francis Szostak, 55, of Saginaw, traverses Main Street in East Tawas at the beginning of his 40-kilometer bike ride to the Huron National Forest and back. 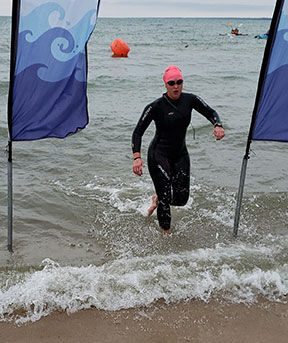 Samantha Bishop, 30, of Farmington was first out of the water during the first leg of the Olympic distance triathlon held in East Tawas Sept. 12.

Kate Winslow, 19, of Orlando, Fla. is all smiles as she takes to the sidewalks of downtown East Tawas near the finish of the Sprint distance triathlon. 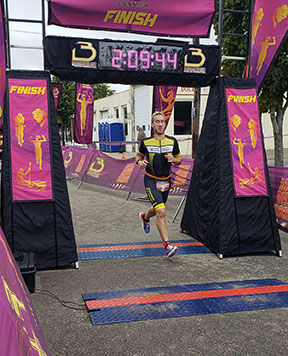 Timothy Schmitt, 37, of Madison Heights crosses the finish of the Olympic distance triathlon. He finished seventh overall and first in his male 35-39 age group. 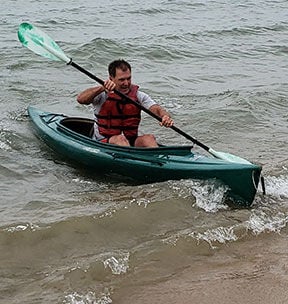 A kayaker nears the Tawas Bay shoreline in the Kaya-Tri distance triathlon during the Sunrise Side Triathlons.

Gary Greib, 55 of Lake Orion, was the top male finisher finishing the course – a 500-meter swim, biked for 40 kilometers starting in East Tawas, up Bridge Street to Monument Road to the Huron National Forest and back and finished with a 10-kilometer run through the residential streets of East Tawas – in 1:54:40. The swim was originally set for 1,500-meters, however, choppy waves on Tawas Bay shortened the swim to 500 meters. The water temperature of Tawas Bay was 64 degrees at 8 a.m. on Saturday, Sept. 12 – a tad warmer than the 60 degree air temperature.

While most of the athletes were from Michigan, the furthest athlete came from Orlando, Fla.

Finishing second overall for the men in the Olympic distance was Stephen Baluch, 37, of Farmington Hills in 1:54:44, while Christopher Hass, 40, of Vicksburg was third in 1:58:06.

A total of 159 athletes – 59 in the Olympic distance and 100 in the Sprint distance – were registered for this year’s Sunrise Side Triathlons, the 13th annual event held in East Tawas by the sponsoring Burton-based 3 Disciplines. The triathlon was just one of a handful of events held in Iosco County this year during the pandemic.

Kenny Krell, race coordinator and owner of the sponsoring 3 Disciplines Racing, said participation in this year’s triathlon was limited due to the governor’s executive order on outdoor events. He said 3 Disciplines cancelled 30 events this year due to the pandemic.

“To be quite transparent, we can’t make any money with 100 athletes,” he said. “We doing this for the athletes, to give them some sort of normalcy.”

Civil rights was at the top of Eleanor Roosevelt's agenda

Tapper: The early virus warning that was silenced

For the women in the same event, Kelly Valente of Dearborn was first in 1:19: 24. She finished fourth overall. Finishing second was Britt Vallas, 37, of Bay City in 1:19:44. She finished sixth overall and was last year’s female winner in the distance. Kelci Ramey, 29, of Waterford was third in 1:22:42.