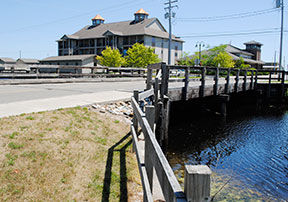 The Tawas City Council has awarded a $199,520 bid to John Henry Excavating, to rehabilitate the Mathews Street bridge. Repairs to this structure, shown here, and the First Street bridge have been identified by officials as two priority projects. 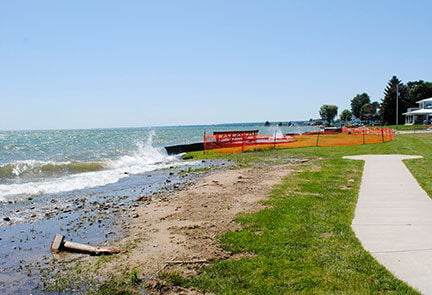 Tawas City has advertised for design and construction proposals associated with shoreline protection for this stretch of property on Lake Huron. This section remains blocked off, as shown at right in the photo, since it has been hit particularly hard by storms, heavy rainfall and the record-high water levels.

City Manager Annge Horning stated that the bids for this project were due on June 24, and there were two respondents – John Henry Excavating, Inc., East Tawas, in the amount of $199,520; and MacArthur Construction Company, Hillman, in the amount of $230,593.

Officials also viewed a bid summary from Brad Link, of Link Engineering Services in Traverse City, along with his estimated project costs amounting to $177,259.  “We have reviewed these bids and recommend awarding the project to John Henry Excavating, Inc.,” he stated.

Link also pointed out that – due to the delayed start of construction this spring, as well as the Governor’s current restrictions pertaining to the COVID-19 pandemic – construction costs for this season have increased.

“The Engineer’s estimate does not reflect the current causes for the increased costs,” he explained. “It is also recommended that the proposed work remain a priority.”

Horning reminded the council that the total budget this fiscal year for both the Mathews Street and First Street bridge projects is $255,000.

“When we bid the First Street bridge project in the spring, we will have a better idea of our financial position with our Act 51 payments and the Council can determine if they would like to move forward with that project,” she stated.

As for the Mathews Street structure, officials voted 6-0 to award the bid to John Henry Excavating, with Councilwoman Jill VanDriessche not in attendance.

As previously reported, for the past several years the council has been setting aside $65,000 annually for such work. It was last August when they approved an expanded set of improvements to the Mathews Street and First Street bridges. The estimates at that time were $150,830 per structure.

These bridges are among the four timber structures in the city which span Tawas River – along with the Whittemore Street and Sixth Avenue bridges – and all are in need of repairs. Given both the condition and the heavier traffic flows on the Matthews Street and First Street structures, officials opted to concentrate on these two first.

In separate business at their July 13 meeting, the council discussed another potential project.

The city has sought proposals for the design and construction of 385 lineal feet of shoreline protection along 513-545 W. Lake St. (US-23). This involves the area in Tawas City Shoreline Park, from Town Square to the former bar property.

GOP convention in Charlotte will be closed to the press

Supercharge Your Immune System With Immune Maximizer+ From NutraCollagen®

“We only received one proposal and it was from Schaaf & Associates Construction, Inc. The quoted price is an allowance and may be either increased or decreased, with the City’s approval, based on the quantity of materials,” Horning stated.

She advised that the proposal includes removing the current wooden deck, while leaving the existing concrete, and constructing an armour stone shore protection system. The work can be scheduled after the second week of September, and will require 2½ to three weeks for completion.

“I am purposely not sharing the price right now because it is higher than the $85,000 we had budgeted for this project, which is based on a verbal estimate from another contractor,” Horning stated. “If the Council would like us to re-advertise and try to solicit additional proposals and allow the work to be completed later in the fiscal year, we can do so.”

She added that, if the council chooses to proceed with the proposal, she recommends receiving input from the planning commission – which also serves as the park board – since the proposal involves the removal but not the replacement of the wooden deck.

“The deck is used frequently during the warmer months and I think it would be prudent to receive input from them before making this decision,” Horning elaborated.

As noted in the draft minutes from the meeting, discussion was had on such elements as installing sheet pile; the high demand for contractors; the removal of the deck and the capability of the Department of Public Works to rebuild same; re-bidding; and moving forward with the bid received.

No action was taken, and council members requested that this item be placed on the agenda of their next meeting, with the bid amount.

In other matters, officials also entertained their options for the city’s waste collection contract.

According to Horning, the joint, five-year contract with East Tawas for waste collection expires in March 2021.

“Our current contract was originally negotiated with Waste Management in 2006 and we have negotiated addendums twice in subsequent years,” she continued.

Horning said she would like to begin discussions with Waste Management, but that she also wants direction from the council on whether they want to issue a request for proposals (RFP), as they haven’t done so in almost 15 years.

“Our other options for waste collection are Sunrise Disposal Service, which is operated in Oscoda, and Republic Services, whose closest site is in Pinconning,” she advised. “Neither of these options have a local site that would provide a recycling center or additional drop-off area for our residents.”

The council was in favor of issuing an RFP. They requested that Horning work with East Tawas officials to see if they are interested in pursuing a joint contract again, and if they are on board with issuing an RFP, as well.