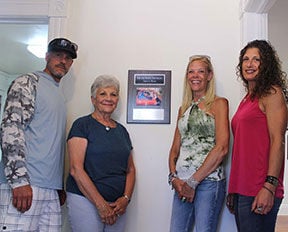 Members of the Oesterling family pose in front of the ‘Bob and Sandy Oesterling Service Room’ plaque. Pictured left to right, Earl, Sandy, Shelly Bird and Charlene on June 25. 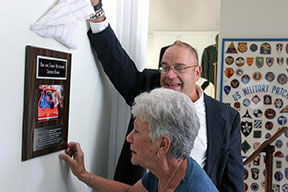 Iosco County Historical Society President James Miner unveils the plaque to Sandy Oesterling at her dedication ceremony held on Thursday, June 25. Oesterling acknowledged the plaque with tears running down her face and hugs all around. 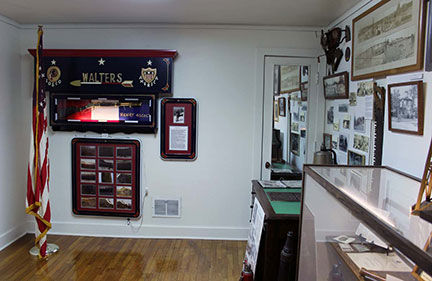 Board members of the Iosco County Historical Society dedicate the service room to Bob and Sandy Oesterling.

EAST TAWAS – Thousands of hours of community service dedicated to cleaning, rehabbing, labeling, refinishing, moving and re-purposing and rummaging historic artifacts – has led to the dedication of the service room to Sandy and Bob Oesterling on Thursday, June 25.

Sandy served the ICHS as the Board President from 2014-2020; however prior to that she served on the board in other positions and was heavily involved in work in the museum. Her late husband, Bob worked right alongside her. Bob passed on March 21, 2020.

“None of us could have ever expected to lose one our honorees, the husband of over 50 years to Sandy and dad to three children, Shelly, Earl and Charlene, a confidant to many and a friend to all, Bob Oesterling,” said Miner. “My biggest regret is that this wonderful moment could not be experienced with Mr. Oesterling standing right with us all. In spirit, Bob is here. He is as humble as we all remember him,” said Miner during his speech given at the dedication.

The ceremony to unveil the dedication plaque took place at the ICHS and was presented by James Miner and Treasurer Robin Gray. Miner welcomed friends, family, guests and the guest of honor. He introduced himself stating he was the president and immediately seceded Sandy.

“This gathering is a significant personal honor for me and a huge source of pride to stand before all of you to dedicate the service room to two individuals who are so deserving of recognition. This project literally took a village to complete as planning was started last year at least,” said Miner.

Miner went on to say how in his generation he has noticed that community service is few and far between.

“Community service ebbs and flows like the oceans tides. A natural disaster or global pandemic bring the very best out of all of us; however, the day to day community service aspect that is for a lot of us short-sighted, is what gets lost in the big picture,” said Miner.

Trump adviser: Additional $600 is a disincentive to go back to work

Miner said that as individuals look around the  museum they can see all the thousands of hours of work that Bob and Sandy dedicated to make it special.

“Its the museum that Sandy and Bob Oesterling built. Sandy, we all know that you and Bob would think its trite and ridiculous to quantify the time you’ve given to this museum as those thousands and thousands of hours simply could not add up to the love, dedication and your hard work you have given to this,” said Miner. “It shows through every doorway and around every corner our community has received a precious gift through your generosity and selflessness.”

Following the brief speech, Miner unveiled the plaque to Sandy, her children and others in attendance. At the sight of the plaque, Sandy held her hand to her mouth while tears of joy streamed down her face. Her utter awe in the piece was evident. Gray read the engraving of the plaque aloud.

“On this day, June 25, 2020, this exhibit room is being dedicated as the Bob and Sandy Oesterling Service Room. Sandy and Bob Oesterling have exemplified community service and pride by giving of themselves for the betterment of this museum. Without their vision and tenacity, the society and its museum would be unrecognizable. This community is grateful and indebted to their selflessness and hard work from now and into perpetuity,” read Gray.

In an effort to keep those in attendance thinking Miner left them with this thought.

“As we dedicate the Bob and Sandy Oesterling service room it begs the question, ‘how do we as a community meet the challenge of your legacy of community service?’ I think instinctively we know what the answer is, always do our very best and keep it going,” said Miner.