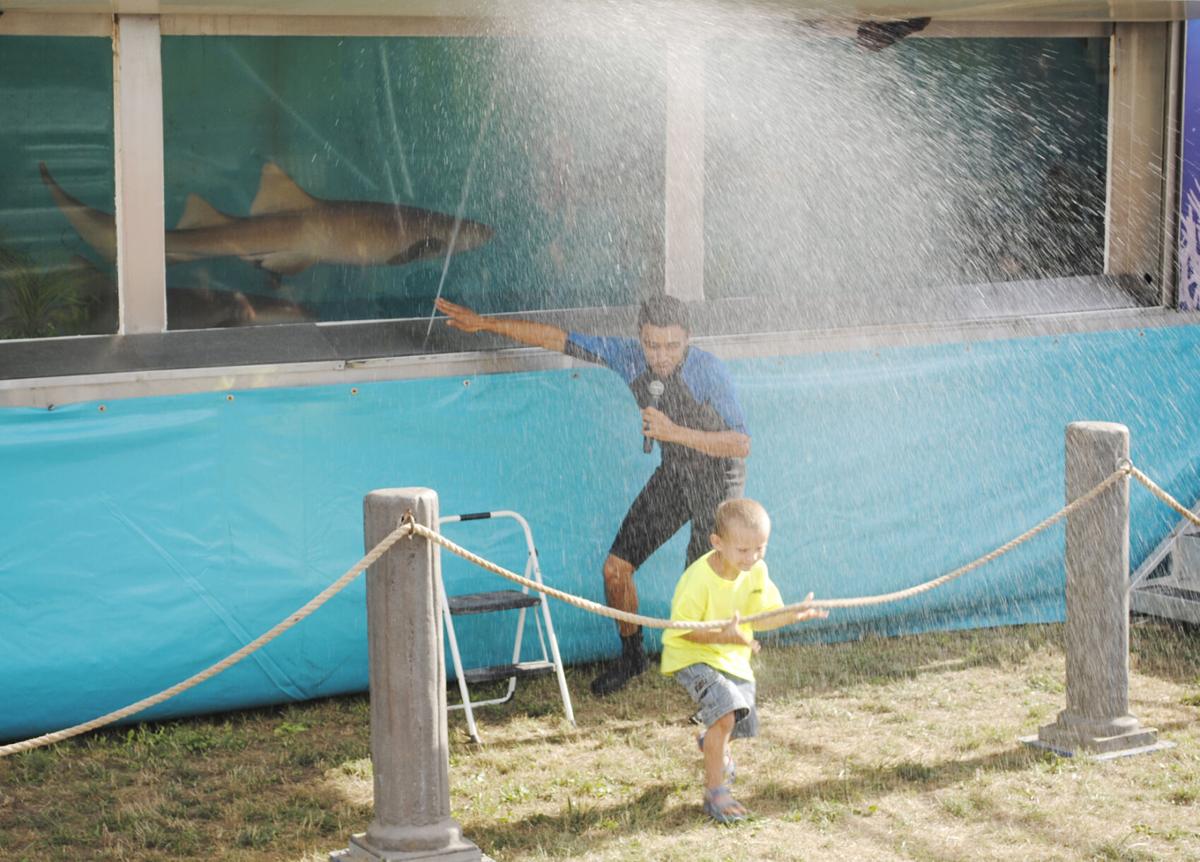 TANK PRANK – First-time fair goer Conner Hampton, 5, Mio, was treated to one memorable – and hilarious – experience in Hale last Wednesday, during the Live Shark Encounter show. One of the presenters explained that those in the audience always ask if the glass is going to break. So, he sought out a volunteer to test the strength of the tank before kicking off the show. Hampton quickly threw up his hand, not knowing that a gag was in store. When the youngster tapped on the glass, water came spewing out and he made a beeline in the opposite direction. But it was all in fun, and Hampton was even given a real shark tooth as a souvenir for being such a good sport. 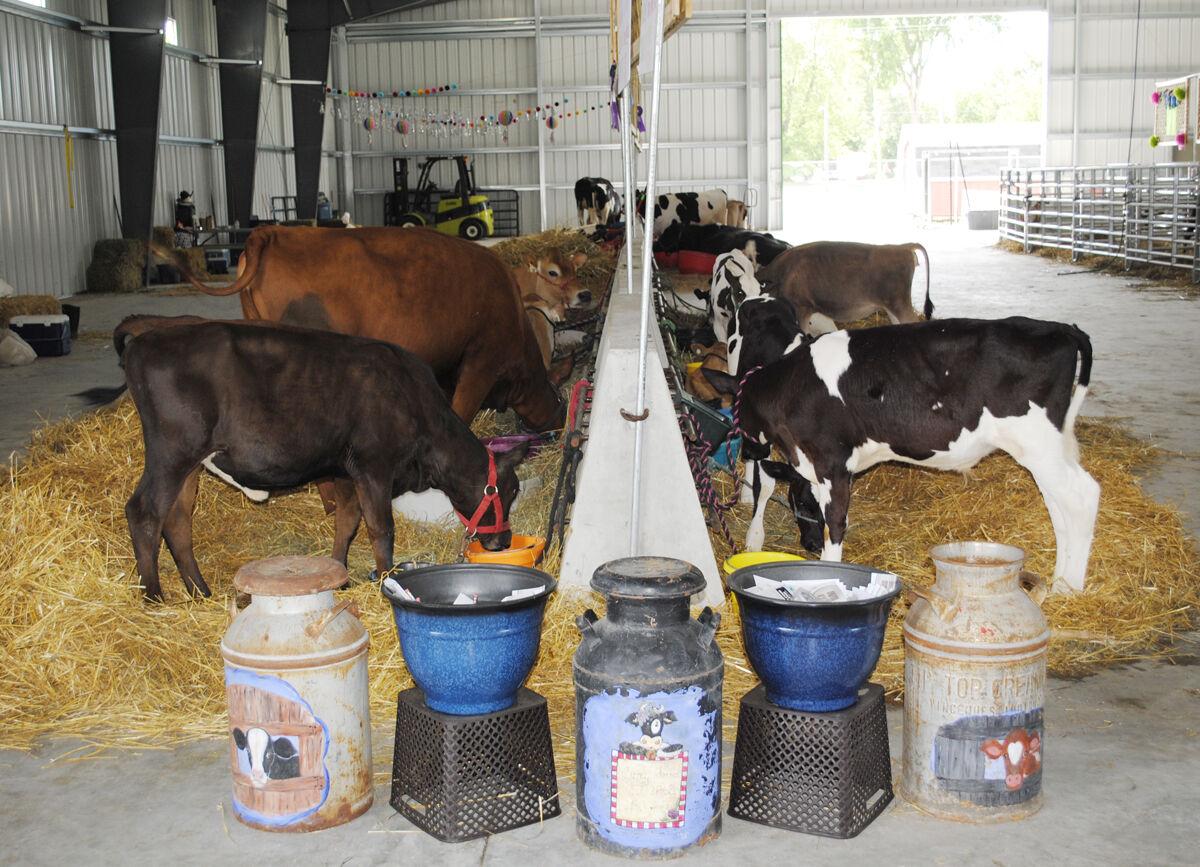 DAIRY DISPLAY – Along with a variety of agricultural education activities, the livestock arena of the fairgrounds boasted an array of animals – including the cows shown here – as well as sheep, goats, an alpaca and a miniature donkey. Other areas of the venue housed the hog, rabbit and poultry entries from the 2020 participants. 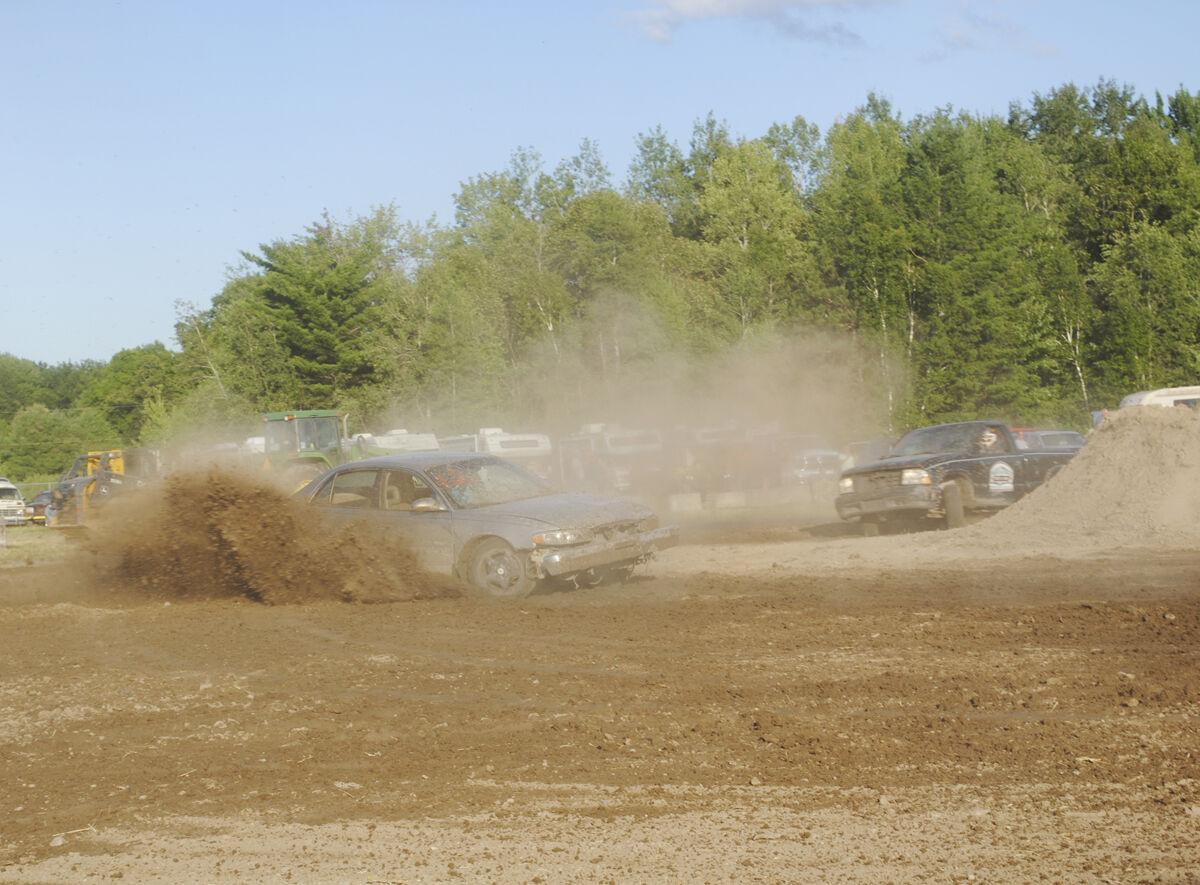 AT THE GRANDSTAND – The exhibition grandstand was host to such events as the Motorhome Demo Derby & Night of Destruction, which also featured other racing challenges, as demonstrated here. 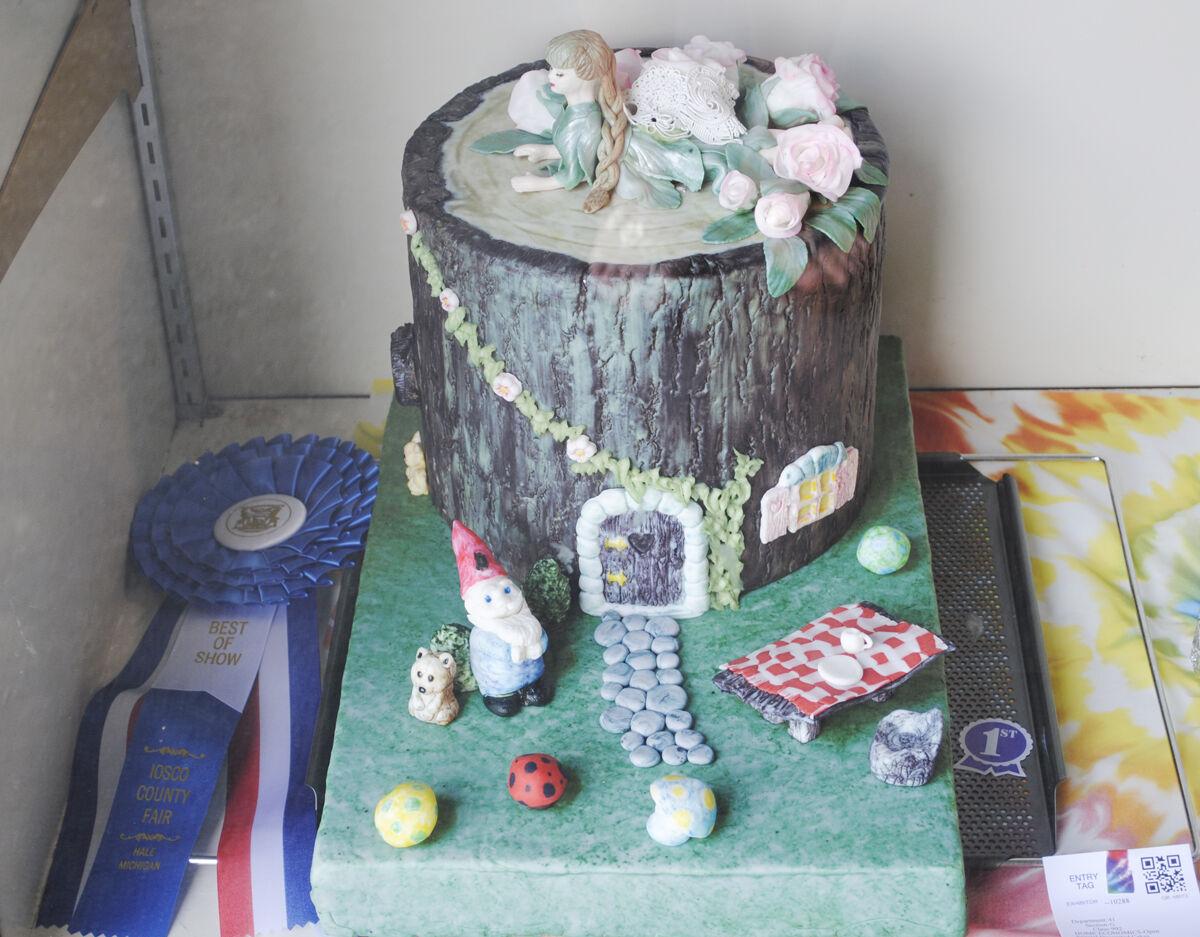 NO-BRAINER – Featuring intricate details, complete with a charming picnic scene, it’s easy to see why this cake earned a Best of Show ribbon at the 2020 fair. The creative confection was submitted by Deborah B. Houle, Whittemore. 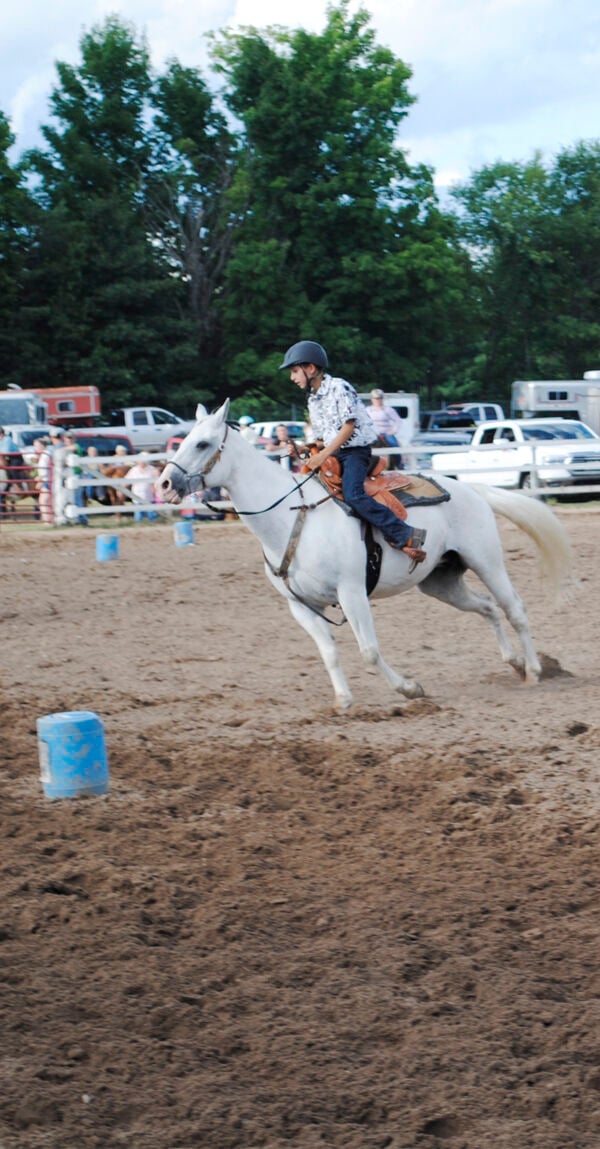 BARREL BENDING – Colton Gilbert shows off his skills at the Iosco County Fairgrounds in Hale, during the July 29 Open Speed Horse Show.

OUT OF THIS WORLD – When decorating her area at the county fair this year, Sophya Sawielski, 11, Sand Lake, fittingly opted for a space-themed display – given that her pig is named “Jupiter.” When Sawielski started out with the Hampshire cross, Jupiter weighed 60 pounds. He now tips the scales at an estimated 300 pounds. Sawielski has displayed horses in the past, as well, and both she and her family have a long history with the fair. 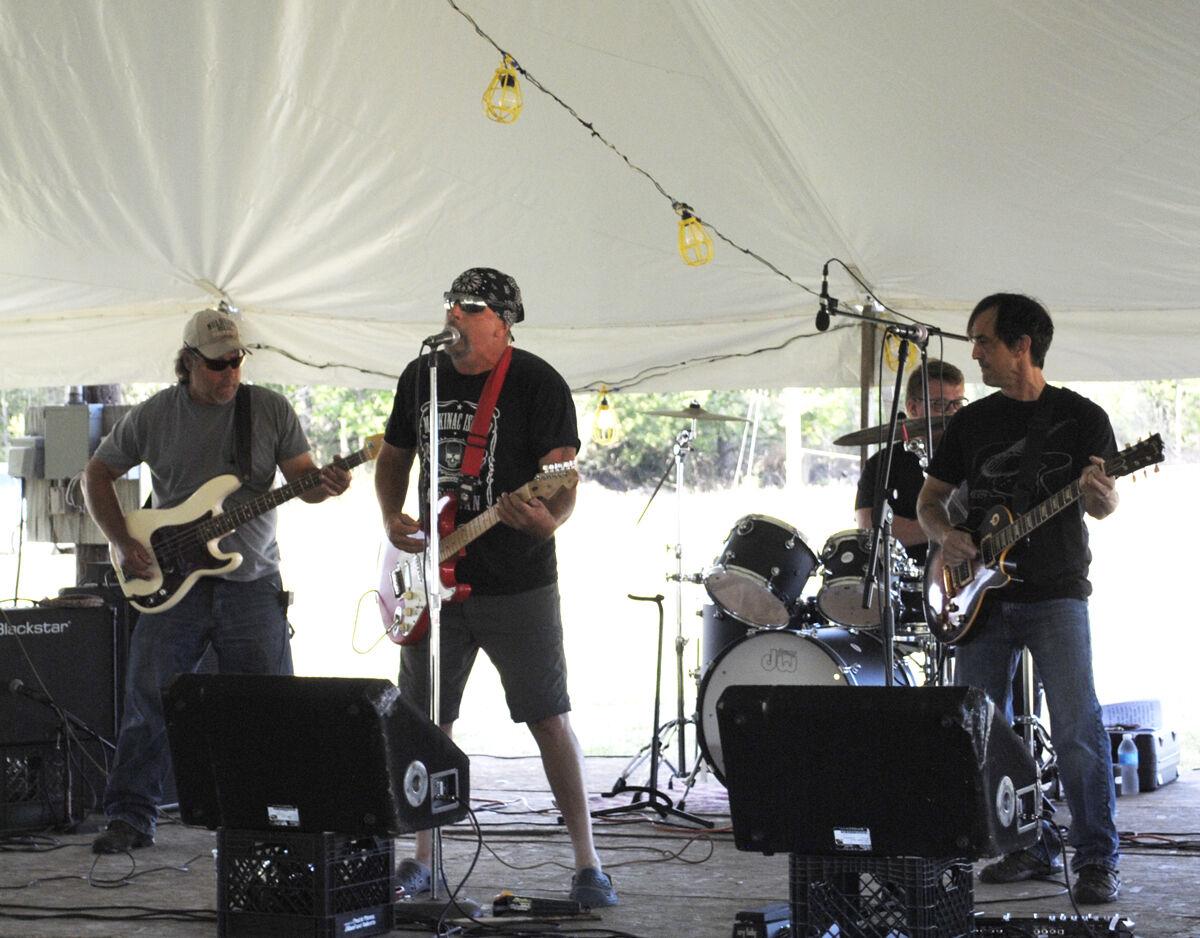 TAKING THE STAGE – Several different bands kept the crowd on their feet during the 76th annual Iosco County Fair, which ran from July 27 through Aug. 1. A particularly pulse-pounding performance was given by Masquerade, pictured above, partway into the week. They showcased a set of hits from multiple genres, appealing to those of all musical tastes. 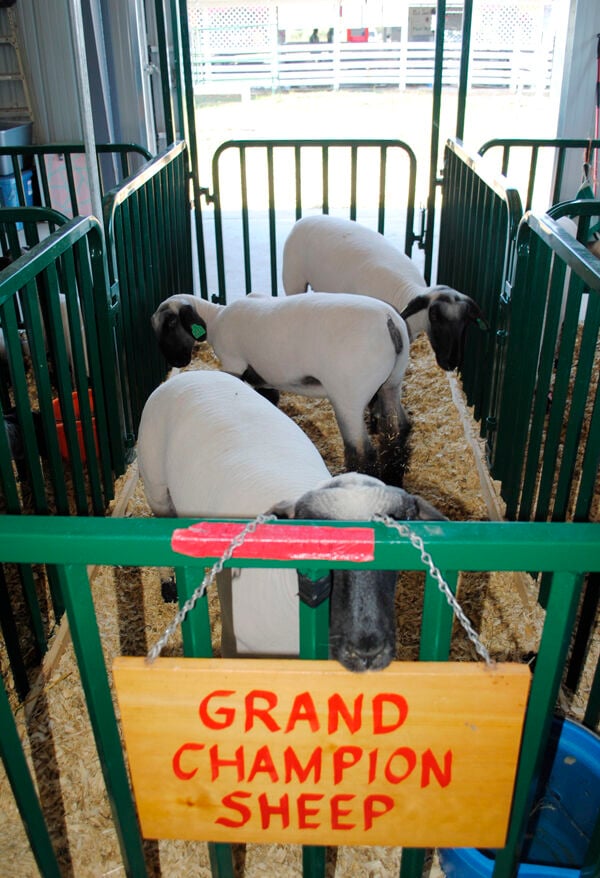 CHAMP SNACK – This trio of Grand Champion sheep, “Munchie,” “Midgie” and “Betty,” were shown at the fair by Bransen Bellville. One of the animals is spotted here on Friday, mistaking its prized sign for an afternoon snack. 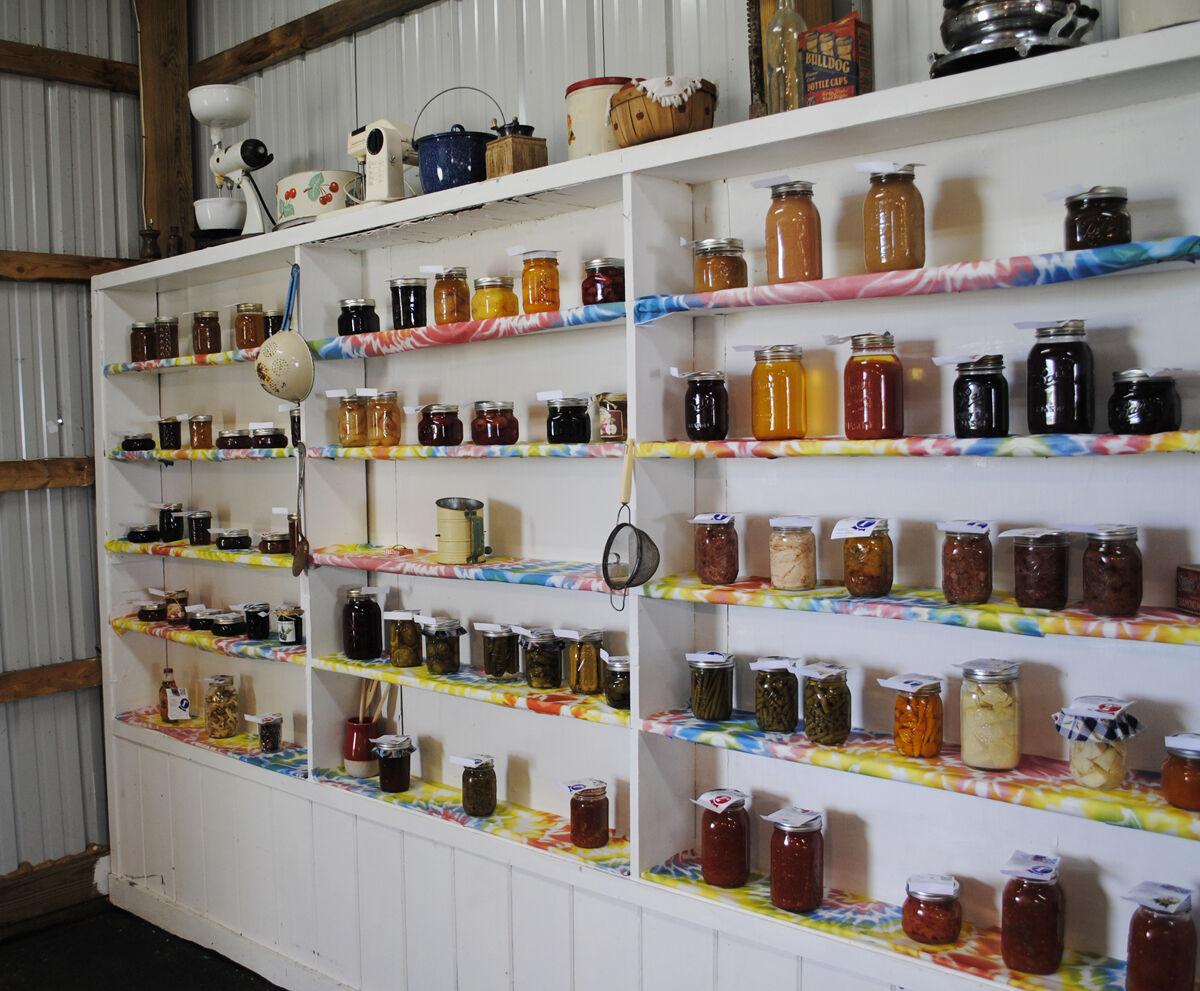 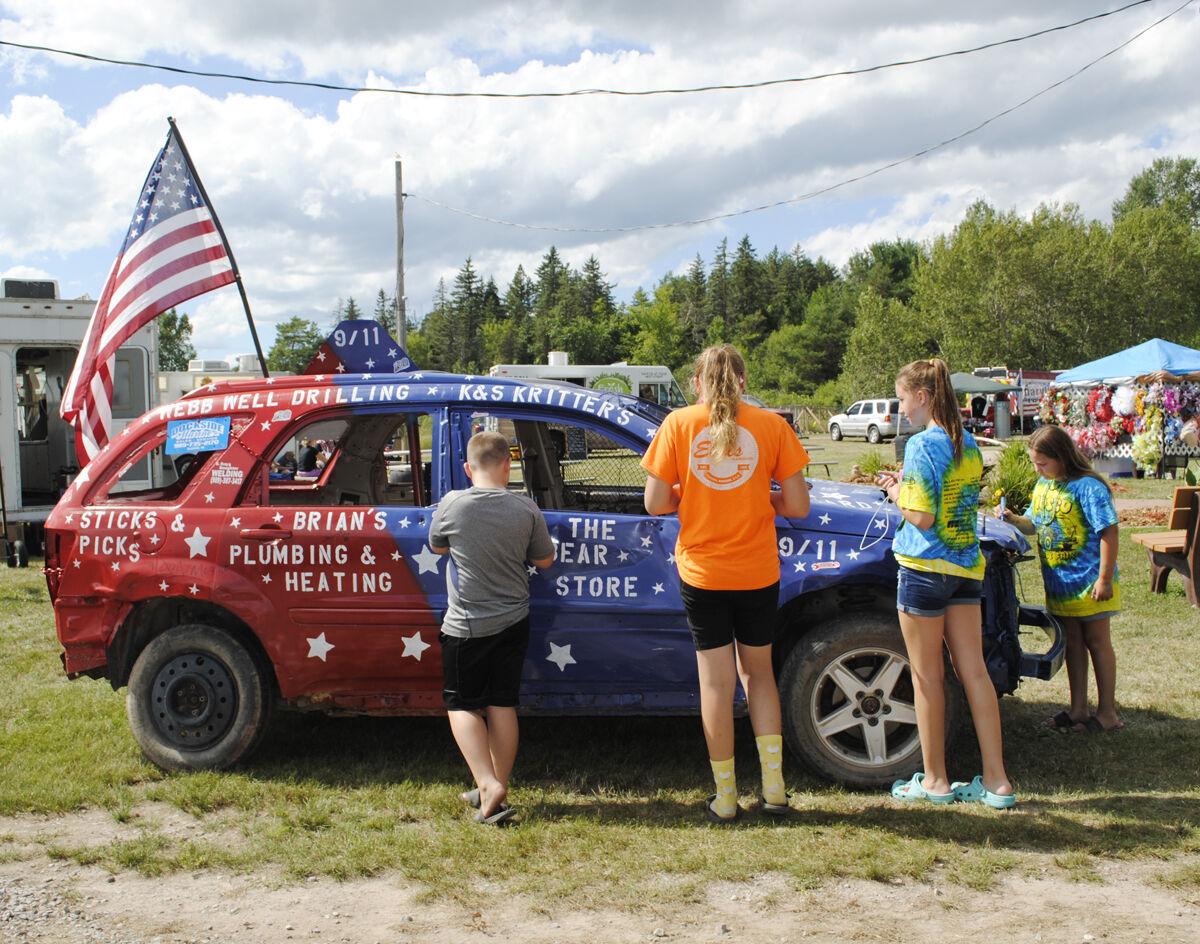 FUNDRAISER – Utilizing a unique way to raise some cash, Hale resident Scott Harburn, Sr. organized a fundraiser to assist the Plainfield Township Fire Department with their next Fourth of July fireworks show. For a donation of any amount, the youngsters who attended the fair could sign their name on Harburn’s vehicle, as seen here. He intended to participate in the Off-Road Demo Derby Bump N Run last Friday, which would have allowed the signers to see their names on his car while it was in action. The restrictions brought about by COVID-19, however, resulted in this event being cancelled. But Harburn’s efforts still raised funds for the fire department, and there were also a number of other activities presented at the fairgrounds that weren’t hampered by the pandemic. 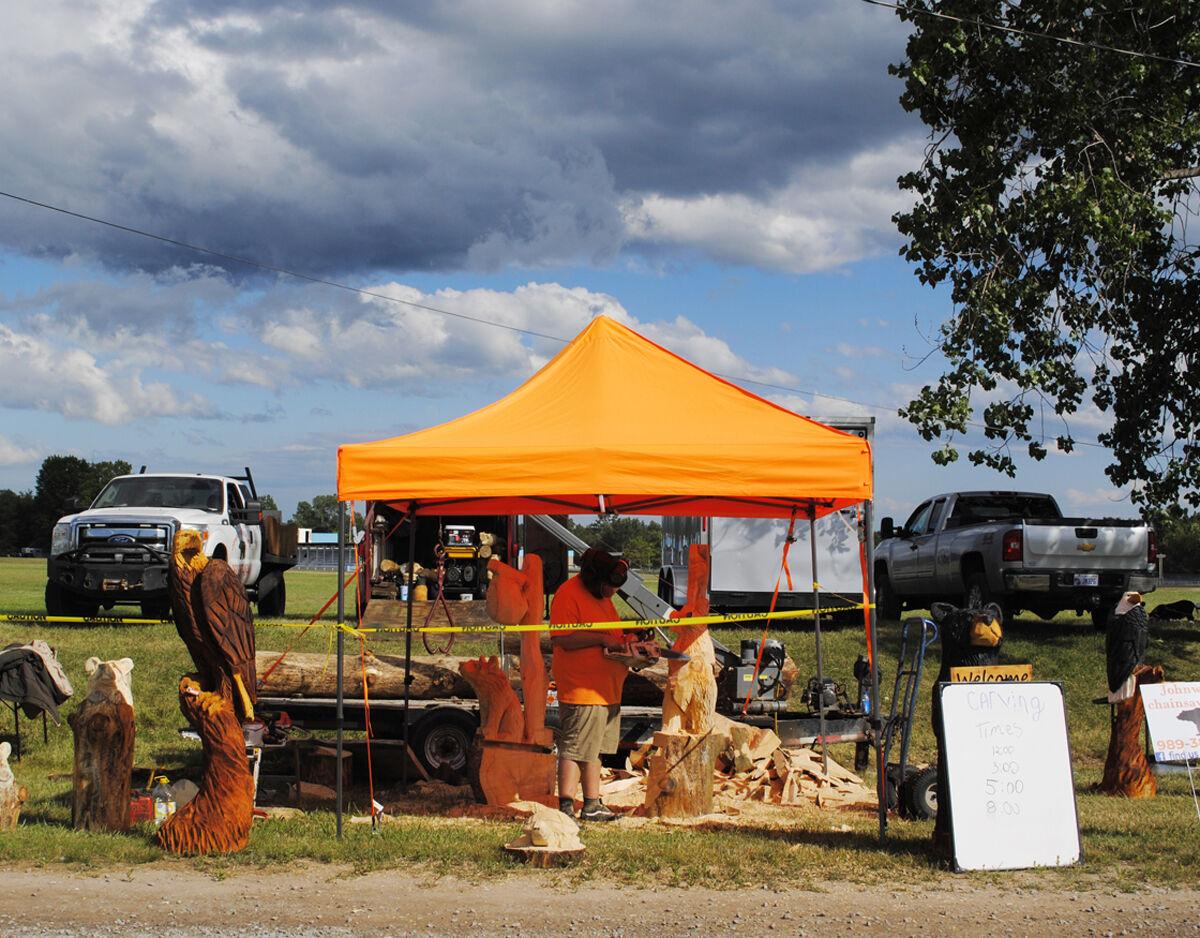 BEFORE AND AFTER – The “Johnwesley chainsaw carver” exhibit was highlighted periodically during the fair this past week. While an active carving demonstration is shown here, some of the finished products can also be seen at left. 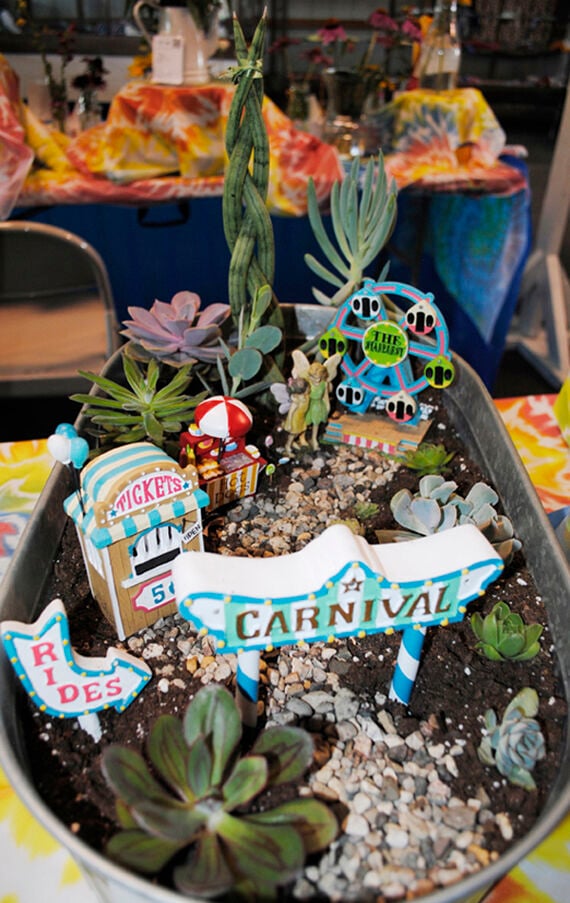 GET YOUR TICKETS – Brenda M. Hughes, Tawas City, earned second place in the Floriculture-Open/Special Arrangements class, for this carnival-themed entry. 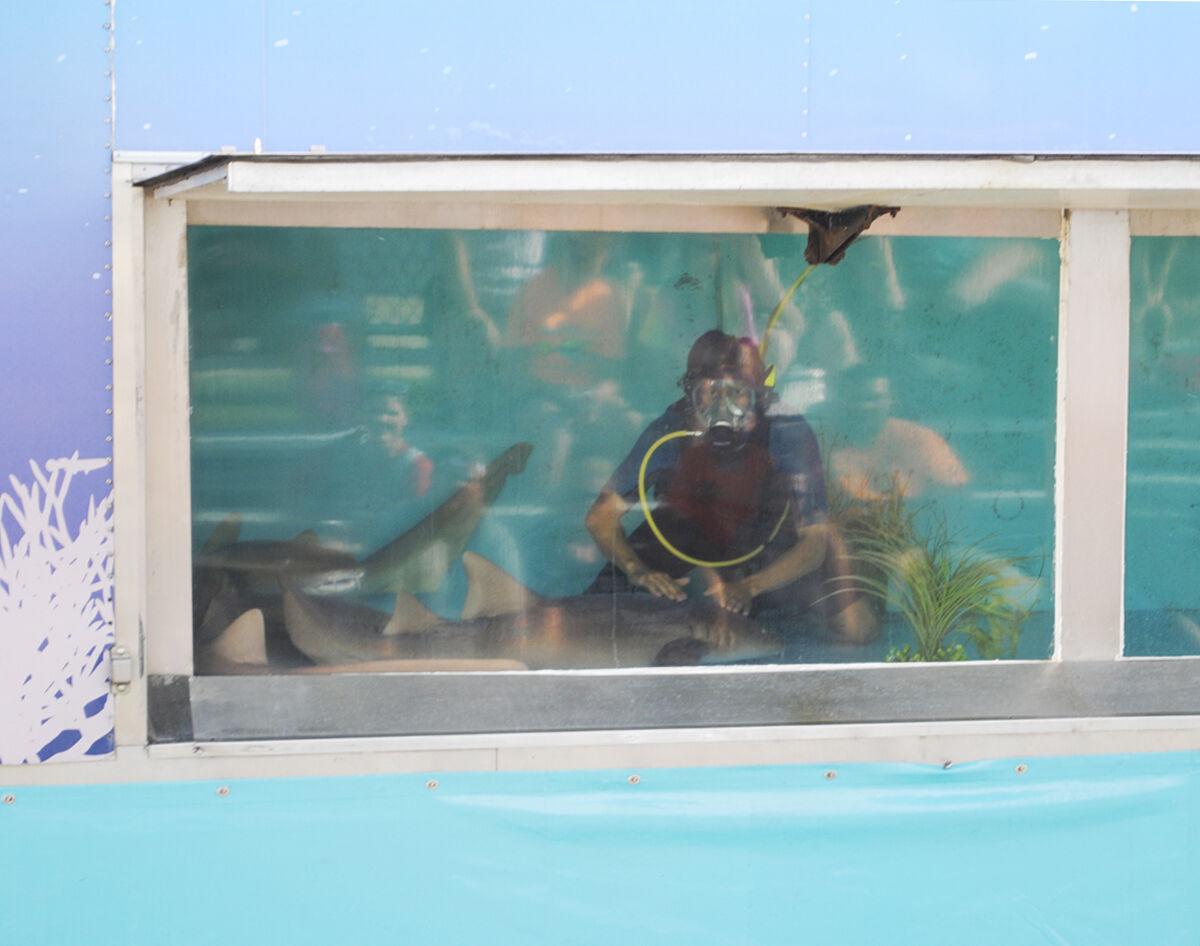 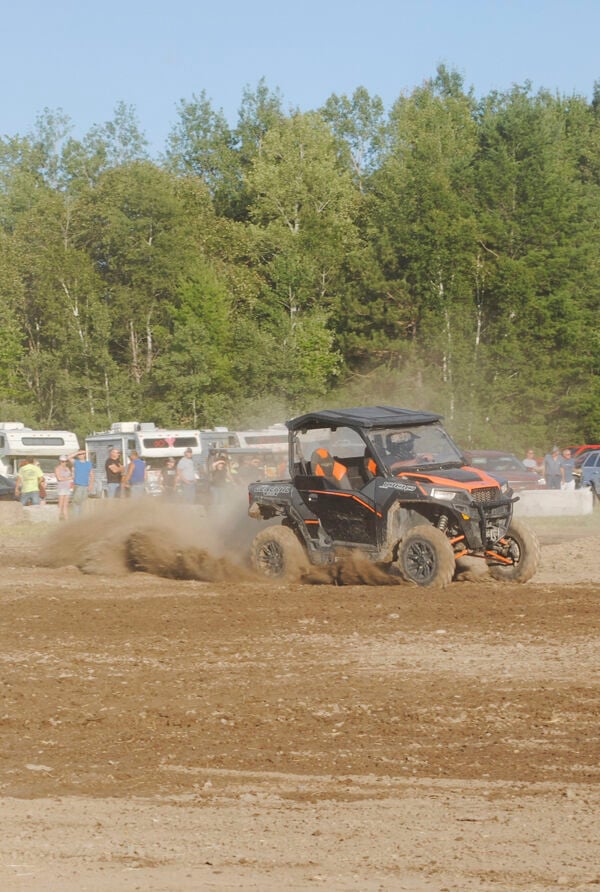 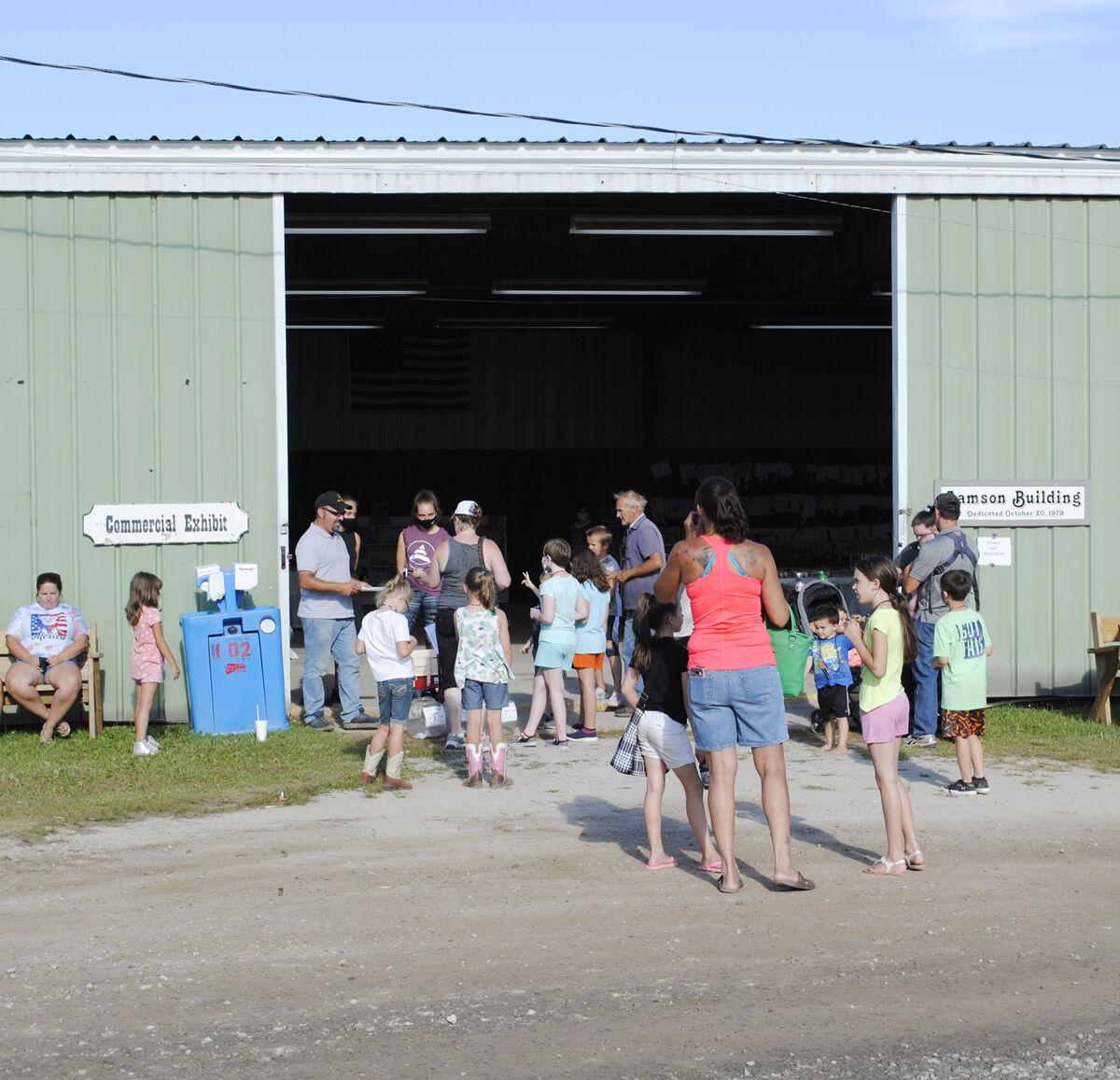 AND THE WINNER IS... – On all six days of the occasion, drawings were held for both his and hers children’s bicycles. Here, a crowd is seen forming outside of the Samson Building on the fairgrounds, awaiting the announcement of the winners on Friday. 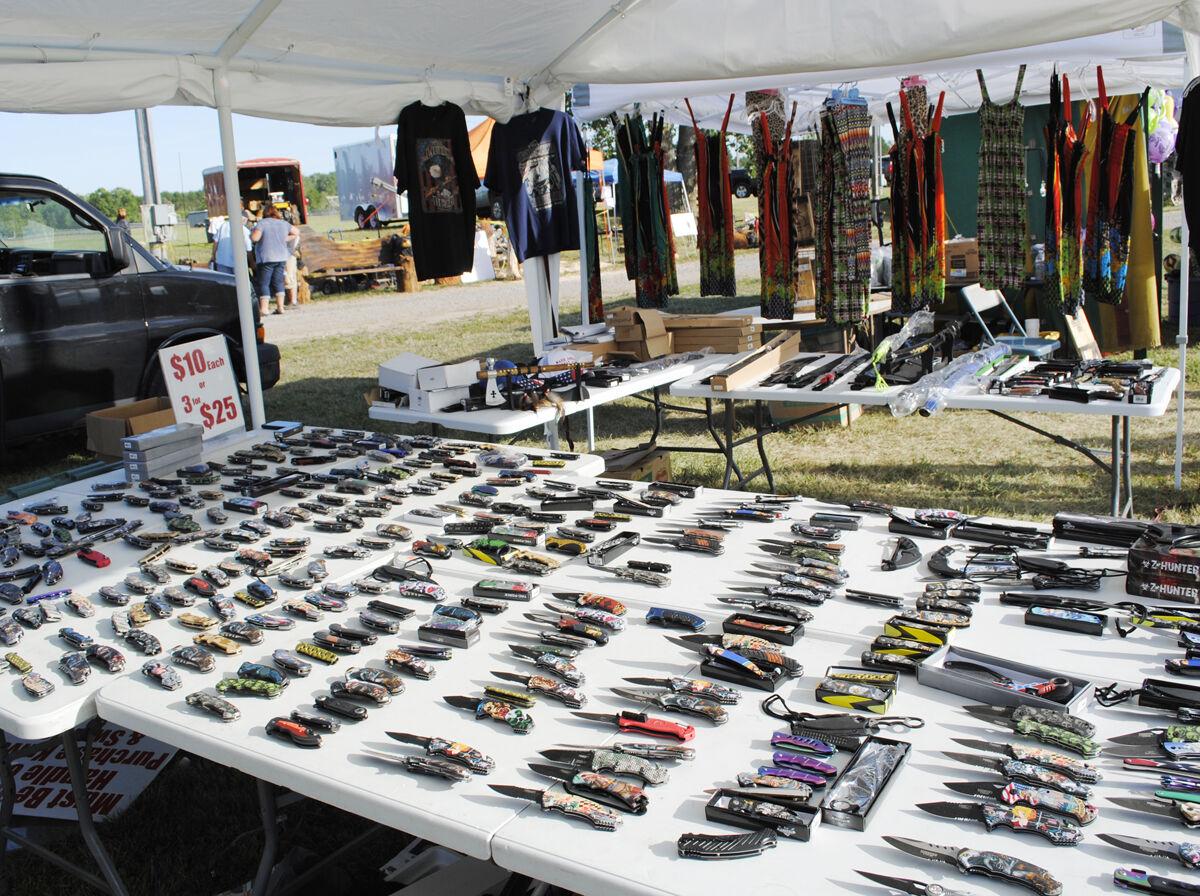 READY FOR ROUND TWO – Dennis Litzenburg, of Denny Bob’s, LLC in Allegan, was among the vendors at this year’s county fair, and he brought with him a large selection of knives, T-shirts and other items. While COVID-19 led to the cancellation of several activities for 2020, Litzenburg shared that – unlike other fairs and carnivals he has participated in – he didn’t have a single bad experience during the event in Hale. Following his first-ever appearance at the Iosco County Fair, he said he is already looking forward to taking part in the 2021 festivities. 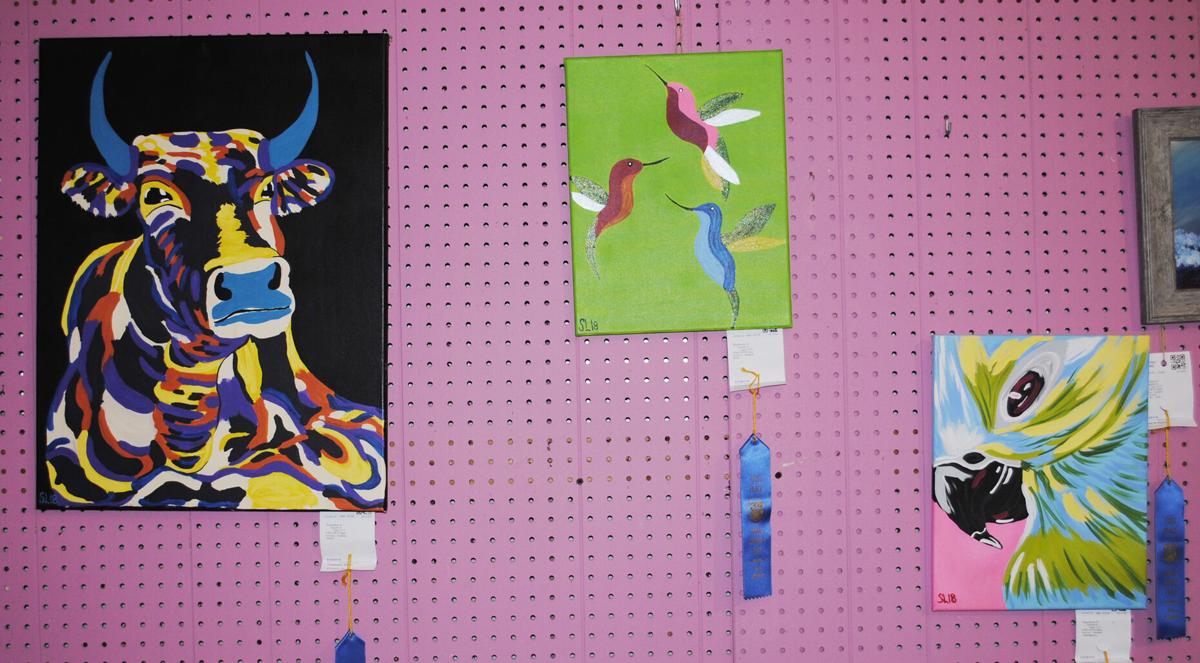 HALE – Arriving at the Iosco County Fairgrounds in Hale this past week, and not seeing the towering outline of a Ferris wheel and other carnival rides, was a bit unusual. However, organizers of the 76th annual event took the COVID-19 setbacks in stride, and brought to the venue as many activities as they were allowed.

The restrictions surrounding the pandemic caused the cancellation of such traditional fair favorites as the midway, Off-Road Demo Derby Bump N Run and pro rodeo. But coordinators still managed to pull off six straight days of entertainment, with a number of other events being made available, from July 27 through Aug. 1.

There were also some vending areas and educational booths set up during the event – the theme of which was, “It’s a Groovy Week at the Iosco County Fair.” Participating entities included Iosco County Farm Bureau, Pegasus Springs Therapeutic Riding Center, Up North Prevention and Young Living Essential Oils.

According to the Iosco County Fair Board, they didn’t want to cancel anything. To ensure the future of the event, though, they had to comply with executive orders handed down by the Governor, as well as orders from the local health department. While organizers note that the cancellation of such events as the rodeo and Bump N Run will be a hard hit financially, the youth of the fair are their number one priority.

As visitors can vouch, the young participants work long and hard, months in advance, to prepare for the annual occasion.

Among such exhibitors in 2020 was Sophya Sawielski, 11, Sand Lake. A member of the Iosco Oinkers 4-H Swine Club, she happily gave this reporter a rundown of the livestock displays, which included her hog “Jupiter.” Weighing 60 pounds when Sawielski first started out with the animal, the Hampshire cross has since reached a whopping 300 pounds.

The cute and catchy names the youngsters gave their animals also didn’t go unnoticed – with just a small sample being a pair of pigs named “Marvin Gaye” and “Rick James,” “Sriracha” the cow, “Macho” the horse and a sheep duo dubbed “Peter” and “Cottontail.”

Democratic organizer: We are playing by different rules

Despite the adjustments due to COVID-19, fair board volunteers Rick and Denise Braun said that each of the days were very pleasant, and that the activities this past week were met with excellent weather – as well as some awesome food options for fair goers.

This included a new addition for 2020, with the Fresh Kitchen food truck. Along with classic carnival snacks that were also available from other vendors, Fresh Kitchen served up some alternate choices, ranging from wraps, salads and paninis, to power bowls and fresh burgers.

Denise added that the livestock auction on Thursday was a huge success and, when speaking to this reporter on Friday, she said there were a ton of activities slated for the fair finale the next day.

Rick also noted that, while the 2020 occasion was indeed different from past events, it didn’t really take away much of anything.

This was echoed by Dennis Litzenburg, Allegan, who was one of the vendors at the fairgrounds. Operating as Denny Bob’s, LLC, he brought a large collection of pocket knives, T-shirts and other merchandise for visitors to peruse.

Along with running a store in Allegan where his products can  be purchased, Litzenburg showcases his items at numerous fairs and carnivals throughout the year.

Unlike other such events, he remarked that he didn’t run into a single issue at the Iosco County Fair. He had nothing but kind words to say about the visitors he encountered and he pointed out that, while business was a little slower because of the pandemic, everybody seemed to understand that this was not the fault of the vendors or fair organizers.

In fact, Litzenburg enjoyed his first appearance at the Iosco County Fair so much, that he says he has already committed to showing up for next year’s event.

Similar comments were also shared by one of the musical acts, Masquerade, who performed for the first time at the fair in Hale this year, and said they hope to come back in 2021.