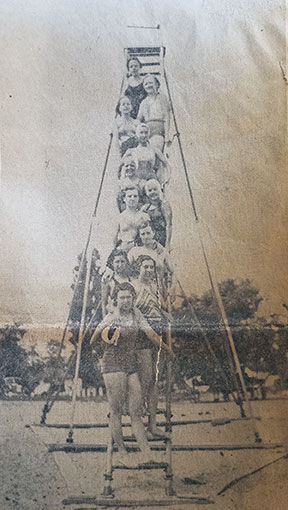 A bevy of bathing beauties posed on the state park’s giant slide in the 1930s. The picture was snapped prior to the start of the swimming season as the slide is high and dry on the beach. Slides were popular with youngsters, despite the number of fractured arms from falls. 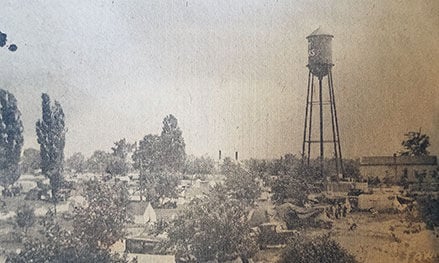 Campers at the then East Tawas State Park enjoy a campfire and Tawas Bay in the 1930s.

The East Tawas Park celebrated 100 years as a public park this year, since its establishment in 1920, with a transformation from an industrial center of East Tawas to a recreational destination for locals and tourists. The park and its related facilities has changed ownership, changed names, added amenities and transformed itself over and over in the last century. With the continued expansion and improvement to the park systems in both East Tawas and Tawas City, the public will enjoy scenic access to Tawas Bay and see the crowning jewel of northeastern Michigan for another 100 years and beyond. Read about the history of the East Tawas Park in this historical feature, reprinted from its publication in the March 30, 1977 edition of The Tawas Herald.

EAST TAWAS – The East Tawas City Park has a long history of public ownership. The property was first acquired by the city of East Tawas in 1891 and was utilized for a new industrial complex; it later became the site of an important state park and in 1965, completed a full circle of public ownership by revering back to East Tawas as a city park.

Dawning of the “Gay 1890s” was an era far removed locally from a feeling of prosperity – the hope for the future was rather dismal, in fact. Northeastern Michigan’s white pine era was finally coming to an end and two sawmills located on Tawas Bay at East Tawas had turned their saws for the last time. The idle sawmills on the property had been turned into ashes once the wheels stopped turning.

The picture began to brighten in the fall of 1892 when the new firm of Temple, Emery and Nelson Holland proposed to build an industrial complex on the site of the burned out sawmills, the city acquired property along Tawas Bay in the foot of Newman Street and turned it over to the new enterprise.

Work began immediately on constructing a new sawmill to handle pine logs, which were rafted and shipped across Georgian Bay and Lake Huron from Canada. The firm also constructed the Holland Hotel at the corner of Newman and Bay streets to take advantage of the tourist and resort business, which was then beginning to blossom as an important economic factor in the area.

The Tawas Bay area, which long had been considered one of the finest sheltered ports on Lake Huron, began to take on new hope when this new enterprise developed a substantial  industrial bloom. It all came to an end in 1897 when the supply of white pine logs from Canada was “dried up” by action of the Ontario legislature. Without logs, the mill could not operate and machinery was soon dismantled and moved to a new location in Canada.

The local business climate again took a bleak appearance  with the loss of this important industry. The huge commercial dock constructed at the foot of Newman Street, once a bustling port for shipment of manufactured lumber, soon fell into disrepair.

It was not until 1920 that the picture actually began to change. Development of the automobile  industry and improvement in the state’s road system had a dramatic effect on Northeastern Michigan, which was now just beginning to enjoy a surge of traffic from automobiles bearing downstate factory workers bent on summer weekend escapes from the blistering heat of the downstate area.

“Northeastern Michigan is going to be well taken care of by the recently organized Michigan Park Commission,” commented the Tawas Herald on May 14, 1920.

This newspaper’s lead story that the park commission decided to appoint two engineers to lay out parks which were taken over by the commission.

“The first work to be done in the east will be on the park which the City of East Tawas has donated along the lake front. It is adjacent to the Detroit and Mackinac Railway and the Dixie Highway,” state the Herald.

By 1921, the property which once served almost 30 years as the site for sawmill, had been transformed into a state park with picnic tables, benches and a well to provide water for campers.

“The community is fortune to have these accommodations  and a public park with such a desirable location,” stated the Herald. “It is evident that the people of East Tawas appreciate the advantage of a cool place on these hot days of summer as attested to by the large number of bathers to be seen at any hour of the day at the state park. The remark is often heard that ‘there is no finer bathing beach in Michigan.’”

Members of the state park commission inspecting the new facilities were entreated at the Tawas Beach clubhouse for dinner by the East Tawas Board of Commerce. Development of the state park also saw improvements being made to the old commercial dock for the ever-increasing use by pleasure boat owners. Construction of the East Tawas community building, which was financed through countrywide donations, was completed in May 1921. This building offered new facilities for public gatherings, recreation activates and also contained an office for the state park manager. Early park rangers at East Tawas included Simon Cuple and Earl Gentry.

Use of the East Tawas State Park grew by leaps and bounds as traffic through the area saw a rapid expansion and opening of the new concrete Huron Shore Road –US-23 – Provided an even greater use of park facilities.

As part of the Works Progress Administration in the mid-1930s, designed to put men back to work during the depths of the national business depression, a new dock was constructed at the foot of Newman Street. This new facility added greatly to the utilization of the state park, which was rapidly becoming one of the most popular in the state. In addition, the former railroad depot located west of the US-23 and Newman Street intersection was removed during the original highway construction project of 1932.

Campers at East Tawas had the advantage of being within walking distance of stores, theatre, post office and other conveniences provided by the Newman Street shopping district while at the same time and the opportunity to enjoy camping, swimming and boating facilities offered along the shore of Tawas Bay.

This use was expanded rapidly in the 1930s and, just prior to the state of World War II, the state park dock was again improved under a new state financed project. The dock became headquarters for several perch fishing party boats. The war years proved to be particularly busy for the state park. Due to automobile, gasoline and tire limitations because of the war effort, East Tawas State Park was used heavily by downstate motorists during the summer months.

Over the years, the state park diminished in size somewhat due to widening of US-23, construction of the state police post at the east end and the water filtration plant west of Newman Street, but the excellent facilities provided by the state were adequate.

In June 1955 Governor G. Mennen Williams formally dedicated and then turned over the public the new Waterways Commission Dock. A crowd of several hundred spectators gathered at the base of the new structure to witness the ceremony.

“Welcome, Governor Williams” banners were posted through the community and the governor was welcomed by Mayor Elmer Werth and Carl Babcock, chairman of the East Tawas Harbor Committee. Harbor Master was Joseph Fox.

Construction of the new dock was a major development in the expansion of boating facilities on Tawas Bay. In 1963, the recreation business here received a serious jolt when a flash fire caused heavy damage to the dock and repairs were completed until the summer of 1964.

Prior to the fire, the state acquired 175 acres of land on Tawas Point which had been declared surplus by the federal government. A state park was opened there on the limited basis in July 1961 and construction soon saw development of a new and larger state park.

Negotiations were commenced immediately by officials of East Tawas and the former state park was returned to the city effective January 1965.