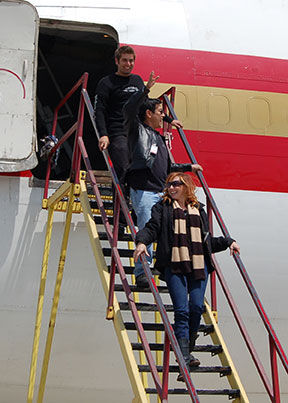 The Mythbusters, from top, Tory Belleci, Grant Imahara and Kari Byron, appear to be arriving in Oscoda on a 747 jet, but are really just filming a segment for the show. 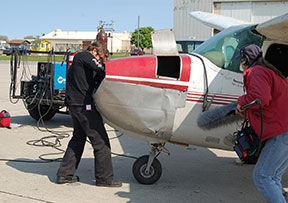 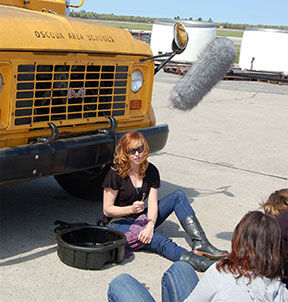 Kari Byron gets direction from the Mythbusters film crew, moments before she drains the oil from an Oscoda Area Schools bus.

Like me, many grew up watching television programs like Mythbusters in their youth. The show, which started in the early 2000s, was extremely popular and provided hours of cool experiments, and even some educational entertainment. I had the pleasure of getting to meet a few of the cast of Mythbusters when they came to the Oscoda-Wurtsmith Airport to test a few myths back in 2007.

Those myths including whether the jet engines from a 747 could tip over vehicles, including an Oscoda Area Schools school bus. The community stepped up, with Kalitta Air providing the aircraft and the school providing an old bus. Spoilers for those who have not seen the episode, but the jet wash from the aircraft can easily make a school bus fly.

It does not mention this in the story, however, because in order to do the story I had to agree to keep the experiment results secret, though many in the community heard before hand and were on site to video the event, with the results put on the Internet.

With the recent news of the untimely death of one the of the show’s hosts, Grant Imahara at the age of 49, we decided to rerun this story, which first appeared in the May 30, 2007 edition of the newspaper, to remind the community of the tall tale that really did happen in Oscoda.

OSCODA – Popular urban legends often start as rumors with a seed of truth, but an event which will fold into future Oscoda lore, started with a fact: Cast members from TV’s Mythbusters made an appearance in Oscoda.

According to the show’s associate producer, Linda Wolkovitch, it all started three weeks ago when she contacted Kalitta Air officials about using one of the company’s large 747 aircraft to “bust” or confirm a myth.

The experiment, which was conducted May 22, was an attempt to rehash an old myth that the show’s main hosts, Adam Savage and Jamie Hyneman, tried to prove in the first season of the show, and was filmed as part of a two-hour supersized myths special, which will air in the next three months.

In the original myth, called “Jet Taxi,” Wolkovitch said the team experimented with an urban legend that a passenger who was late for the airport requested that a taxi driver take them out on the runway to where a 747 passenger jet was located.

As the myth goes, the subsequent jet wash, or thrust exiting the engine, completely flipped over the taxi.

Adam and Jamie, in their usual fashion, attempted to set up similar circumstances with a different type engine but, according to Wolkovitch, the plan was scrapped at the last minute for insurance reasons.

“The myth test failed because they couldn’t open the engine up full bore,” she said.

This time, it’s different. The show is going larger in an effort to rehash some of the myths –  but  in a more spectacular fashion.

In addition to an old car painted to look like a taxi and a decrepit single prop aircraft, the team acquired an old Oscoda school bus,  numbered 82-A.

Wolkovitch said the cast members were ecstatic at the access her team had on the Kalitta property and was enthralled at the sheer size of Wurtsmith, as well as an old 747 being disassembled – possibly a prelude to what would come – next to a filming location.

Broadway in Detroit hopes to bring 'Hairspray,' 'Mean Girls' and 'Hamilton' to the Fisher Theater next year

“This is so perfect,” said cast member Kari Byron. “Everyone is so great.”

Before the experiment was conducted, the cast members and film crew had to prepare the vehicles. Byron was again thankful for the Kalitta crew that helped with this.

“Normally, we don’t have all the equipment to do this type of work,” said Byron about filming on location.

It is a myth that the Mythbusters don’t do their own work. The notion that the cast members only do enough work on camera to get a shot  is also false.

Cast members Grant Imahara and Tory Belleci really modeled a junk car to look like a taxi. Metal was welded into the small single engine plane to represent engine weight and all the work was done by Belleci, donned in a welding mask.

Even Byron didn’t disappoint as the tomboy with good looks who isn’t afraid to get a little engine oil on her arm or turn a wrench in the name of mythbusting.

That being said, cast members did admit they felt like they were on vacation with all the help from the Kalitta crew.

All this was filmed by the show’s skilled cameraman, Peter Heap, and sound mixer, Alison Rider. According to Wolkovitch, around 80 percent of the footage will end up on the editing room floor.

The money shots, explained Heap, will hopefully be collected by small, HD remote cameras installed in the bus. The cameras are placed in the vehicles in packing peanuts in hopes of capturing a shot of whatever happened when a bus is in the jet wash of a 747.

Kalitta representative Don Nolan was happy to have the crew film in Oscoda. According to Nolan, Kalitta planes are no strangers to show business and have been used in several major movies.

He added that Kalitta employees who got to witness the results of the experiment – whatever that may have been – got a real kick out of the whole situation. He said this may not be the last time Oscoda sees the Mythbusters crew.

“They were very excited and want to have other stuff out here,” he said. “We are lucky to have an airport authority that will let us do this kind of thing.”

He also added that he would like to thank Oscoda residents for putting up with any added noise or inconvenience which occurred during the shooting.

OAS Transportation Director Vera Middleton saw the chance to donate the bus to the show as an educational opportunity for Oscoda’s youth.

She said the bus was not operational and used for spare parts and the storage of scrap metal. She added that the bus wasn’t a huge loss for the school.

“It’s a good thing,” Middleton said. “There is so much bad on TV and this is something that is interesting for kids and has a lot of scientific aspects.”

Although the results of the tests are intended to remain a mystery until the Mythbusters segment airs, some video footage, not taken by the crew, was been placed on the Internet without permission.