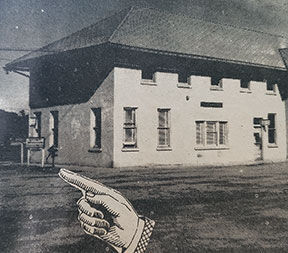 Public water pumps began disappearing in the 1930s from Iosco County. This pump at the Detroit and Mackinac Railway station in Tawas was still utilzed by the public until the 1950s. 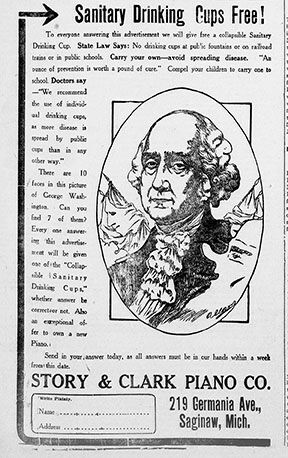 This advertisement that appeared in the 1911 edition of The Tawas Herald offered a free reusable cup, that could be used at public drinking sources, if you filled out the contest and mailed it back to the company.

Open the pages of this newspaper on any given week and the topic of potable drinking water is on its pages. A fresh source of drinking water, and the need for it, has been an ongoing concern for humans since time immemorial. The current topic of drinking water r concerns pollution, but in the newspapers of yesteryear a concern was communicable diseases that could be passed from person to person using “public” drinking cups at fountains. Read about the public drinking cup, and the elimination of the public disease spreader in this historical feature that originally ran in the March 23, 1983 edition of the Oscoda Press and Iosco County News-Herald.

TAWAS CITY – A hobo was once observed at the railroad station in Tawas City using a rather peculiar method of drinking water out of a public cup.

This experienced traveler of the “rods” appeared to be contortionist – holding the tin cup to his right hand, he turned it around so as to drink out of the left side of the vessel near the handle.

His curiosity understandably aroused, a local newspaperman waiting at the station platform made an inquiry as to the reason why the hobo was drinking water in this fashion. The immediate and piqued response was “I don’t want to catch germs!” The above incident apparently happened during a small pox outbreak in the county.

One must be middle-aged to remember a public drinking cup attached to a pump, or even a hobo – both disappeared  from the scene in the 1930s , but more than a few people will recall using similar methods to find a “sanitary” place to drink out of a public cup.

Right-handed persons often held the cup in the left hand; some quaffed a drink from the outer edge of the rim opposite the handle; not a few used the hobo’s placement of lips near the handle and a few even tried to drink without the mouth touching the cup!

Some years were to pass before the disposable paper drinking cup came into being – a noted national advertising campaign showed a railroad conductor assisting a young passenger at the drinking fountain – paper cup were used, naturally.

Dr. Joseph Lister (1827-1912) introduced the general principals and practice of antisepsis and antiseptic surgery, but this nineteenth century “germ theory” was not immediately accept by the medical profession; many years were required, too, for the general public to accept the theory of Listerism – that microscopic bacteria can cause disease.

An advertisement printed in the Oct. 13, 1911, issue of The Tawas Herald offered free sanitary drinking cups to subscribers. “State law says no drinking cups at public fountains or on railroad trains or in public schools. Carry your own cup – avoid spreading disease. An ounce of prevention is worth a pound of cure. Compel your children to carry one to school.”

In its offer for free collapsible drinking cups, the announcement said that doctors recommend the use of individual drinking cups, “as more disease to spread by public cups than in any other way.”

OR Gov. on out of control wildfires: 'Climate change is here'

Through such promotion programs, it was a wonder that public drinking cups were still to be found in the 1930s and even later. In the Sept. 26, 1913 issue of the local newspaper a three-minute “talk” was entitled “The Unwashed Cup; how to drink beautifully and decently.”

“The unwashed cup – do you use it? Do members of your family use it at home or elsewhere?

“If you do, it is up to you to wake up and realize you are not only behind the times, but so far as this practice is concerned it is the stone ages of civilization.”

The article, prepared by the Association for the Prevention and Relief of Tuberculosis, point out that the trend of all centuries “is away from gregariousness of the primitive man and toward the privacy and individualism of modern life.

“In thought and action, men are becoming more social, but in habits of living, more individual.

“In the dark corners of the world today, you will find people eating form one dish, smoking a common pipe, bathing in a common tub. Do you want to be classed with these people?

“You stopped using a family tooth brush several generations ago, Why do you continue to use a family, or worse, a school or railroad station cup that is practically certain to have been used by uncleanly and diseased people and cannot be cleansed by rinsing?

“Be up to date – throw away that dirty, dripping dipper and unspeakable dish cloth; use some real hot water and soap powder or soda on family glassware and carry your own paper or metal cup with you whenever you go in public.”

Those words were written a year after the death of noted English surgeon responsible for the germ theory; but, it was to be many years before the public cup finally was removed from neighborhood water pumps, railroad station platforms and other public places.

Over the years, an enlightened public and its agencies have caused enactment of numerous laws to protect public health. Today, many of the innovations of the early 1900s are taken for granted, but new developments in the chemical manufacturing industry have led equally sinister problems in protecting public health.

Protection of this state’s ground water supply from pollution, for example, is one area of current concern. Protection of the drinking water supply is no less important today than it was early in this century, when the first step toward banning the public drinking cup was undertaken.