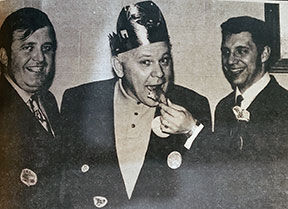 Ed Gordon, right, feeds a piece of fried perch to the 1970 Perchville King Chuck Waters, a WNEM television personality from Bay City. He was crowned by the 1969 Perchville King, Barry McQuire, pictured at left. 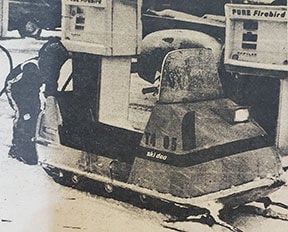 Ted Phillips fills up his Ski Doo snowmobile after a huge snowstorm filled up Iosco County in the winter of 1970. 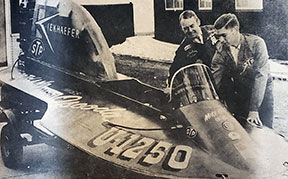 Mike Reed, left, and Chuck Linneman, right, examine the Miss Oscoda, a drag racing boat they were working on racing in the 1970s. 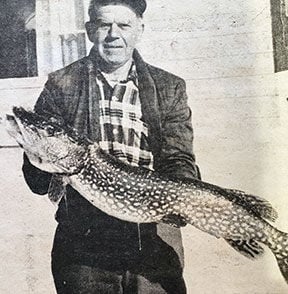 OSCODA – As is tradition, the Iosco County News-Herald and Oscoda Press takes an annual look at what news stories were impacting the community 50 years ago. This year we take a look back at the happenings of 1970, in a two-part feature, with the first featuring front-page headlines from January through June of that year.

Check out next week’s editions for snippets from July through December of 1970.

Iosco County’s first baby of 1970, Melissa Lynn Smith, was born on Jan. 1 to Sgt. and Miss Jack M. Smith of Wurtsmith. Melissa weighed in at 13 ounces, and was 20.5 inches long and was the Smiths’ first child.

The Michigan Department of Transportation met with AuSable Township Officials to discuss the replacement of the US-23 Bridge over the AuSable River.

Oscoda and AuSable Township officials met to discuss the idea of combining the townships into one single charter township. Organizers planned to circulate petitions for the potential move.

A dune buggy rally came to Oscoda to race dune buggies on a frozen Van Etten Lake for the first time. According to organizers, more than 18 dune buggies were in attendance at the event.

The Iosco County Board of Commissioners received a report from Sheriff Ivan O’Farrell who told commissioners that in the area of “serious crime” in the count there were 114 jailed for felonies as compared to 73 the previous year. He said while the number of automobile accidents increased from 251 to 283, personal injury accidents dropped from 107 in 1968 to only 52 in 1969.

Perchville was deemed a success for the year, where WNEM TV personality Chuck Waters was crowned Perchville King at the Buckhorn Inn in Tawas. There were estimates of more than 10,000 to attended the annual event.

Arnold Bade took first place in a March fishing derby that took place on Van Etten Lake. The fish weighed in at more than 17 pounds. The event was hosted by the Van Etten Lake Sportsman’s conference and Oscoda-AuSable Chamber of Commerce.

A professional police organization which was to eventually negotiate on behalf of the Iosco County Deputy Sheriffs was formalized in Tawas City. The Charles V. Miler Lodge 139, Fraternal Order of Police, encompassed Iosco and neighboring counties.

Organizers for the 22nd for the then “AuSable River Canoe Championship” planned to run the race after not running it the prior year in 1969, though funding issues were causing hiccups. Organizers reported around 30 participants and around $3,500 in prizes

Shore erosion on Lake Huron was slated to be the topic of discussion at the 1970 annual meeting of the Iosco Soil Conservation District. The meeting was scheduled, with a dinner, at the Tawas Area High School.

The AuSable Township Board of Trustees rejected the proposed merger with Oscoda Township by a vote of 4-1. A week earlier Oscoda Township residents indicated their intent to move forward.

Tawas Bay lost its ice for the season the week of April 15, according to the newspaper’s official ice watcher Mrs. Frank Guest. She reported that it lost its ice at the same time the year before.

An increased county valuation and projected fees allowed the Iosco County Board of Commissioners to adopt a record $655,520 budget for 1970. The increased budget was covered with added fees and a valuation hike for the county.

Arson was suspected by the U.S. Forest Service in nine different fires that were fought in Iosco County north of Five Channels Dam.

Officials announced plans for the replacement of the Mill Street Bridge in Iosco. A temporary bridge was to be placed in the location for the $200,000 project.

A fire truck crash in East Tawas was being investigated. Volunteer Firefighter Thomas Dillon, 35, lost his life when the tanker truck was he was driving rolled over at the north end of Newman Street and Tawas Lake Road in East Tawas, as he responded to a grass fire.

The Water Resources Commissioner of the Michigan Department of Natural Resources, ordered Oscoda Township to cease polluting the AuSable River with waste by one of two methods. One, cap off drainage pipes, or two, created a water treatment plant by 1972.

A $2 million housing project in East Tawas for seniors, with 80 units, was in the works in June of 1970. Forty acres for the project, located at the northern end of Wadsworth and Airport Road, were picked for the project.

Wurtsmith Air Force’s future was commented on by Colonel John W. Burkhart, 379th Bomb Wing commander, who assured the public that the base would remain open for decades to come.

John Voight and Dustin Hoffman light up the silver screen in Iosco County movie theaters in the movie Midnight Cowboy.

At the grocery store

A person shopping for groceries in 1970 could get chuck roast at 59 cents a pound or a package of Jell for 19 cents. Peaches were three one point containers for 69 cents and a can of Comet cleaner was two for 29 cents.