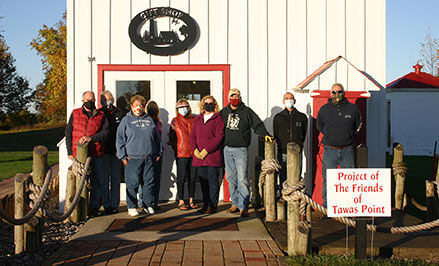 Eleven members of the Tawas Point Lighthouse and State Park, nine of whom are pictured above, volunteered 287 hours into the gift house restoration. A new sign, pictured above the doorway, designed and created by Kim Sanford of Sanford’s Metal Works in AuGres. 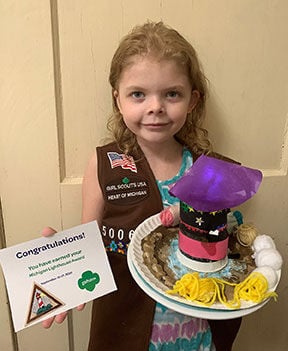 EAST TAWAS – Despite the high water levels and the closing of the lighthouse this year due to the coronavirus restrictions, the Friends of Tawas Point Lighthouse and State Park, in conjunction with the Michigan Department of Natural Resources (DNR) and Michigan History Center, were working behind the scenes to preserve and make the Point as accessible as possible during this season.

According to Vicki Seltz Barnes, Friends marketing and public relations chairman new this year is a “Virtual Lighthouse Tower Tour.”

“The Friends conceived a new way for our visitors to climb the lighthouse tower, which is the most popular activity for visitors any time of year,” said Barnes. “Response to the virtual tour has been great as Alpena’s Channel 11 featured the tour on National Lighthouse Day in August, eight Heart of Michigan Girl Scout Council Brownies from the Bay City area virtually climbed the tower to earn their lighthouse badges, and 25 members of the U.S. Lighthouse Society enjoyed a tour of the park and lighthouse area during August. Many other lighthouse lovers have viewed the climb online.”

Barnes said the virtual tour helped meet the DNR’s accessibility goals and was the first of the Michigan History Center’s sites to provide a virtual tour this summer. The virtual tower tour can be taken on the Friends website at https://www.tawaslighthousefriends.com/virtual-lighthouse.

She said the Friends group plans to prepare additional virtual tours for our website and Facebook page in the future to assist those not able to visit the lighthouse physically.

“The seasons continue to change on Tawas Point as we are aware of different colors and sounds during a crisp morning walk at the Point,” said Barnes. “The monarch butterflies have had their annual September Point gathering and are on their way to warmer climates, and many birds have also ‘flown the Point’ in favor of warmer habitats.

“We’ve even seen those skiffs of snow reminding us that despite what may be going on in the world, the seasons of life move forward, and we must move along with it, too.”

She said the holiday season is coming up and those who are looking for unique gifts for family and friends, the Friends group is just releasing our newest Tawas Point Lighthouse holiday cards, as well as note cards, prints and apparel that can be found nowhere else. They can be found online at https://www.tawaslighthousefriends.com.

She said the artwork has been done by photographers and artists from the region and donated to the Friends organization as fundraisers to help support various Tawas Point Lighthouse and State Park projects.

Barnes said no matter what season, Friends members are always amazed at how many people are drawn to Tawas Point:

• They watched as Lake Huron kidnapped the second pond near the pavilion.

• They came out to see the winter and spring storm damage.

• They walked the dunes from Lake Huron shore to Tawas Bay shore.

• They camped in the campground in strong numbers.

• They looked for a scrap of beach to sit on and enjoy.

• They visited the Lighthouse even though it is closed for the season.

• They read the Historical Marker and the names on bricks in the brick pathway project.

• They enjoyed the first phases of preservation and restoration of the historical Oil House.

• Even the Appledore sailed past to visit!

The historic Lighthouse Gift Shop building underwent a restoration. According to Barnes, the gift shop building exterior was restored to a new “shine” by 11 Friends members who, socially distanced and masked, volunteered 287 hours into the gift shop’s restoration, native plantings on the path surrounding the gift shop and a major upgrade in terms of In an update of Tawas Point State Park/East Tawas Harbor, Micah Jordan, state park supervisor, reports the park and harbor did well with camping and slip nights, even with the many campsite closures due to high water.

“It was amazing to see the outpouring of support from the campers this year even with the late start to the camping season,” Jordan said.

He said a major project for the park during fall was building up some of the most flooded campsites. Jordan said the park has purchased black dirt and will commence placing that dirt to fill the low areas. He said soil placement will be followed by seeding with the intent to grow new grass by the spring camping season to lessen the number of areas that are greatly affected by high ground water, come next spring, if the lakes levels stay consistent.

Barnes said given current health and environmental issues, all event information remains tentative for the remainder of 2020 and 2021.  Event dates will be confirmed and announced as factors change.