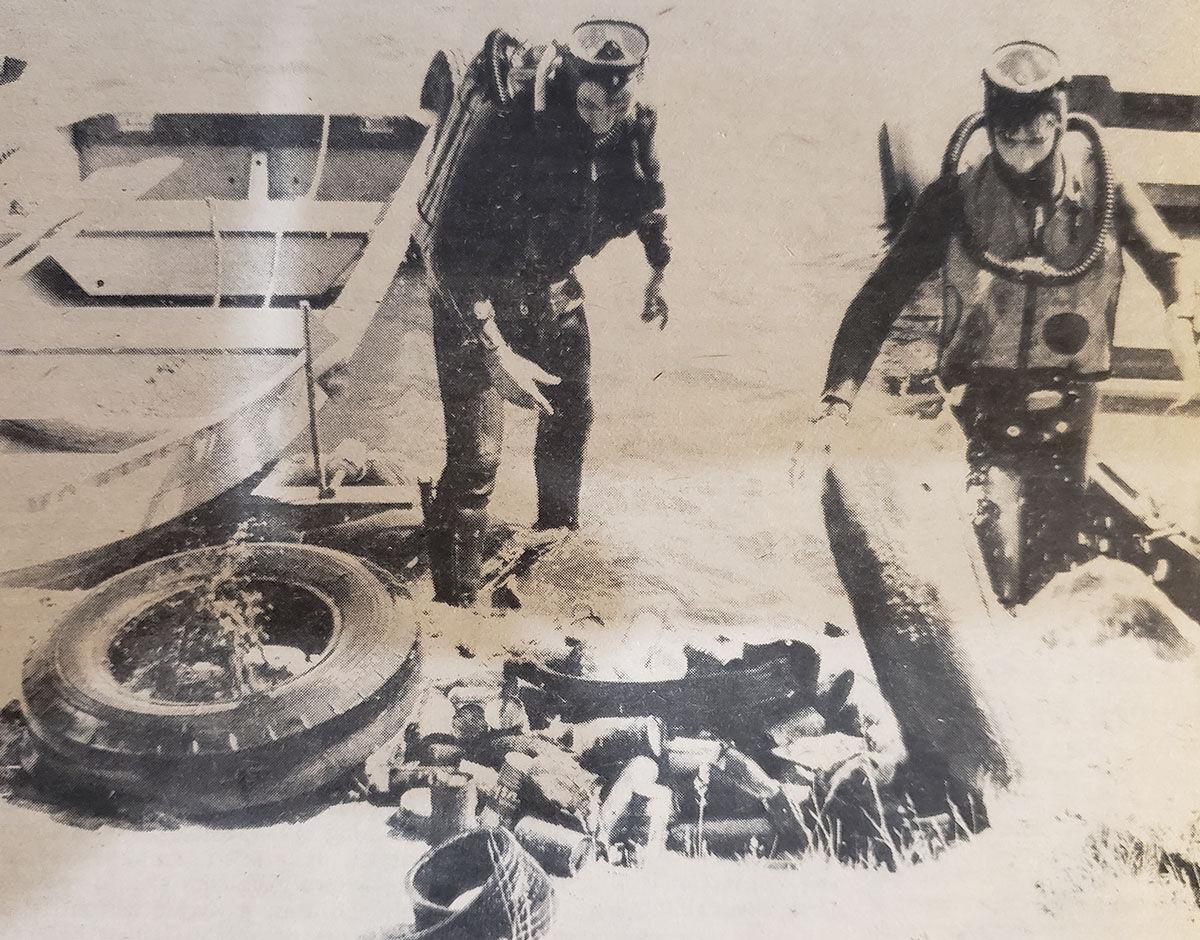 CLEANUP – William Parsons, left, and Mike Paslaski, right, deposit rubbish they pulled from the bottom of the AuSable River at Foote Site while scuba diving. 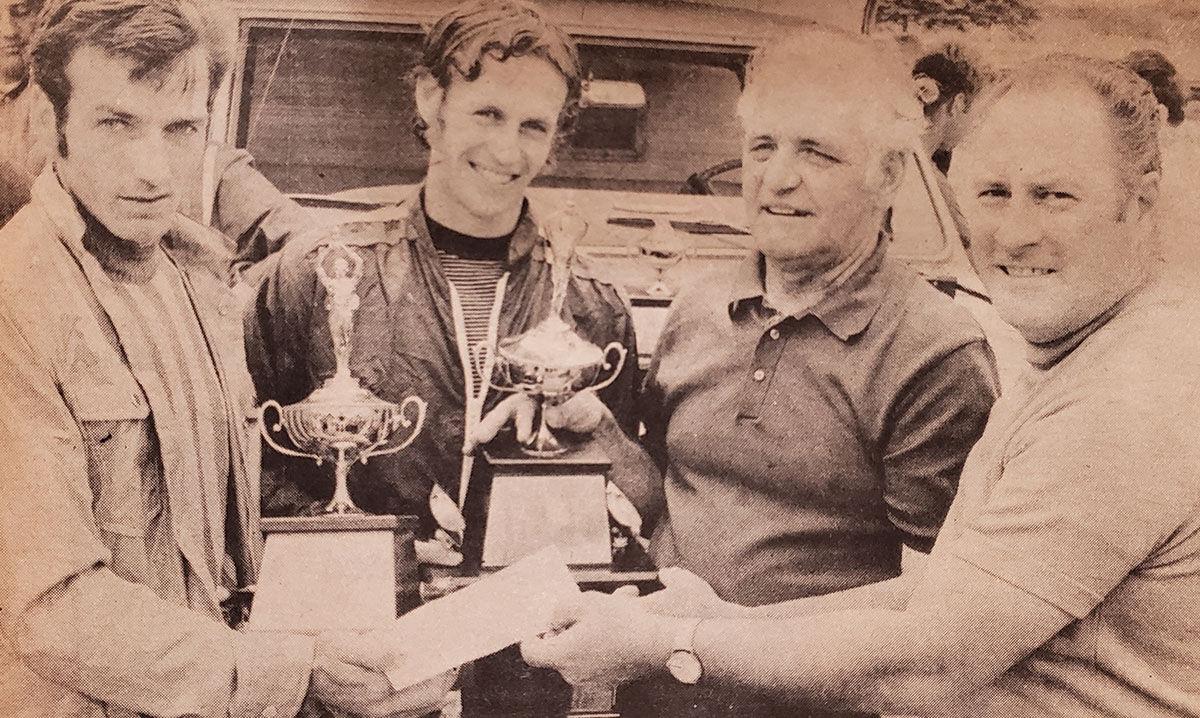 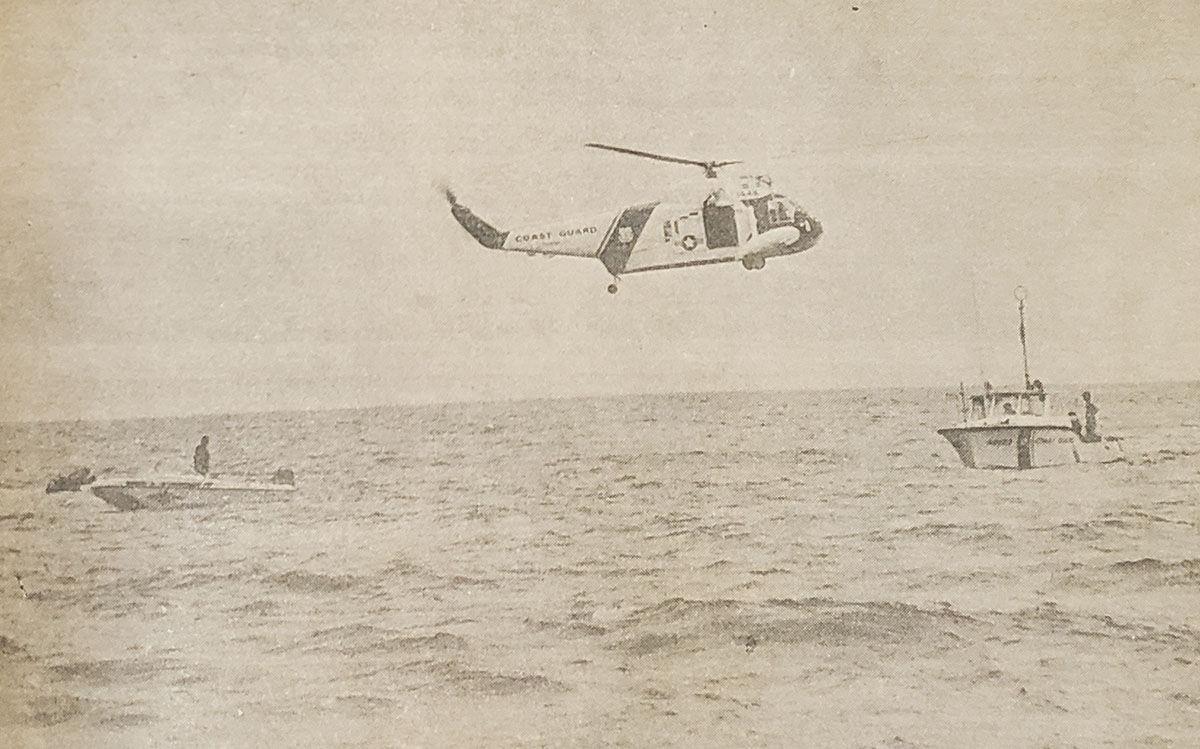 THE SEARCH – A U.S. Coast Guard helicopters and patrol boats search for a drowning victim at the Oscoda Beach Park. 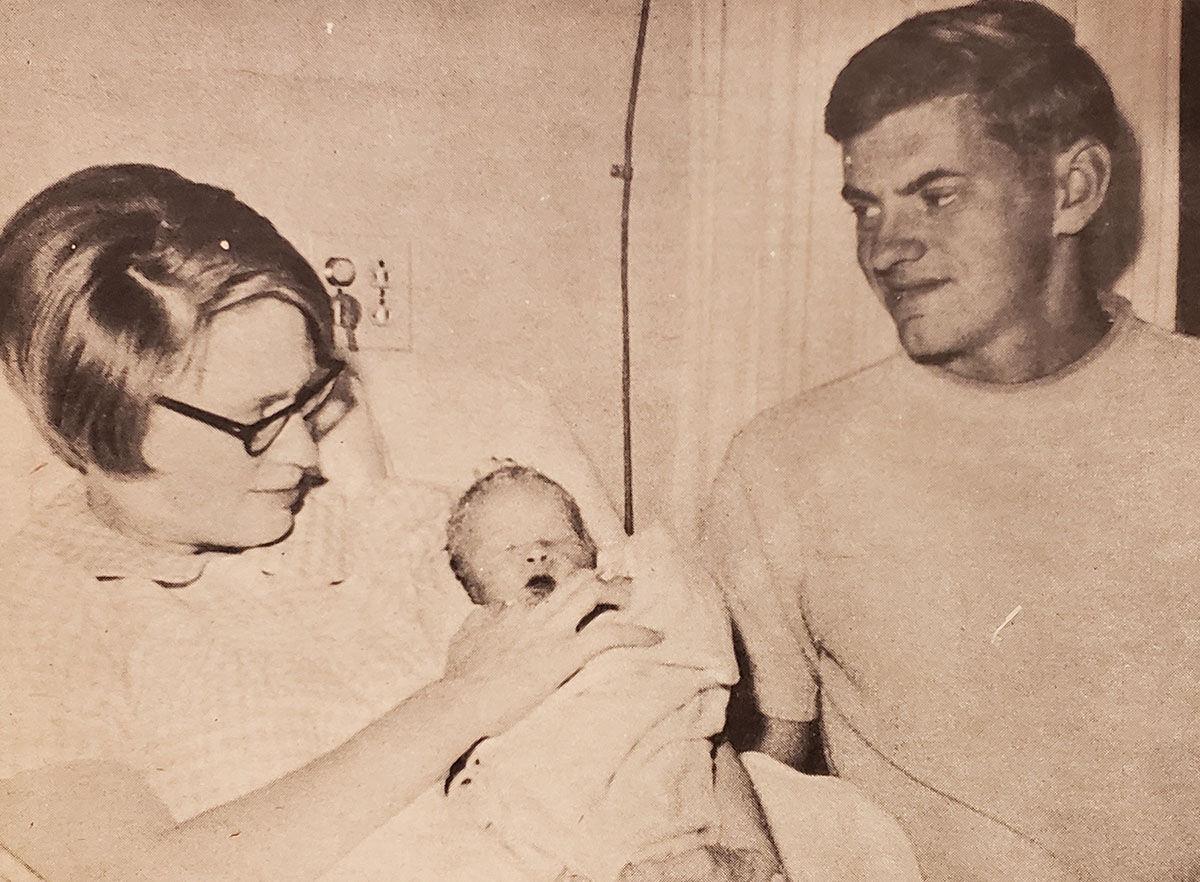 RECORD BABY – Mr. and Mrs. Howard Alverson display their son, Christopher Wayne, who had the unique distinction of being the 7,000th baby born at the Tawas St. Joseph Hospital. 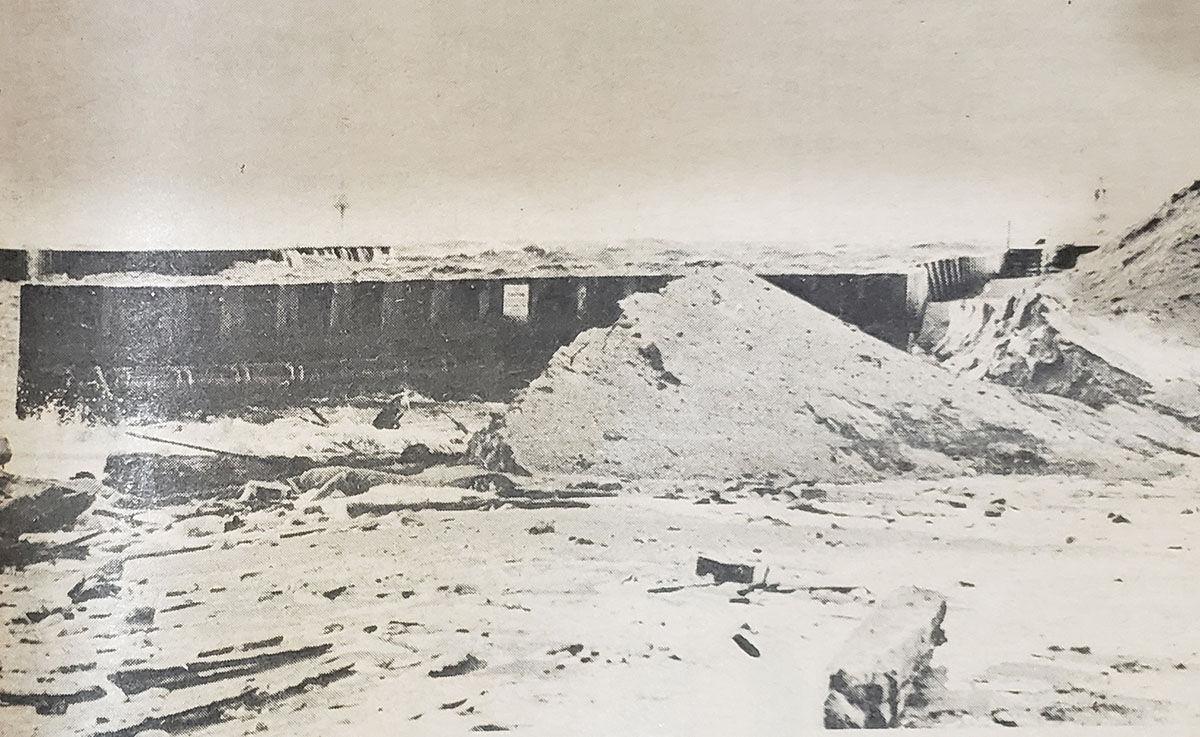 High winds across Iosco County’s shoreline, including at the AuSable River mouth, caused damage to public and private property in 1970.

OSCODA – As is tradition, the Iosco County News-Herald and Oscoda Press takes an annual look at what news stories were impacting the community 50 years ago. This year we take a look back at the happenings of 1970, in a two-part feature. Last week’s feature looked at headlines from January through June of that year. In this week’s feature, part two of two, we will look at headlines from July through December of 1970.

Organizers for the AuSable River Canoe Marathon reported in early July that there were around 25 teams entered for the annual race.

The Michigan Department of Natural Resources completed their project to plant more than 250,000 rainbow trout into Lake Huron between the Tawases and Alpena.

Taking first place in the marathon were Luc Robillard and Claude Corbin of Quebec. The pair finished in record time winning with a finish time of 15 hours and 42 minutes.

A Tawas man received 15 days in jail and a $103 fine for his conviction of using indecent language in the presence of a female.

J.J. Cramer of Middleport, New York, stunned many area residents as he passed through the area on his horse, with his five-month year old timber wolf while en route on a trip around the world.

Winds of up to 75 miles per hour raked across the county causing damages.

Members of the Iosco County Sportsman’s Club were disappointed to find that more than 100,000 walleye fry planted in a Wilber pond for eventual release in Lake Huron were nowhere to be found. Members speculated the fry, which had grown, were eaten by predators.

The low bids for the expansion of the Tawas Hospital, came in at just over $1.2 million. The expansion plans included a new wing, heating plant and modernization of the facility’s kitchen.

Iosco County Sheriff’s Office deputies searched for two large marijuana patches growing in the southwest portion of Iosco County. The deputies were working off tips from an anonymous source.

An airman from Wurtsmith Air Force Base drown in an accident at the Oscoda Beach Park while trying to give assistance  to a swimmer in distress. Sgt. Morman J Wahlemmayer, 23, drown while trying to save a 14-year-old girl. The U.S. Coast Guard responded in an attempt to try to find Wahlemmayer’s body after his drowning.

Tawas Point had a new electronic fog horn installed, replacing the old air powered fog horn that was at Tawas Point for years.

Wurtsmith Air Force Base was deemed Logair Station of the Year by the air force’s logistics command.

School reopened in September for 4,400 Oscoda Area Schools after their teachers went on strike for four days.

Two fireman with the U.S.  Forest Service returned from Washington State after helping fight fires there. The firemen were John Ristow and Thomas Wilson, who spent almost two weeks in Washington helping fight the flames.

The 7,000th birth at the Tawas St. Joseph Hospital occurred in September with the birth of Christopher Wayne Alverson to Mr. and Mrs Howard Alverson. At that point the hospital had been around for 17 years, with an average of 411 births a year at the hospital.

Oscoda canoe racers Stan Hall and Ralph Sawyer were given plaques in October proclaiming them the second best professional canoe racing team in Michigan by the Michigan Canoe Racing Association.

The Health Officer of District Health Department No. 2 warned that the whooping cough sickness was on the rise in Iosco County during October.

Members of the Iosco County Board of Commissioners, and the Iosco County Parks and Recreation Department, gathered at the Oscoda Beach Park for a groundbreaking ceremony marking the construction of a new $46,000 service building at the location.

Steven Paslaski was named the 1970 Citizen of the Year by the Oscoda/AuSable chamber of commerce.

The Iosco County Clerk’s Office reported a relatively light turnout for the 1970 general election with only 5,800 individuals turning out to vote in county races. Included in the voting was approval by Oscoda Township voters to convert the township into a charter township.

The Oscoda Owls Varsity Football Team finished the Northern B Conference season with no defeats, besting Standish-Sterling in the final game with a 36-16 victory.

A performance by The Ink Spots, was scheduled in Tawas at the Tawas Golf and Country Club. The act included others from the Ed Sullivan Show All Stars.

Members of the Michigan Department of Natural Resources remarked that the deer season for 1970 in Iosco County was a poor season, with fewer kills than in previous years.

High winds damaged the Lake Huron shoreline, eroding beach and threatening homes on the shoreline. The storm even washed out parts of the Oscoda pier, causing damage.

According to an end of the year story in the Oscoda Press, traffic crashes in the county claimed 13 lives, which was an increase of two from the previous year.