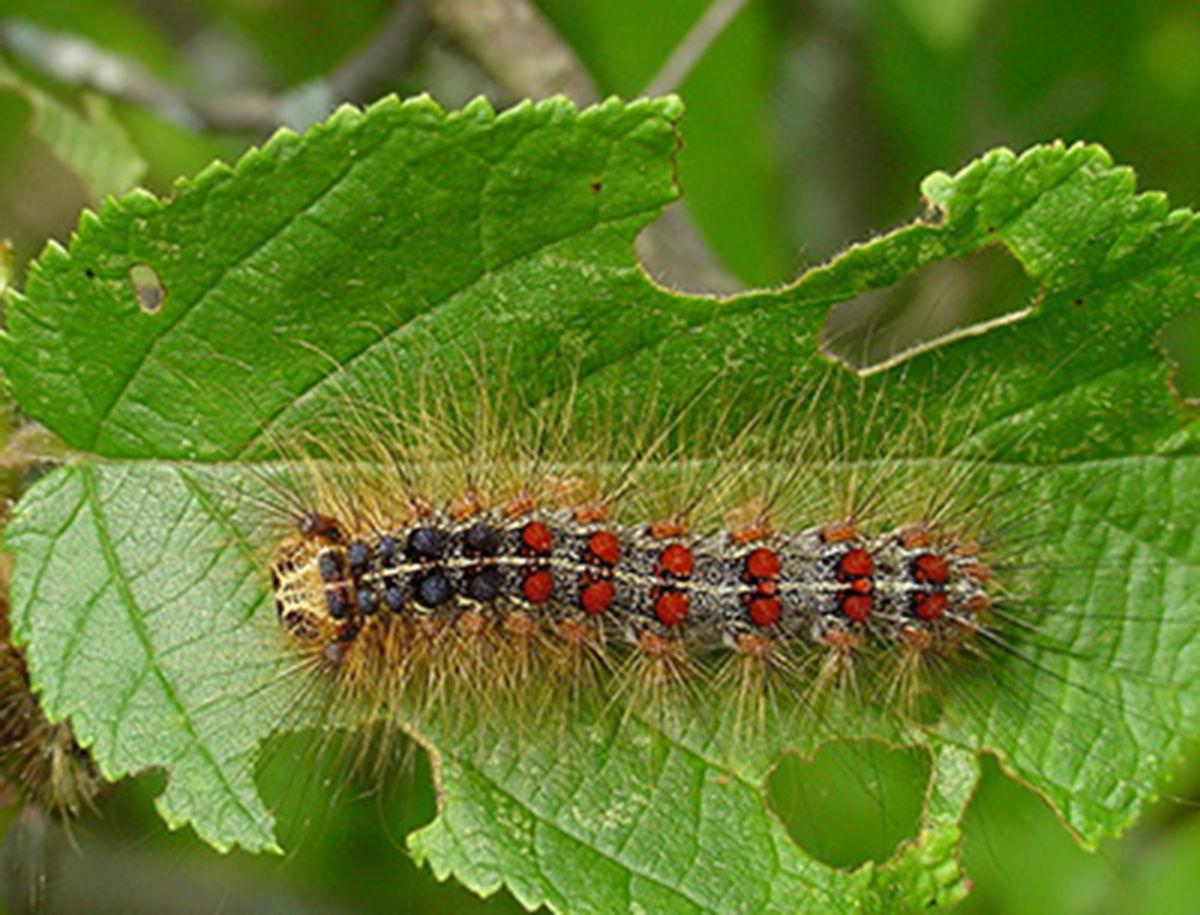 THE CATERPILLAR – This closeup photo of a gypsy moth caterpillar, from the Michigan State University Extension, shows detail of the destructive worm, and what it can do to trees and other foliage. 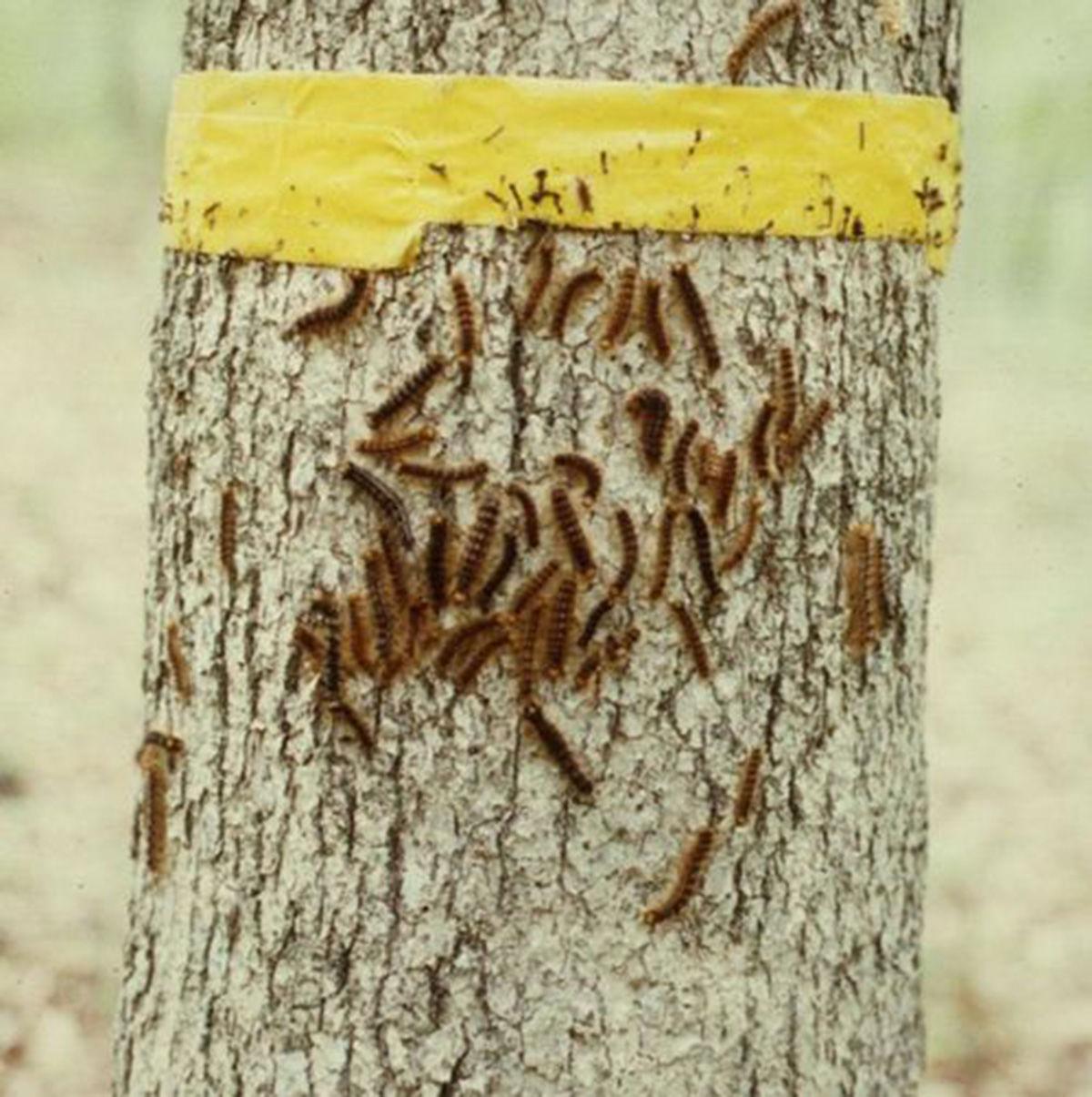 MITIGATION – A cluster of gypsy moth caterpillars attempt to climb up a tree but are stopped by a sticky paper ring. Residents in northwestern Iosco County have complained the worms this year are very bad in that area.

TAWAS CITY – Iosco County voters could see a millage question on the November ballot in an effort to generate funding to mitigate gypsy moth damage.

The millage question would be the first one of it’s kind since the 1990s, according to discussion from the Iosco County Board of Commissioners, which met July 1 via video conferencing for a meeting.

Many in the northwest part of Iosco County, including the Plainfield Township area, have complained about an infestation of gypsy moths and their resulting caterpillars, in recent weeks.

During a public comment section of the meeting, county resident Roger Hoodoff expressed his dismay at the gypsy moth issue and suggested the county pursue a millage to help spray chemicals that would keep the moths and caterpillars at bay.

“They are bursting into a real problem and have exploded across the county,” he said. “Ogemaw County is trying to get ride of them. Glennie is just buried in these worms and the U.S. Forest Service would like to spray, but it would be useless for them to spray if we don’t spray.”

Hoodoff said that the worms are affecting the quality of life for some residents, and said the caterpillars are everywhere from trees, decks, houses, and leave their feces on property, in addition to their destructive nature to trees.

“What I am here for is to make a request that the county commissioners put a renewal for the millage for the control of gypsy moths, so that the people can decide if they want to pay for this or not,” he said.

In the past Iosco County has paid to have portions of the county sprayed in the springtime to mitigate the spread of the moths, but this year experts weighed in on the potential chemical treatment of the moths this winter during a February meeting.

The upshot of the opinions of MSUE Consumer Horticulturist Sarah Rautio and District Forester Eric Brandon, at the time, was that the county should hold off on spraying and let natural predators take care of the caterpillars.

Back in April of 2019, commissioners voted to hire Aquatic Consulting Services of Sanford to conduct a study at a cost of $8,567 to determine if spraying for the caterpillars and moths would be needed.

Rautio advised that the county should wait on spraying for the moths and instead let a fungus that was introduced years ago kills the caterpillars.

“It seems to be one of the top predators and the fungus hits when we have a wet spring,” she said. She said in other areas of the state, to see the fungus really get into action, the caterpillars have to have an ‘up’ year where there are large numbers, then the fungus takes charge and wipes out the caterpillars naturally.

“The predator kicks in about two years after the prey get up, we have seen these gypsy moth numbers go up, so now we have to wait for a couple years to kick in,” she said. “I want people to be aware of the fact that we do have some natural controls out there, but it doesn’t mean you can’t consider a spray program, it’s just determining whether or not you think it’s necessary.”

At that time commissioners opted not to do spraying in the county.

During the July 1 meeting MSUE District 4 Interim Director Julie Darton said that there have been many calls by the public to her office for advice on what to do about gypsy moth and caterpillar infestations. She told commissioners that MSUE can give people advice on how to mitigate them, but the agency does not spray for the moths or caterpillars.

“We do not provide spraying,” she said. “As an organization we are not involved in that kind of activity.”

Iosco County Clerk/Co-Administrator Nancy Huebel pointed out that if spraying for the moths was to be done it is already too late for this year, and the spraying should have been conducted in the spring.

Vice Chairman Jay O’Farrell said that he thought that the county made the right call on not conducting spraying, as far as the count went.

“We just had a small amount of dollars that remained in that account, we would have fell into a serious problem, as there are numerous townships that are affected, we are talking better than $100,000 for the county,” he said. “I think we did call it right, I think it might be a good idea to leave it up to the voters again.”

Huebel said she did not think the county could have gotten any spraying done anyway, as most county operations were shut down between March and June because of the ongoing Coronavirus pandemic.

Chairman Robert Huebel said that he liked hearing the input from MSUE and said the county had limited dollars to do operations as it is.

“We are trying to spend $1 and have it do what $5 does,” he said. “We just don’t have the money to do that. I would explore possibly as Commissioner O’Farrell was saying, possibly put it out so the voters and decide in November whether they would like to pursue something in this matter.”

Iosco County Treasurer Cathy Anderson told commissioners that if the millage were to be approved for the November ballot, and if it was approved by voters, then they could start collecting the millage from voters during the winter tax payments.

“We could put out the printing so we could get that millage on there so the money was on there for next spring, and collect that millage next winter, otherwise it would be another whole year,” she said.

Robert Huebel said that he was not on the board of commissioners when the original millage was passed in the 1990s. He asked commission Secretary/Co-Administrator Mindy Schirmer if she could get the language for review. She said she could get the old millage language and have it updated, and reviewed by the county’s legal council, for possible approval and for a possible vote for the November millage.

Huebel said he wanted that, adding that the county should take a look at a possible millage.