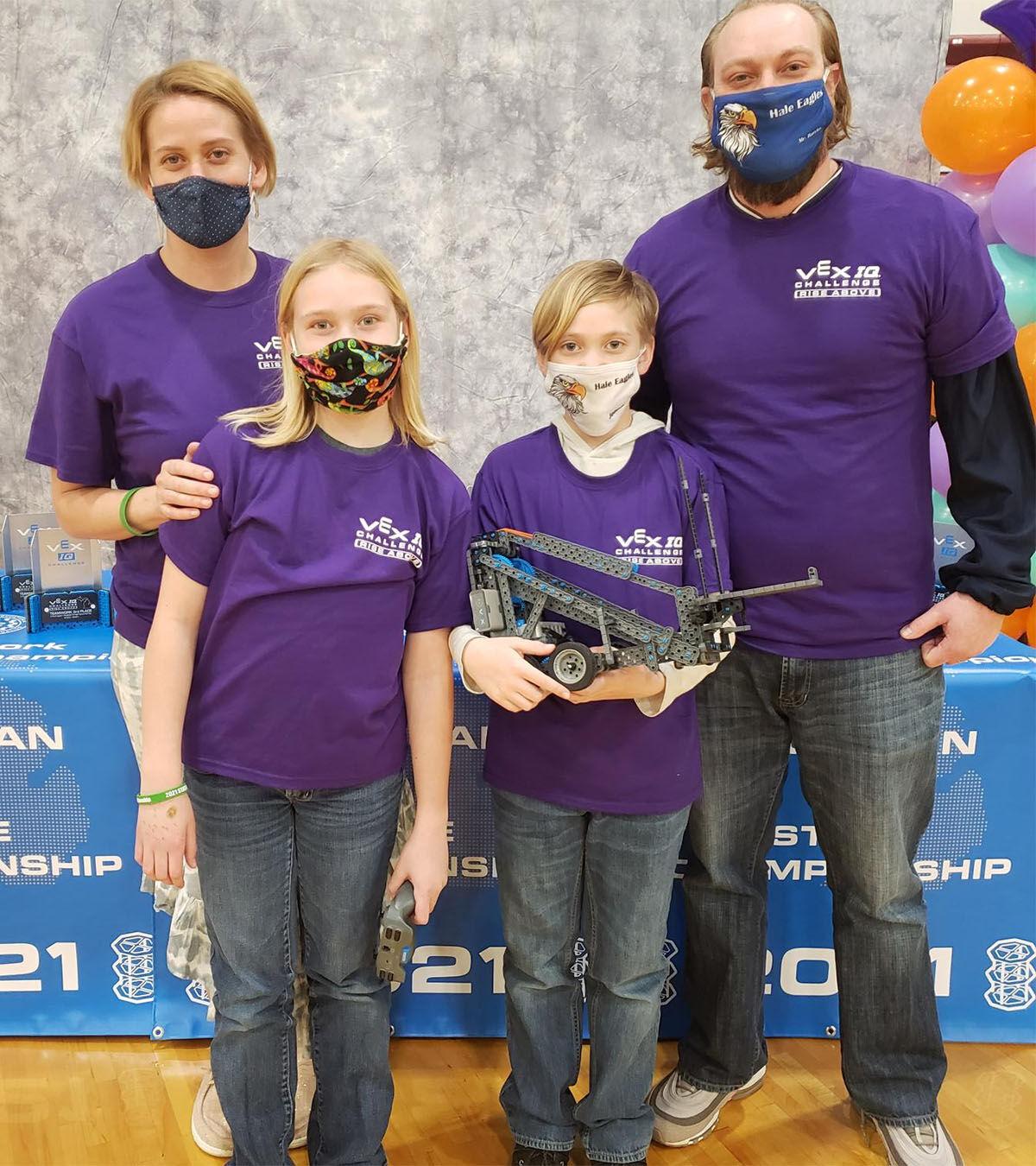 PROUD PARENTS – Front row, left to right, sister and bother Anella Barclay and Jonah Barclay pose with their robotics trophy, with their parents in the back row, Angela Barclay, left, and dad Jordan Barclay. Jordan is also the team’s coach. 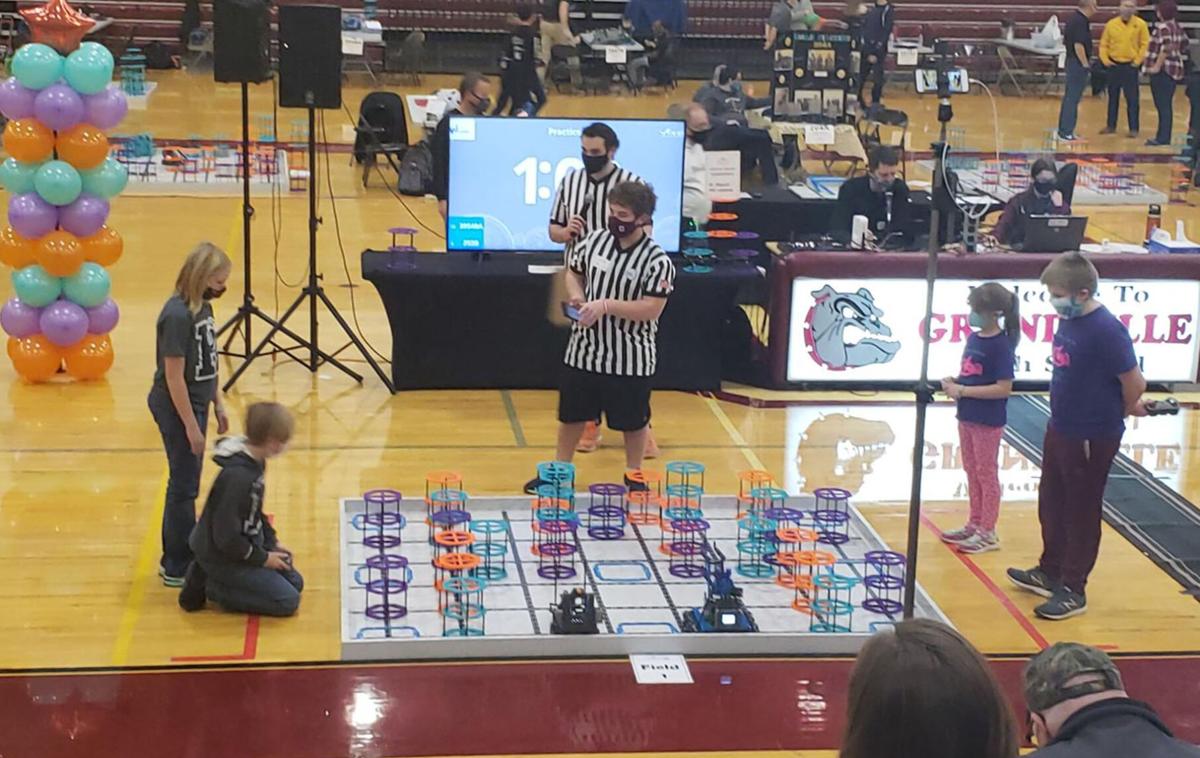 GRANDVILLE COMPETITION – The team of Jonah Barclay and his sister Anella Barclay, left side of the photo, participate in the Michigan State Robotics meet in Grandville, where htey recently took 4th place. 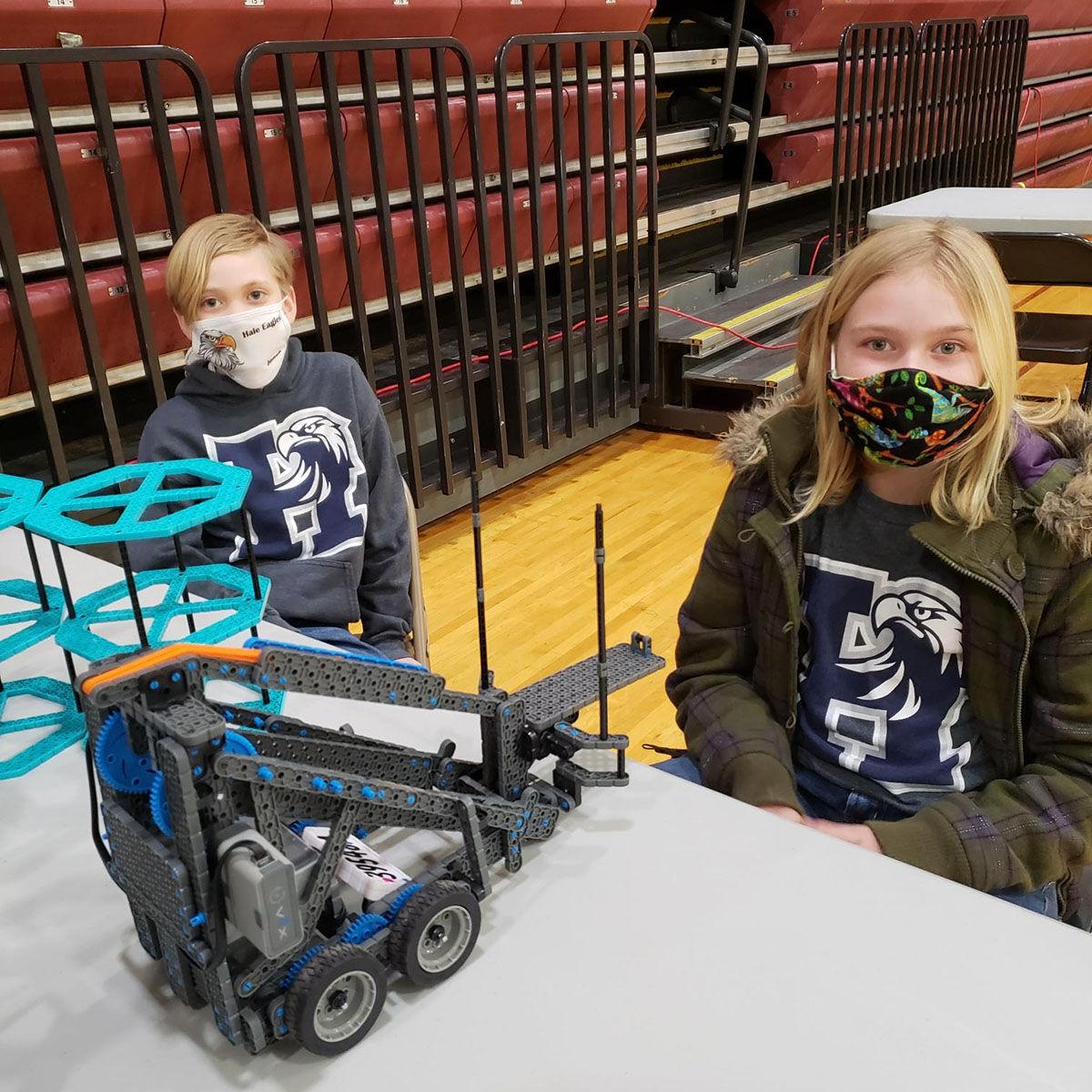 GRANDVILLE – Hale Area Schools student Jonah Barclay has been dying to build his own robot for the Hale Elementary/Middle School’s Robo Raptors team since Hale hosted their first live tournament two years ago when he was in first grade.

When he was approached this year to participate on the team by program director Joe Coleman in January, he jumped at the chance.  His fifth grade sister, Anella Barclay was dragged along somewhat reluctantly, but agreed to participate if she could drive the robot separately as her own “team”.

With the Hale hosted remote tournament only a few weeks away, the pressure was on to build and practice before Feb 6.  For a kid who can work for hours building incredible Lego builds, Jonah found the VEX IQ parts to snap together just as easily, and Anella would help construct the robot from time to time as well.

However, when the robot was built, they discovered that Anella was a very skillful driver, and Jonah used many of the math concepts he has learned in Mrs. Look’s third grade class to become an ace programmer.

The remote tournament was a great experience and the team performed well, but after a 7th place finish, it was assumed that the season was over. After an impromptu battle bot session, the robot was reduced to rubble.

Then in early March, the email came through. The team had qualified for the Michigan State Championship robotics meet in Grandville. More pressure ensued to rebuild the robot, along with some slight upgraded modifications based on what they had learned from the February meet.  There was one more catch.

Since the state tournament was a live event, there would not only be a skills portion like the earlier meet, but also a teamwork session where they would not only have to drive together as a team, but work with other teams from across the state. Being brother and sister, this proved difficult at times in many of their practice sessions, but soon enough the day of the meet arrived.

When they arrived at the Grandville High School athletic complex, their eyes were wide.  The massive football stadium, numerous trophy cases, and banners hanging in the gigantic gymnasium were a far cry from what they were used to at Hale.

Although nervous at first, they got down to work.  They completed their skills routines first, and after getting their best possible scores on the first run the pressure was off, for the moment. Then came the teamwork event. During the qualifying matches, they really began to come out of their shells.  They worked together well as a team for the first time!

They also worked together with some of the biggest names in robotics in the state, Notre Dame Prep Academy, Elevations Robotics from Lake Ann, and of course the hosts from Grandville. After eight qualifying runs, they were ranked as the 11th team out of 17, which paired them up with the 12th ranked team for the finals, The Three Amigos from Grandville’s South Elementary School.

In the finals match, the two teams combined to score 39 points, their highest point total of the day! Now it just a matter of waiting to see what the teams ranked above them would do.

During the awards ceremony, Anella and Jonah awaited the results with nervous anticipation. The awards for best build, creativity, ingenuity, and the skills competition were given out first. Then came time for the teamwork awards.

Fourth place was announced first and to their amazement, the team names for Hale Robo Raptors and The Three Amigos were called. onah jumped up and quickly made his way through the socially distanced crowd to the judging table to be first in line to receive the trophy.  Anella sat for a moment bewildered, and had to ask her coach to confirm that it was indeed her team name that had been called.

Eventually she ran down to the table to receive congratulations from the judges and get her picture with the rest of the teams.  All in all, it was an incredible experience for the siblings.

They learned some valuable lessons about teamwork and communication both with each other and with a diverse group of students. Fourth place in the state was a great accomplishment for a first year team, and they have been invited to participate in the World Championships to be held remotely in May.

A link to the recorded feed of the event can be viewed at:  https://www.youtube.com/watch?v=jiMcYp3t8ww