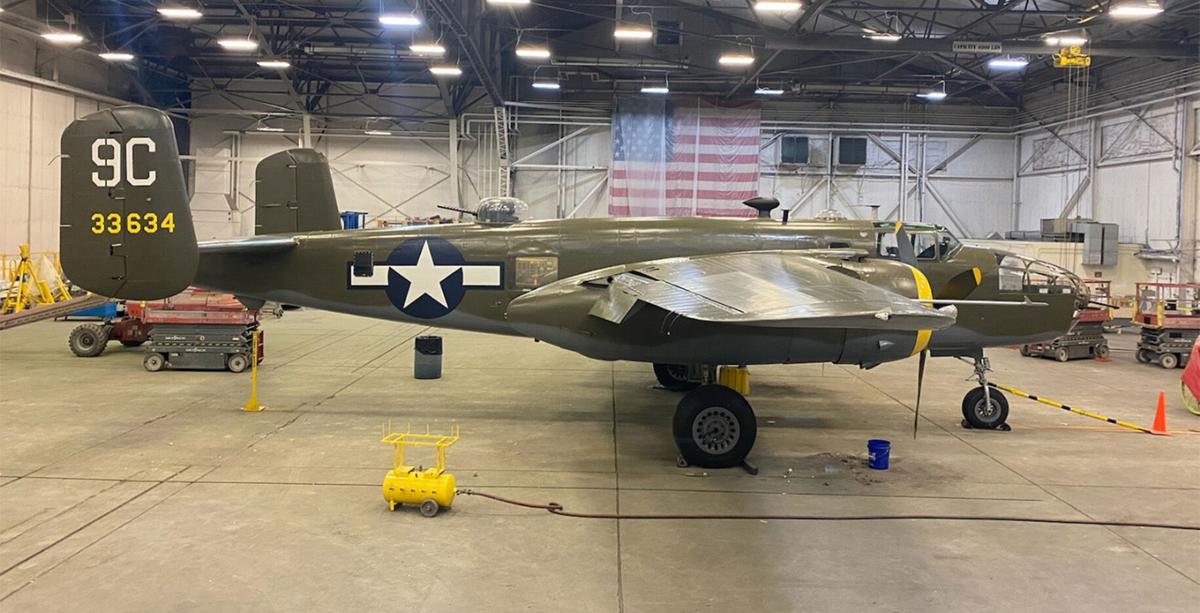 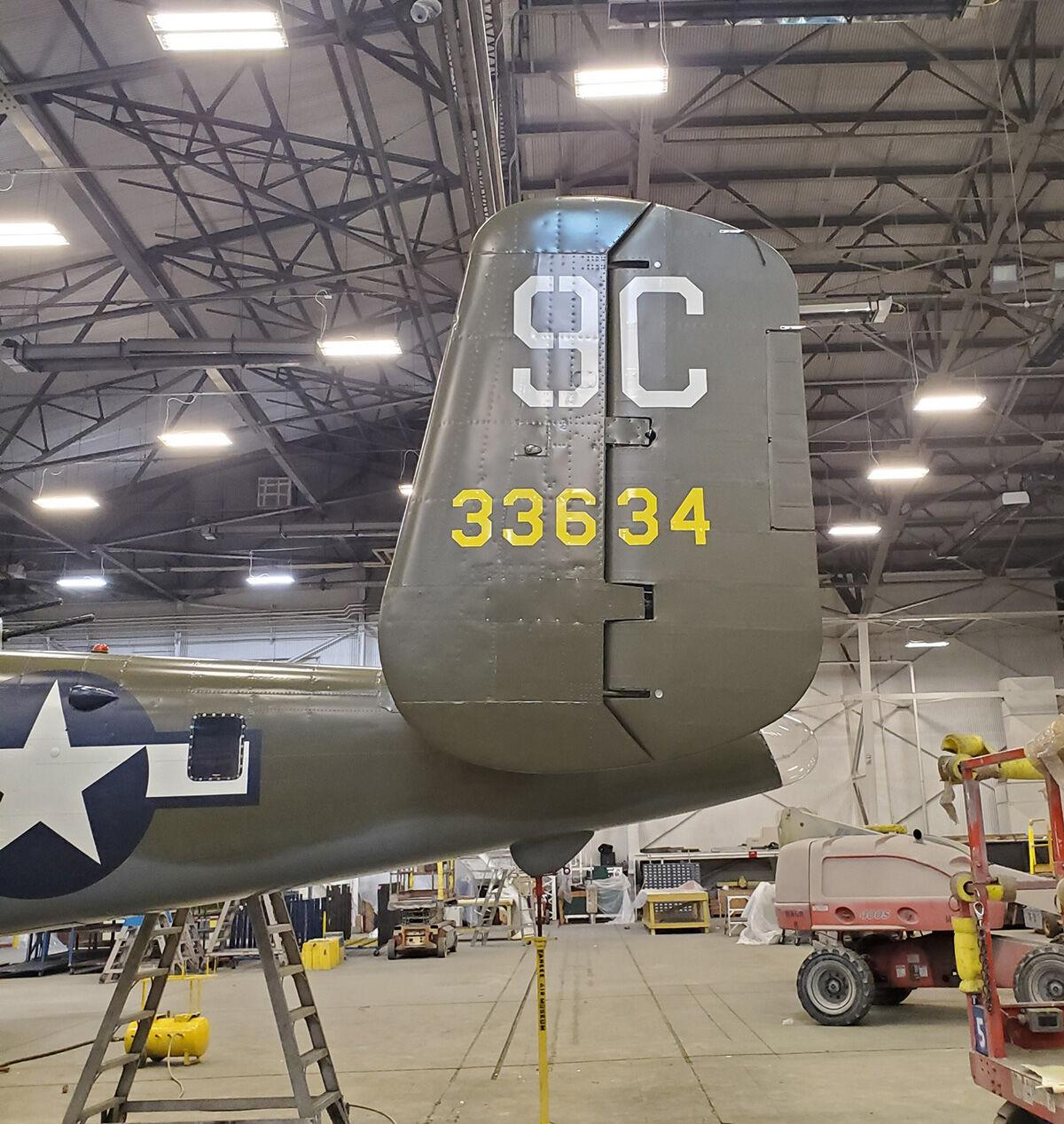 OSCODA — Yankee Air Museum’s B-25 Serial Number 33634 is fully repainted to the original colors it wore when it emerged from a North American Aviation assembly plant in Kansas City 77 years ago.  The plane now reflects its role in American in history as a combat veteran flying out of Corsica in the Mediterranean Theater of Operations.  The re-paint project, courtesy of Kalitta Air, is complete and beautiful.

“It looks fantastic,” said Kevin Walsh, President and CEO of Yankee Air Museum. “I am very anxious to see it outdoors, in natural light.  The Kalitta Air team has delivered a remarkable, authentic paint job.”

Walsh looked back to Dec. 28 when the Yankee Air Museum’s B-25 maintenance crew had been working on mechanical components of the plane throughout the day.  They reinstalled ailerons and other panels on the plane.  These parts were removed and painted separately during the project.  The elevators, which control the planes ascent and descent will be weighed and balanced at the Museum’s Willow Run base before being reinstalled.

“Just like in World War Two, the last official paint to go on the plane, are the ‘9C’ squadron identification markings on the tail, said Walsh.  “These were applied, and the paint job is complete.”

Walsh said that over the next couple of weeks the Museum’s mechanics will return with the balanced elevators, reinstall them and complete a series of mechanical inspections.  He said the plane will need to have engine runs and a test flight before it ferries home, to Willow Run.

“Our B-25 did not have any nose art, or a name when it was in the war,” said Walsh.  “We will name it and get an artist to paint period correct nose art later this year.”

Walsh said the B-25 will honor history, and fly to air shows this summer to educate people about the gallantry of our Greatest Generation.

“Yankee Air Museum salutes Conrad “Connie” Kalitta with great appreciation and thanks everyone at Kalitta Air for making this project possible,” concluded Walsh.

The B-25 repainting project could not have been accomplished without a crew of Museum volunteers who traveled to Oscoda, spent a few overnights, and took time away from their families this holiday season.  Like many non-profit organizations, Yankee Air Museum could not fulfill its mission without the time, skills and labor donated to it by volunteers.  With heartfelt appreciation, these B-25 project members are recognized:  Paul Hakala, Chief of Maintenance; Angel Estrada, B-25 Crew Chief; and volunteers:  Grant Schwartz, Darrel Bazman, Brian Gawronski, Rich Koski, Nick Consiglio, Tim Wedig, Eric Esckelson, Luke Noble, Bob Bailey, Joe Provost, Gene Wedekemper, Justin Walsh and Patrick Trevas.  The B-25 pilots for this mission, flying without heat in the cockpit:  Mike Vetter and Delane Buttacavoli.

Established in 1981 the Yankee Air Museum is a non-profit 501 (c) (3) organization.  The Yankee Air Museum dedicates itself to educating individuals through the history of American aeronautics, aerospace industry and its associated technologies while inspiring generations through personal experiences to instill pride in our national accomplishments. Yankee Air Museum, located at 47884 D Street, Belleville, Michigan on the grounds of historic Willow Run Airport. Visit  www.yankeeairmuseum.org to discover more or call 734-483-4030.

About Kalitta Air:  Kalitta Air is a Michigan Limited Liability Company owned solely by Conrad “Connie” Kalitta.   Mr. Kalitta is the renowned NHRA champion drag racer and team owner. He has a lifetime of experience in the airline industry dating back to 1967 when he piloted a twin engine Cessna 310 and began transporting parts for the automotive industry. In 2018, Mr. Kalitta received the prestigious Ronald N. Priddy NACA-CRAF Partners in Airlift Medal (“Priddy Medal”) presented by the National Air Carrier Association. In April 2019, Mr. Kalitta was enshrined into the Michigan Aviation Hall of Fame.