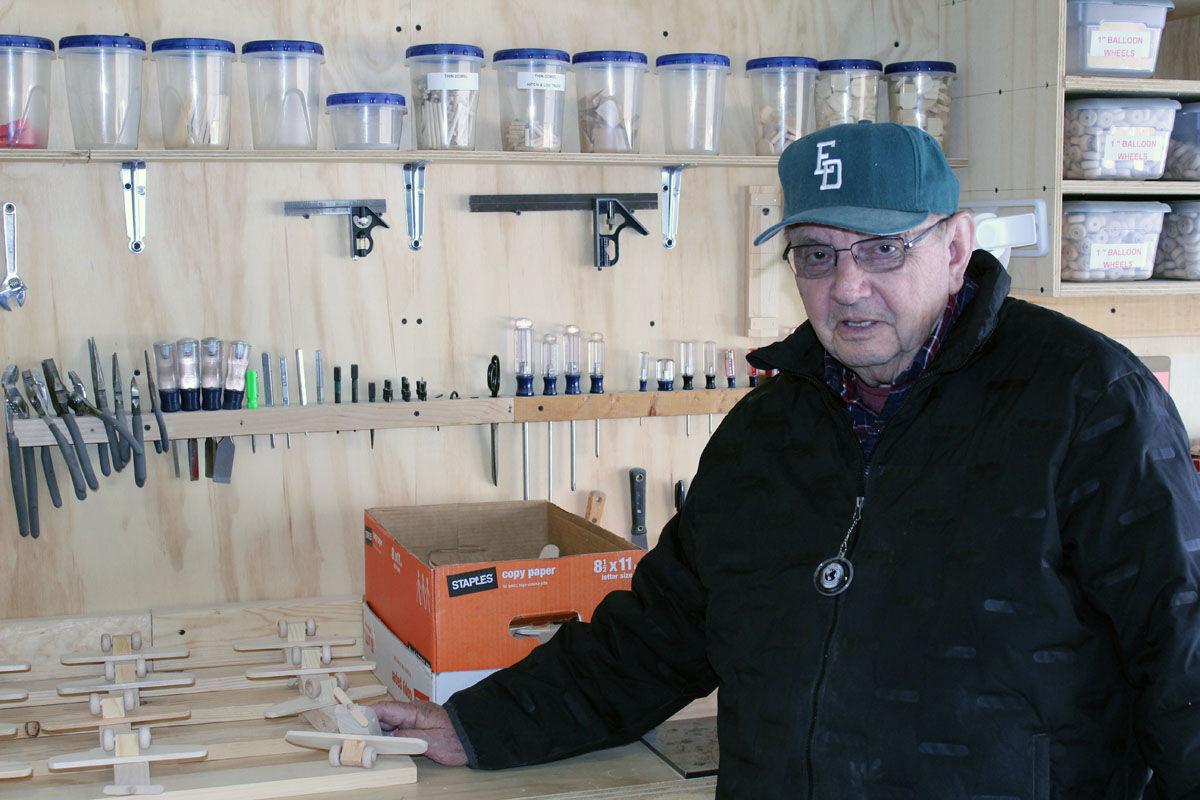 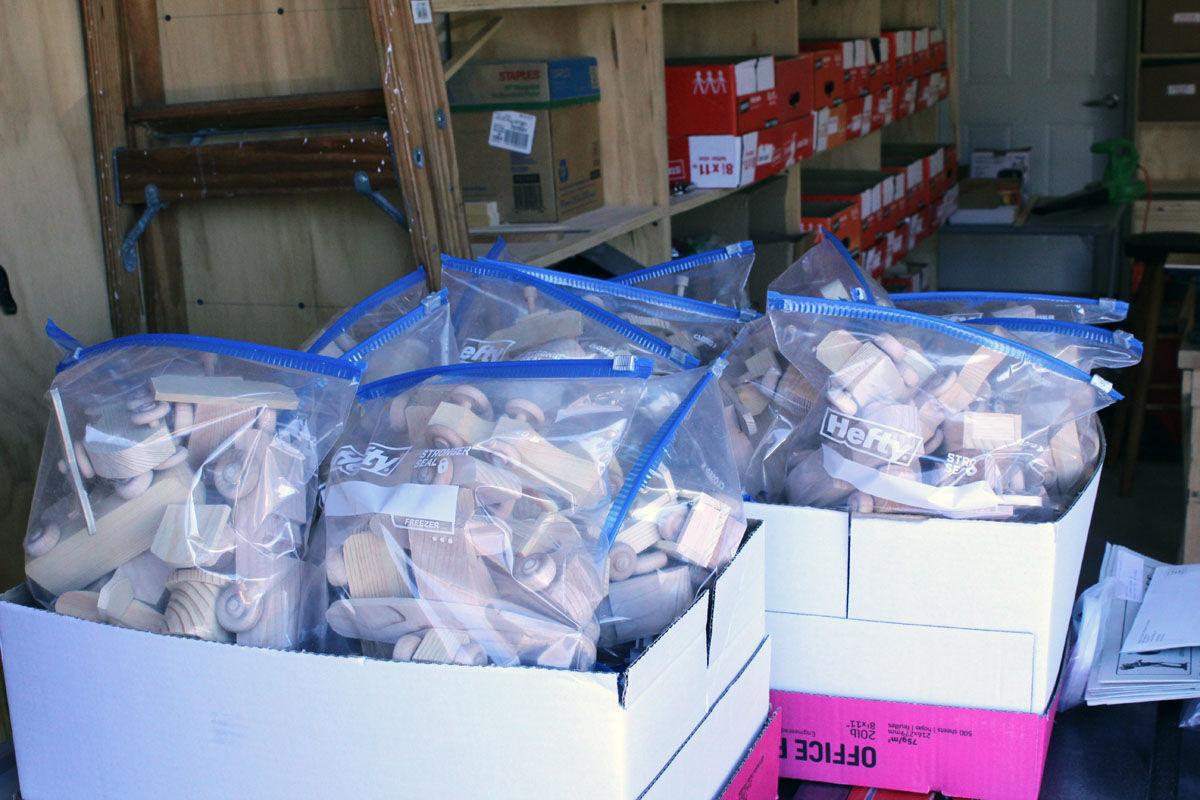 BAGS OF TOYS – Toy Maker Jerry Motz fills bags with six toys to give to local children. The bags include an airplane, helicopter, dump truck, racer, old car and bulldozer inside each of them.

TAWAS CITY – Walls lined with supplies such as screws, pieces of wood and glue fill the garage of Tawas City resident Jerry Motz – which he uses as his toy shop – where he makes hand-made wooden toys for local girls and boys in Iosco and Arenac counties.

At the start of the school year, Motz hand delivered hundreds of sacks of toys to children in AuGres, Oscoda, Tawas, Whittemore and Hale. Motz said, however, he hopes to get toys to children in Alcona County this year as well. According to Motz, children receive a sack of six wooden toys which include an airplane, helicopter, bulldozer, dump truck, racer and an old car.

Having recently moved back to northern Michigan almost two years ago, Motz decided that he wanted to give back to local children like he has been on and off for the last three decades. The journey to making wooden toys, however, began 27 years ago when Motz retired. He worked in East Detroit Public Schools at Kelly Middle School and East Detroit Middle School, now known as Eastpointe Middle School teaching mathematics and computers.

Shortly after he retired, he  took up the hobby of making wooden toys, a craft he learned from his father, who was a shop teacher. Early on he would make toys for his grandchildren who were quite young at the time. He said he would make them all kinds of different things from trucks to trains.

After the children grew up, however, Motz began selling his woodwork creations at craft shows along his wife, Sandra, who hand-crafted Barbie doll kits which included sleeping bags and a tent for two Barbies to sleep in. Although both of their careers were in Detroit, Motz said he spent a lot of time in northern Michigan during his summers while he was working as a teacher.

Almost a decade after retiring, around 2003, Motz and his wife decided to move to Lakeland, Fla.

“I didn’t start building toys until I retired, but I wasn’t building them on this scale either, but I learned later on that its easier to build 100 then to build 10, 20, because you’ve got your jigsaw you might as well use it, so I do.”

While he lived there he made toys for children and gave them to organizations like Salvation Army, the Children’s Home Society of Florida and local women’s shelters.

He said he lived there with Sandra for 15 years making toys, but recently decided to move back to northern Michigan, this time to Tawas City. Motz said when he first moved back he had plans to continue making toys, but he had trouble finding a place that would take them.

Quickly he found he was able to give them out across the county from handing them out at Big Boy to delivering them to elementary schools.

“It’s funny how things happen. I don’t ask for any money. They offer it. I don’t want any money, but then somebody will grab my check at Big Boy and pay it and I don’t even know their paying it,” said Motz.

He said he has been surprised by the locals acts of kindness towards him because he said he doesn’t care about the money. He said he’s just glad to help the kids.

He said also that he likes to give the toys to local police departments as well. He said he likes to give them to the department,so they can keep toys in their car for children if they are in an accident. He said the toy may be able to console them. Up to this point, Motz estimates he has created more than 75,000 toys and given them out.

After passing out the toys at the start of the school year, he continues working on them throughout the year to build up a stock for the coming year. Currently he is working on building 123 of each of the six toys mentioned.

With that many toys and that many parts, its easy to wonder how long it could take.

“It goes in stages. One day I’ll cut out blades for the airplane. The next day I’ll glue them together and the third day I’ll build the airplanes, but I can only do 40 at a time because that’s all the space I have,” said Motz.

He also said because everything is done in stages, each day has a different priority. He said some days he won’t build at all, but will focus on bagging and boxing up the toys to get ready to take them to their next destination.