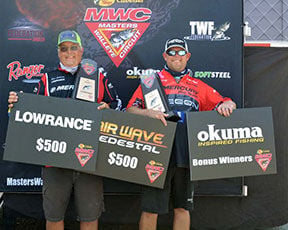 Dan Johnson and Larry Rhoads of Fayetteville, Ohio, and Milford, Ohio, hold up the winning trophies and prizes for taking first place at the Master’s Walleye Circuit on June 17 and 18. 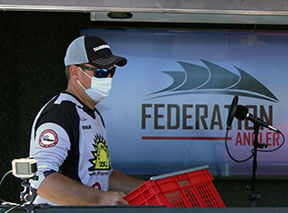 Oscoda resident Adam Hume brings his three fish up to weigh-in on the first day of the circuit, Friday, July 17 in AuSable. 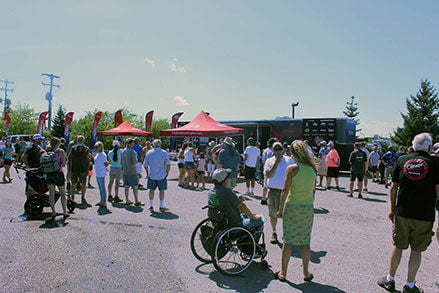 Locals and visitors gather at the AuSable Harbor of Refuge whilst social distancing and wearing masks to hear the daily weigh-ins from the anglers’ catches for the day on Friday, July 17. 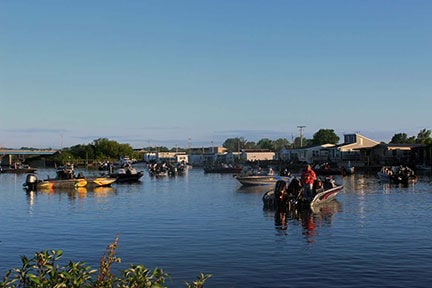 Anglers from across the nation gather at the AuSable Harbor of Refuge ready to take on the day on Friday, July 17.

AUSABLE TWP. – Angler’s from across the nation made their way to the AuSable Harbor of Refuge on Friday and Saturday for the annual Master’s Walleye Circuit.

The circuit which typically takes place on the Detroit River in April was canceled due to the threat of the Coronavirus. With that in mind, anglers’ were looking for a new location and they came up with Lake Huron as a suggestion.

The two day tournament kicked off at 7 a.m. with daily weigh-ins beginning at 3 p.m. The winners hailing from Fayetteville, Ohio and Milford, Ohio were Dan Johnson and Larry Rhoads in boat 29. The pair caught a total of 10 fish over the weekend weighing in at 35.11 pounds and receiving 150 points.

Second place was taken by the duo of Steve Vandemark of Linwood and Jerry Fox Jr of Harrison Twp. in boat nine with 10 fish weighing in at 34.04 pounds and receiving 149 points. The pair were awarded $3,700 cash and a $1,000 Ranger Cup bonus.

'You didn’t even give it a chance': Badgers seniors angered by Big Ten cancellation

Third and fourth place were swept up by out of towners. Kevin Dahl of Muskego, Wis., and Travis Pisarek of Chippewa Falls, Wis., who collected 10 fish weighing in at 30.08 pounds and collecting 148 points in boat 28. The duo collected $2,450 cash and a $2,000 option pot cash. Additionally, the duo of Rodger Riggs from Cleveland and Jason Kopf from Avon Lake, Ohio took fourth place with 10 fish weighing in at 29.10 lbs and collecting 147 points in boat 24. The pair walked away with $1,600 cash and $1,250 option pot cash.

Hailing from Tawas City and Grosse Ile were the duo of Matt La Freniere and Alan Szoke who took 31st place and caught two fish  with lost points due to one fish dying coming in at 9.08 pounds and 120 points collected.

A mix of clouds and sun with the chance of an isolated thunderstorm in the afternoon. Storms may contain strong gusty winds. High around 80F. Winds ESE at 5 to 10 mph. Chance of rain 30%.