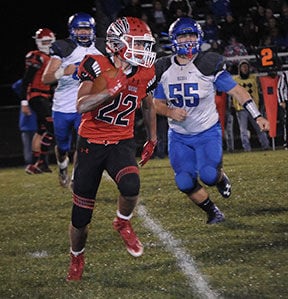 Tawas Area’s Logan Fiske hits the edge with room to run against Oscoda on Friday. 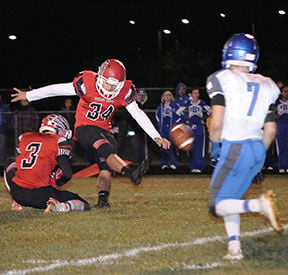 TAWAS CITY – For the better part of a half, it looked like the Tawas Area football team might be able to pull off the area’s biggest upset of the season in its home game with arch rival Oscoda. The Owls buckled down as the night wore on however, scoring 22 unanswered second half points to pull away for the 28-7 victory; securing the News-Press Trophy once again. The win gave Oscoda its third straight win over Tawas and also makes the Owls the first team in the area to punch their playoff ticket.

“I always say wins are big, but that was a big one,” Oscoda head coach Mark Whitley said. “Tawas is a good team and they were prepared for us and we didn’t have a good first half. We got our stuff together in the second half and played our style of football. It was a very good win against our rival.”

For the Braves, it was the second week in a row that saw them leading a favored team at the half, only to let the contest slip away in the final two quarters.

“Oscoda is a very talented team and coach Whitley is a good coach, in those situations we can’t afford to make critical errors,” Tawas head coach Tim Webb said. “Turnovers and untimely penalties really hurt us.”

The Braves took a surprising 7-6 lead at the half and hoped to add to that lead since they had possession of the ball to start the third quarter. Tawas broke its first play of the second half for a big gain, however in an attempt to gain extra yardage, the Tawas ball-carrier let the ball out of his hands, fumbling the ball away to the Owls on their own 45-yard line.

Seven plays later, Robert Host took a handoff to the right side of the field, seemingly hitting another gear as he neared the sideline and raced into the endzone, giving the Owls a 12-7 lead with 9:04 left in the third.

Tawas had back-to-back three-and-outs on its next two drives, and after a personal foul on its second punt attempt, set Oscoda up with the ball on the Braves’ 30-yard line.

Owen Franklin, who saw his most extensive time of the season as the Owl quarterback took the first snap of the ensuing drive up the middle of the line. Franklin worked his way through the line and burst through the Tawas secondary as well, on his way to the endzone. Host took the hand-off on the two-point conversion, giving the Owls a 20-7 lead with 10:38 to play in the contest.

The Braves attempted a wide-receiver reverse pass on their next drive but that was intercepted by Anthony Ward, giving the Owls the ball on the Tawas 44-yard line. The Owls couldn’t take advantage on that drive, fumbling it away on the third place of the series.

The Braves attempted a long fourth down attempt three plays later, but Gavin Lueck and Christian Ward teamed up for a sack, giving the Owls the ball back just 37 yards away from the endzone.

Oscoda finished off the contest’s scoring with 3:46 left to play, when quarterback Brayden Mallak dove for the endzone to cap off a three-yard score. Mallak tossed the two-point conversion to Franklin to bring the final to 28-7. This marks the Owls’ longest winning streak in the rivalry since winning five in a row from 1998-to-2001.

“I think this says a lot about the team, we knew when we went into the locker room that we had just played the worst half of football all year,” Whitley said. “The kids got together and said ‘we’re fine coach, we made mistakes but we are going to battle’ and that’s what they did. It’s a pretty gritty bunch.”

The first half it appeared that another story was going to be told, as it was the underdog Braves that stopped the Owls from scoring in the first quarter for the first time this season.

Driving for 6: Hitting the recruiting trail for 2022 updates, big summer plans and a personnel note

“(Assistant coach) Mark Cliff came up with a great defensive plan and our players executed it really well for most of the night,” Webb said. “I thought our defense played well enough to win.”

Midway through the second quarter, Tawas’ Camden Groff stepped in front of a Mallak pass, tip-toeing the side-line to haul in an interception.

Tawas started with the ball on their own 35-yard line, but couldn’t capitalize on the turnover, as it fumbled the ball away just one play later.

This gave the Owls the jump start they needed, using just two plays to score the night’s first points, on what was an Andy Dault scamper from 10 yards out with 5:43 to play in the half.

The Braves responded with their best drive of the night, as they went 65 yards in 13 plays for a go-ahead score. The drive was highlighted by key completions by Noah Davis. Davis tossed a pass to Justin Ulman on a third-and-11 and completed another pass to Groff for what set up a first-and-goal. On second-and-goal from the one, Lukas Herrick took a hand-off, bruising his way up the middle of the line and into the endzone.

Logan Gould followed by drilling an extra point to give Tawas its lone lead of the night at 7-6 with just seconds left to play in the half.

“Our guys didn’t come out scared, that’s for sure,” Webb said. “We continue to improve each week. We’ve done some really good things against some good teams. We just need to put together a complete game. I’m really happy with our effort and intensity, especially in the first half.”

Whitley wasn’t at all surprised in the fact that Tawas was making a game of it two quarters into the night.

“They’re a good team and they’re well coached,” he said. “The second half, we just came together and stopped making mistakes and started believing in the style of ball that we play. I was proud of our defense shutting them down in the second half and how our offense took over. We have been rolling haven’t had many mistakes; we needed a test and I think we stood up to the test.”

Anthony Ward had 6.5 tackles to go with his interception, with Dault and Mallak getting five tackles each.

“Mallak was dinged up a little bit from the week before but he put in a gutsy performance and Owen stepping in at quarterback was great, what a great job,” Whitley said. “Host had a good night with seven yards a carry and a touchdown and again we moved the ball around, with four different people scoring.”

Herrick led the Tawas offense with 107 yards and a touchdown on 15 carries, Logan Fiske ran seven times for 30 yards and Ulman had 22 yards on six carries. Davis was six-of-17 passing for 80 yards, completing three to Groff for 49 yards and Ulman for 31 yards. Eldon Humphrey had eight tackles and Groff had the interception to lead the defense.

“We needed to play well for four quarters, the mistakes we made are fixable so we’ll focus on that this week,” Webb said. “I was really proud of our players attitude and efforts.  I didn’t hear much negativity from the players, and that has been an issue at times this year.  They seem to be coming together more and that is great to see.”

Oscoda (6-0 overall) heads to Whittemore-Prescott (1-5) on Friday. The Cardinals are coming off a 42-6 loss to Breckenridge last week. Tawas (3-3) looks to keep its playoff hopes alive when it heads to Ogemaw Heights (4-2), a 36-6 winner over Cheboygan last week on Friday.