Dwayne Dopsie and the Zydeco Hellraisers was the 2021 Blues by the Bay headliner. 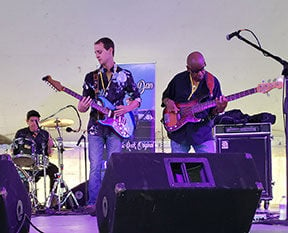 Downriver Dan stepped up to the plate as the opening act Friday to replace a last-minute cancellation by another band. The Blues Abiusers, a Tawas area band, started things off Sunday at the festival. They were one of the original bands that performed at the Tawas Blues by the Bay almost 20 years ago.

Lansing’s own “Queen of the Blues” Kathleen Walters and the Bridge Street Band warned up the Tawas stage at 2 p.m. Saturday. Mississippi Heat brought their Chicago-style blues to the festival on Friday night. 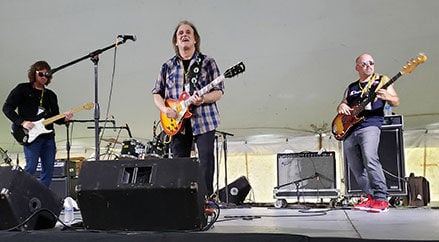 Rocky Athas was another last minute replacement due to a cancellation. The band brought punishing guitar riffs and catchy hooks to the stage.

The up-an-coming Western Michigan blues band with ties to the Tawas area Whiskey Bottle Blues started the blues off on Saturday. The Sax Maniacs closed out the 2021 Tawas Blues by the Bay festival on Sunday. 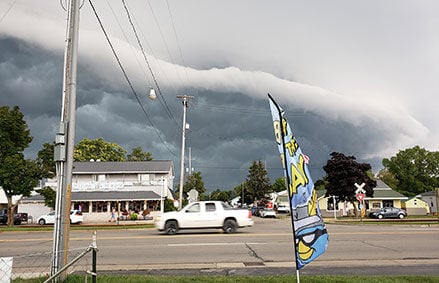 An ominous-looking shelf cloud blew into East Tawas just before 6 p.m. delaying the blues festival by about a half hour.

EAST TAWAS – Especially in its early years, rain and Blues by the Bay were synonymous.

One year, a severe thunderstorm knocked out electricity throughout East Tawas on a Saturday evening, a river of rain water rushed through the blues big top tent and generators were brought in  so that the show must go on.

After a year off due to COVID-19, rain and the blues got to know each other again this weekend. Attendees of the blues festival got a little taste of the rain early on Friday as showers fell during the morning, just prior to the noon start.

But the blues gods smiled down on the festival and the rain held off Friday until shortly after the last set was performed that evening. Michigan’s own Downriver Dan,  opened the 2021 Blues by the Bay as a last-minute replacement for Erich Goebel and the Flying Crowbars, who were forced to cancel the Tawas gig. Mississippi Heat was Friday’s headlining act, who brought their Chicago Blues to the festival’s stage. Then the rains fell again after the last performance on Friday

Whiskey Bottle Blues, an up-and-coming blues band from western Michigan with ties to the Tawas area got things rocking at noon on Saturday and was followed by Lansing’s own Kathleen & the Bridge Street Band.

Rocky Athas, “the Texas Tornado,” was another late replacement and the band brought its punishing guitar riffs and catchy hooks to the festival.

And then the rains game down prior to the 6 p.m. act, Eliza Neals.

And it rained, hard, in buckets, just following an ominous-looking shelter cloud blew into town. The rain only delayed the festival by about a half hour.

Detroit-born and Southfield-raised blues-rock star on the rise Eliza Neals easily could have been the festival’s headliner. Her operatically-trained voice has been called both sexy and menacing.

Neals sang Saturday with an unconditional passion to give the blues everything she has.

“My home is with the people,” she said in an interview prior to her performance.

Dwayne Dopsie and the Zydeco Hellraisers proved again they are worthy of the festival’s headlining   performers. The youngest of zydeco legion Rockin’ Dopsie’s eight children, the award-winning performer has developed his own high-energy style that rocked the Tawas crowd.

Sunday featured the Tawas area band, The Blues Abusers and finished with The Sax Maniacs.

The festival also offered attendees an opportunity to donate to worthy causes. For example, one table raised funds for the Killer Blues Headstone Project. The project exists to purchase headstones for blues artists lying in unmarked graves. The project has funded headstone for 137 blues artists. Each headstone costs about $800. During the last blues festival, enough was raised to purchase one headstone. This year, festival organizers are hoping to raise enough funds for two headstone.

Another table was set up to honor  “Big Ray” Haywood who for seven straight years performed as the festival’s last band on Sundays with his band, the Motor City  Kings. A crowd-favorite, Big Ray loved the Tawas blues festival and the feeling was mutual. Big Ray passed away unexpectedly on Feb. 24. A raffle was held for a photograph of Bay Ray at the Tawas blues festival and more than $1,000 was raised – the money will go to Haywood’s young son, Westin.

“We’re honored to be on this stage at this time,” said The Sax Maniacs front man. “This is Big Ray’s day and time on this stage” as the crowd lifted their drink ups in honor of Haywood.

Ken Murphy, president of the festival-sponsoring Tawas Bay Blues Society, said he is pleased with this year’s turnout.

“All-in-all, the crowds were down a little bit, but we expected it,” he said, especially with some COVID-19 fears still in the air.

And Murphy said he is very thankful of all the volunteers who helped out again this year.

“We appreciate all the volunteers,” he said. “Without our volunteers, we’d be in big trouble.”

The rain again held off on Sunday until the last act exited the stage.