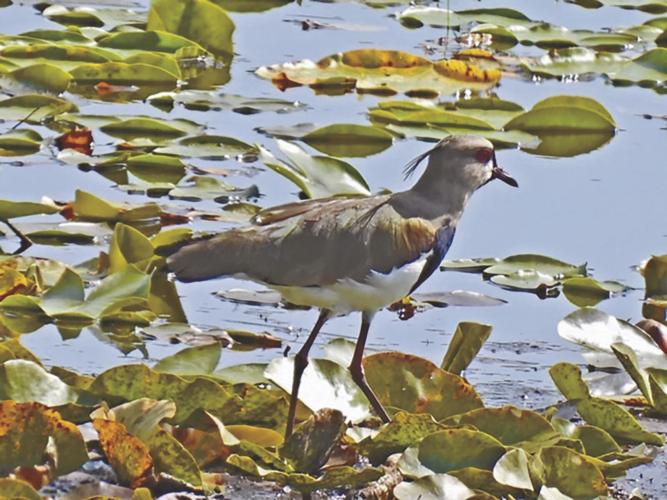 HABITAT – Areas, like this lily pad covered area of a lake, in this photo taken by Linda Filer, is very similar to what the southern lapwing enjoys in its home range in South America, according to birding expert Peggy Ridgway. 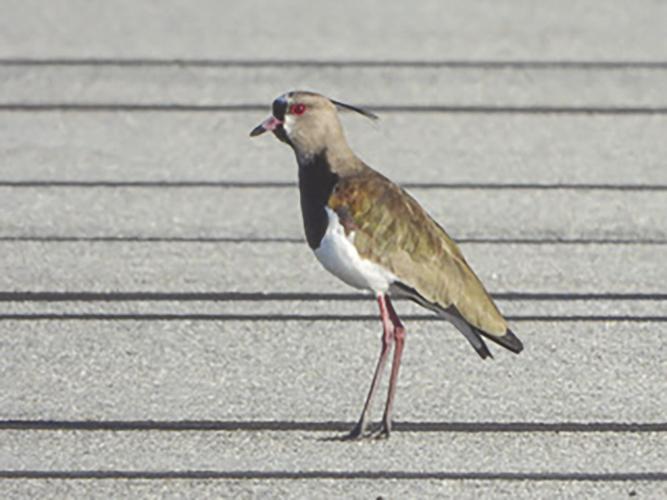 THE AIRPORT – The rare southern lapwing stands on the tarmac at the Oscoda-Wurtsmith Airport, nearly 5,600 miles from it’s home range in Uruguay. 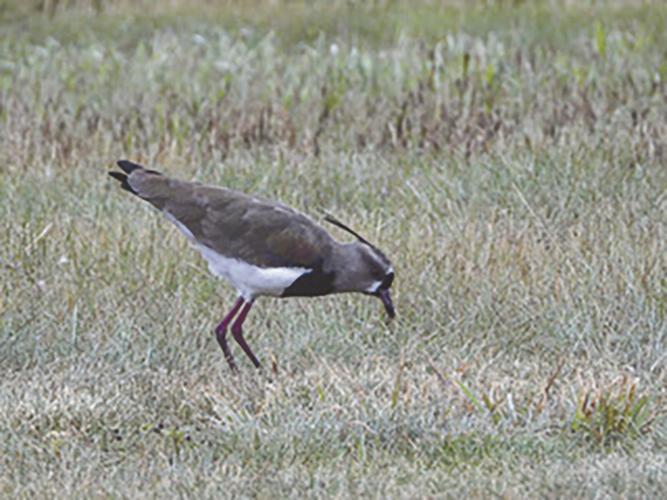 IN THE WEEDS — A rare southern lapwing looks for food in the weeds. 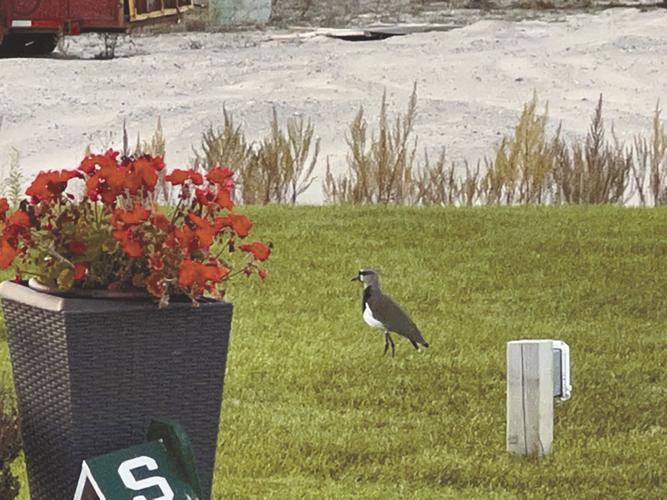 HABITAT – Areas, like this lily pad covered area of a lake, in this photo taken by Linda Filer, is very similar to what the southern lapwing enjoys in its home range in South America, according to birding expert Peggy Ridgway.

THE AIRPORT – The rare southern lapwing stands on the tarmac at the Oscoda-Wurtsmith Airport, nearly 5,600 miles from it’s home range in Uruguay.

IN THE WEEDS — A rare southern lapwing looks for food in the weeds.

OSCODA – It isn’t often that a South American bird lands itself in northern Michigan, let alone Oscoda! Yet, since late May of this year our town has been the residence of a lone southern lapwing, the national bird of Uruguay.

While it is very common and plentiful in that warmer region of the world, the bird is as rare as “hen’s teeth” in northern Michigan. In fact, it is so common in its home region, it’s the mascot of the Uruguay rugby team!

The southern lapwing is a little smaller than our American crow, and with longer legs for wading, and its low, rather rapid and raspy call, can be heard as it flies around from place to place. Its main source of food consists of insects, crustaceans and small fish. As a member of the plover family, it too nests on the open ground.

For the past five months our community has been on the rare bird alert list and has physically hosted hundreds of curious birders and citizens from all over the United States coming to check out the southern lapwing.

It is the first time ever this South American species has ever been observed in North America and with so much documentation! It remains a mystery of how this larger member of the plover family made its way here and why. Many have speculated a variety of possibilities of its means to get here. However, as of the second week of November, it was still observed daily near a residence on Cedar Lake and seemingly returns each evening to the grounds of the Oscoda-Wurtsmith Airport that Kalitta Air and our township now receive planes in and out on a daily basis. On Nov. 16 it was filmed also at Van Etten Lake.

Scientists May Be Closer to Effective HIV Vaccine

From co-ops to condos: Understanding the 6 types of residential properties

The bird appears very healthy and able to fend for itself. Yet, we all know that soon its variety of aquatic food sources on Cedar and Van Etten lakes will be iced over and then what? However, the cold biting temperatures the past week or so don’t seem to be slowing it down from its normal daily routine. But many birders speculate that as the nights (and days) dip into the teens, perhaps its body will not be able to adjust to the rather drastic thermometer plunges, plus sudden food shortages. Will it move on to warmer unfrozen waters? Does it have enough energy stored to venture south? Will it find enough food along the way to sustain the journey? Will it encounter any predators? So many unanswered questions when dealing with a species that probably never has coped with such fairly sudden seasonal change.

We birders have been asked by many concerned citizens, can’t you capture it and move it to safety? Some attempts were made to contact rescue facilities, but since the bird is not injured, they are unable or qualified to assist. Several zoos were asked about taking the lone wanderer.

However, the Avian Flu (Al) has forbidden these facilities to accept any waterfowl, for fear of spreading the virus.

The U.S. Fish and Wildlife also has its hands tied in attempts to rescue this avian because of similar restrictions. Consequently, the solution is not a simple one. So, it appears that we will have to hope for the best and trust that this fabulous feathered friend will use its avian ingenuity and journey to a warmer healthier more suitable environment before this frigid northern climate takes its toll on this unique visitor from another world!

Our 2022 guide to Black Friday Shopping Guide outlines all the hot sales and holiday deals available from our local retailers.

How to Cook a Turkey

Area students give their best tips and tricks in the kitchen this Thanksgiving and tell our readers "How to Cook a Turkey."