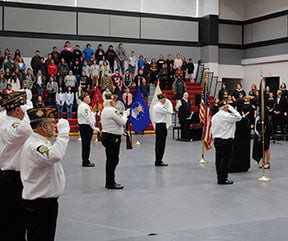 Last Thursday, Nov. 11, marked the 25th annual Veterans Day Assembly hosted by the students and staff of Tawas Area Schools. They paid tribute to all past and present service members, including the Tawas Area Veterans Honor Guard – who also participated in the ceremony and are seen here performing the Posting of the Colors. 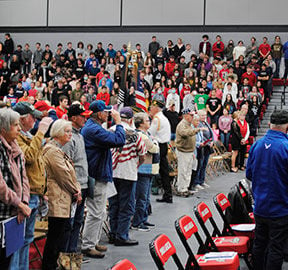 As the Tawas Area Veterans Honor Guard completed the Retiring of the Colors, the huge crowd of supporters gave a boisterous round of applause, cheers and a well-deserved standing ovation for all of the veteran attendees. 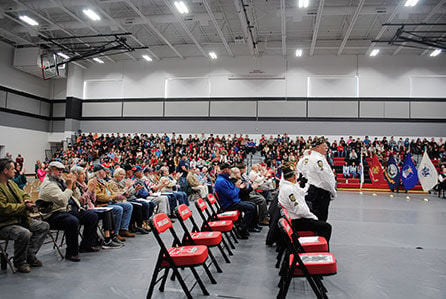 Among the songs played by the Tawas Area High School Concert Band, during the district’s 25th annual Veterans Day Assembly, was the “Salute to America’s Finest” medley. Featuring the service songs of the U.S. Army, Navy, Coast Guard, Marine Corps and Air Force, veterans in the crowd were asked to stand and be recognized, as shown here, when they heard the song of the military branch in which they serve(d).

Among those addressing the crowd at the Tawas Area Schools (TAS) Veterans Day Assembly, is senior Grace Look, who provided the welcome and introduction, along with leading the crowd in reciting “The Pledge of Allegiance.”

Among those addressing the crowd at the Tawas Area Schools (TAS) Veterans Day Assembly, were TAS junior Evan Mochty. Mochty shared some history in recognition of the Tomb of the Unknown Soldier 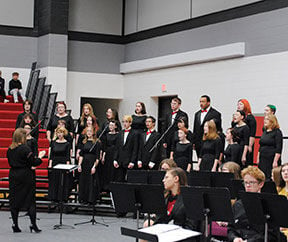 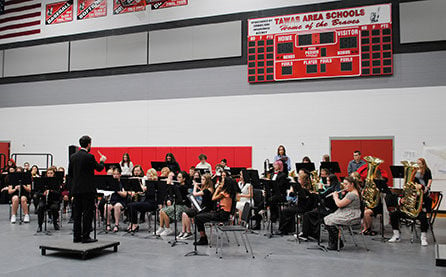 Members of the Tawas Area High School Concert Band performed an assortment of patriotic numbers at the school on Nov. 11, in honor of Veterans Day.

TAWAS CITY – Although we can never fully repay our nation’s military personnel for their bravery and sacrifices, we can find ways to express our gratitude to the men and women in uniform who have served our country.

An exemplary instance of this was demonstrated by those from Tawas Area Schools (TAS), who carried out their 25th annual Veterans Day Assembly on Nov. 11.

Held in the gymnasium of the high school building, a touching tribute was paid to U.S. Armed Forces representatives both past and present, and near and far.

For the local individuals who were acknowledged, this included the Tawas Area Veterans Honor Guard, who also participated in the assembly by carrying out the traditional Posting of the Colors at the start of the event.

When they later performed the Retiring of the Colors, it made for one significant, standout portion of the assembly. The large crowd that attended gave a spirited round of applause, which developed into a swell of cheers, culminating in a standing ovation that went on for several moments.

A similar display of the audience’s appreciation for the Honor Guard and other veteran attendees was also witnessed at the end of the assembly, when the crowd rose to its feet and gave another enthusiastic round of applause.

Prior to the actual start of the event, all veterans were welcome to arrive early for an hour of conversation, coffee and donuts. Following this, a section of seating was dedicated solely to them, front and center in the gymnasium, to view the assembly.

“It is your service and sacrifice that has, and continues, to keep our country safe and free,” said TAS senior class member Grace Look, who kicked off the event and was one of several student speakers to address the crowd.

She recognized all among them who are part of the U.S. Military – veterans, active duty service members, Guardsmen and Reservists – adding, “Thank you to those who have served and those who continue to serve today.”

Once the Posting of the Colors was complete, the Tawas Area High School Concert Band played “The Star-Spangled Banner,” and then all in attendance recited “The Pledge of Allegiance.”

From here, TAS senior David Stang provided some history on Veterans Day, noting that this occurs on Nov. 11 every year, in honor of the 11th hour of the 11th day of the 11th month in 1918 which signaled the end of World War I. Known as Armistice Day, this special date was first observed one year later, on Nov. 11, 1919.

A Congressional resolution passed in 1926 called for an annual observance and, in 1938, Nov. 11 became a national holiday.

President Dwight D. Eisenhower officially changed the name of the holiday from Armistice Day to Veterans Day, in 1954, Stang continued. In 1968, the Uniform Holidays Bill was passed by Congress, which moved the celebration of Veterans Day to the fourth Monday in October. Although the law went into effect in 1971, it was in 1975 when President Gerald Ford returned Veterans Day to Nov. 11, given the important historical significance of that date.

Stang noted that Veterans Day is a time to acknowledge all American veterans, living or dead, and to especially give thanks to the living veterans who served their country honorably during war or peace time.

In one such gesture of appreciation, the Tawas Area High School Choir then performed a rendition of “Song for the Unsung Hero.”

Hear what Dr. Fauci thinks about vaccine boosters for kids

With the theme for Veterans Day 2021 being “Honoring All Who Served,” TAS sophomore Addysen Otremba recited the associated reading for this. “All veterans make a sacrifice to serve their country, whether physically, emotionally or by being away from their loved ones and missing important life moments,” she said.

“Looking back on centuries of veterans’ service and sacrifice and what we have learned from the past, we must always maintain the vision for the future of veterans,” she went on. “Putting the veteran at the center on Veterans Day, we continue to honor all who served, while focusing on the needs of the next generation of veterans.”

When junior class member Evan Mochty spoke, he pointed out that 2021 also marks the centennial commemoration of one of the nation’s most important shrines – The Tomb of the Unknown Soldier in Arlington National Cemetery, which is dedicated to the service members whose remains have not been identified.

Among the historical information he provided, he said that the Tomb has served as a site of mourning for 100 years – since an unknown World War I soldier was laid to rest there in 1921 – as well as a place of commemoration which inspires reflection on service, valor and sacrifice.

The other student speakers were sophomore Sherman Hayes, who shared some facts about today’s veteran population in the country, and senior Abigail Herbolsheimer, who recited notable messages from dignitaries about the importance of Veterans Day.

For example, “The nation owes a great debt to its veterans, whose service to the nation spans every decade, every year, every day of our country’s existence,” she said in part, when quoting the late General Colin Powell. “Whenever and wherever the nation has called, in times of darkness and danger, as well as in times of peace and prosperity, America’s veterans have been there.”

TAS band and choir members then continued their tribute, with the choir singing a medley of “The Star-Spangled Banner,” “America, the Beautiful,” “America (My Country ‘Tis of Thee)” and “The Battle Hymn of the Republic.”

A few of these songs were also performed by the band, during their assorted arrangement, “A Patriotic Festival.” Another medley they shared was, “Salute to America’s Finest,” which showcases the official service songs of the U.S. Army, Navy, Coast Guard, Marine Corps and Air Force.

As each song played, the veterans were asked to stand for their respective branch of the military in which they serve(d), so that they could be recognized.

Another song that, at the very least consistently brings a lump to the throat, if not tears to the eyes, is “Taps.” In memory of those who gave their all, the familiar, solemn tune is one which has an impact on everybody, even those who may not personally know a veteran.

The audience stood for the playing of “Taps,” which was performed by band members Claudia Hunt and Colleen Kubisiak.

“It is our honor to be able to serve you today, to show our appreciation for all the sacrifices and the time that you have put in for us. We are so very appreciative of that,” she began.

Along with thanking the veteran attendees, the community members who showed up in support and the participants from the Tawas Area Veterans Honor Guard, Gronda also credited the numerous individuals from TAS who made the event possible.

As for the latter, Gronda said they shared some very important information, which she hopes that a lot of the students will take away and carry with them always.

To the veterans, Gronda said it is a goal at TAS to honor and serve them, today and every day, and show thanks for all of their service to the American people. “We stand and applaud you.”