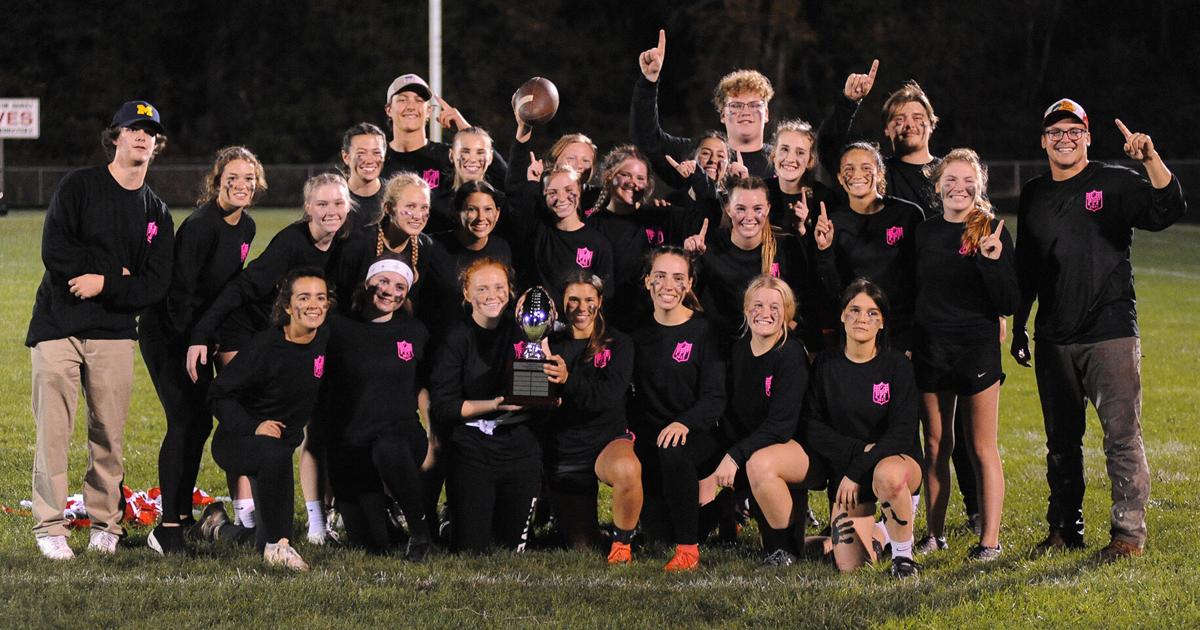 POSE WITH TROPHY – The Tawas Area seniors pose with the trophy after defeating the juniors in the annual Powder Puff football game 7-6, thanks to a touchdown in the final minutes. 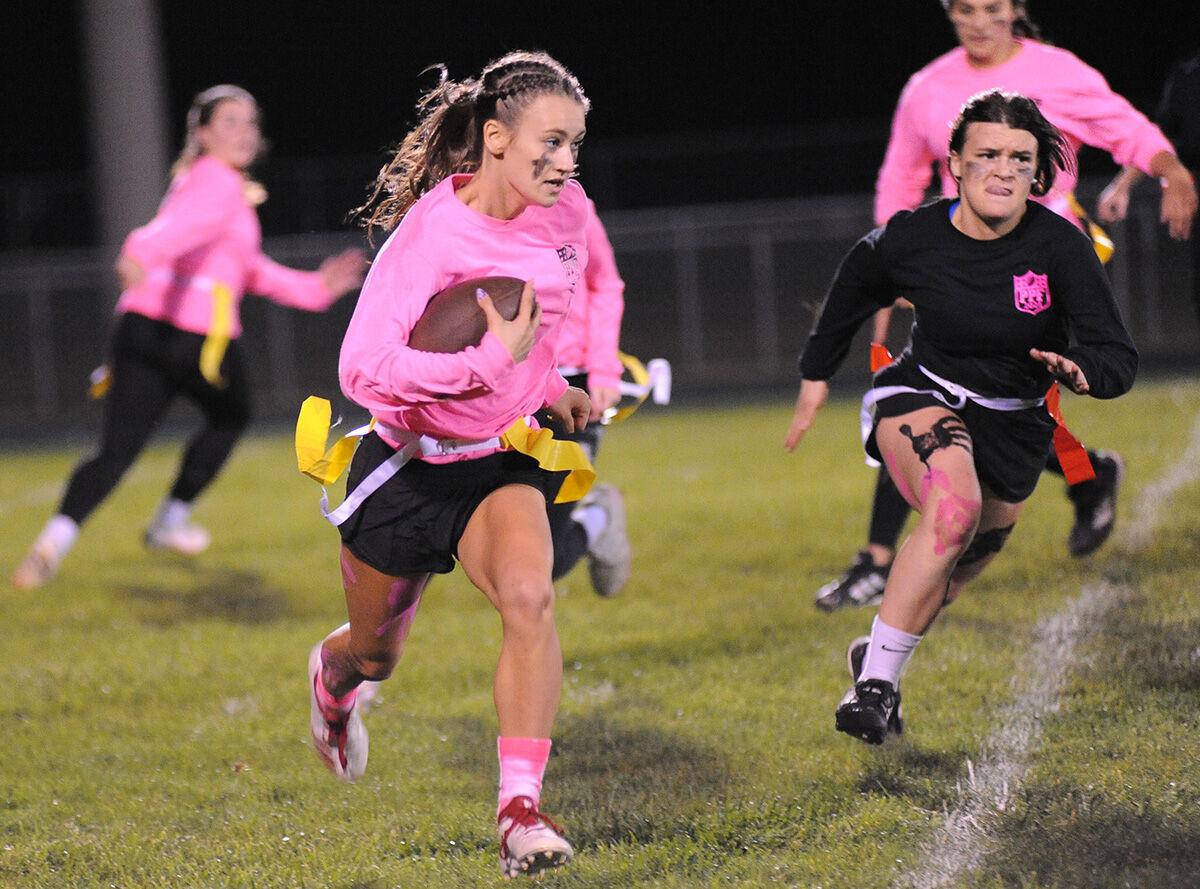 TAWAS CITY – For awhile, it looked like the juniors might spoil the night for the seniors in Tawas Area’s annual Powder Puff football game on Monday, Oct. 4. A touchdown with 5:43 to play and an interception to ice the game by Grace Look helped the seniors to prevail, however, allowing them to celebrate their hard-earned 7-6 victory with a trophy presented by assistant principal and event organizer Stacey Mochty.

“We came together as a team, as seniors and we came back and I’m just so proud of everything that we could do,” Look, who is also a member of Tawas’ varsity football team said. “I’m so happy we were able to come back together; that was not a one-person win, that was an 11-man win.”

The contest featured Tawas Area’s female student athletes competing in an 11-on-11 flag football game, while varsity football players acted as the coaching staff for their respective classes. It had the feel of a Friday night varsity football game; complete with concession stands, a packed crowd, cheerleaders and P.A. announcer Tim Haskin lending his voice.

The juniors ran what appeared to be a variation of the veer offense, while the seniors opted for a full-house style attack. Though both sides executed their offenses quite well, it was a night that was mostly dominated by the two team’s defenses. In fact, it was nearly a defensive play that won it for the juniors.

With the seniors driving deep into their territory late in the third quarter, junior defensive back Reese Cadorette stepped in front of a wide receiver for an interception. She ran towards the right sideline where she found plenty of room to run, showing off sprinter like speed as she raced down the field for the first points of the night. The seniors held strong on the ensuing one-point conversion, however, ripping the flag to down the ball-carrier for what turned out to be a crucial stop, leaving the score 6-0.

The seniors turned the ball over on downs on their next drive, but early in the fourth, the juniors coughed up the ball into the hands of the seniors. On a botched pitch-play that saw the ball hit the turf in the backfield, Lily Taylor won the ensuing scramble, diving on it, setting up the seniors just 13-yards from the end zone.

Look, the granddaughter of Tawas’ all-time winningest varsity football coach Dick Look, narrowly converted on a fourth-and-five from the seven-yard line on a quarterback-keeper, reaching just inside the two.

On first-and-goal Abby Herbolsheimer hit the right edge, where she found the corner for what was the only offensive touchdown of the night. Look ran a bootleg to the right corner for the ensuing one-point conversion to give the seniors their winning score.

The juniors attempted a potential game-winning drive of their own in the final minutes, but Look, who broke up a pass play on third down, intercepted a fourth down pass in the middle of the field with just over three minutes to go, allowing the seniors to run out the clock on their victory.

“We were really excited to be able to play,” Look said. “I know last year, it was close to being cancelled but we brought it back in the spring. I think we are really excited that it came back into the football season and as a kickoff to our homecoming week.”

The seniors began the game with the ball, and while they moved down field thanks to positive running plays by Herbolsheimer and Look, as well as a short pass from Look to Brooke Chrivia, the drive came to a halt on a turnover, when junior player Erin Brown jumped on a fumble.

The juniors also had a first half interception hauled in by Kabela Hewitt, but both teams were mostly unable to move the ball with sure-handed defenders regularly ripping the flags from offensive players.

The juniors had their best drive early in the third quarter, and though a nice six-yard run by Madison Buresh gave them a first down near midfield, they eventually turned the ball over on downs. Though, this only set up Cadorette’s defensive touchdown a few plays later.

For the seniors, Look finished with 14 carries for 55 yards and she was also three-of-six passing for 23 yards and two interceptions. Herbolsheimer had 13 carries for 54 yards and a touchdown and Olivia Morand added 14 yards on the ground.

Taelyn Eberline had a 15-yard reception, Brooke Chrivia had a five-yarder and Marleigh Moeller caught a two-yard pass.

The juniors had Cadorette finish with 30 yards on eight carries and Buresh finished with six yards.

“It was such an exciting game,” Mochty, who thanked the many volunteers that helped make the event happen said. “The seniors may have been victorious over the juniors, but it was close. It could’ve been either team’s win. The players had only practiced for about three weeks; being led by classmate football players as their coaches, but they showed skill, speed and strength.

“I’ve already heard the current junior class talking about game strategies for next year. It’s awesome to hear their analysis and excitement about the game. It was also a well-attended event, and I am certain that the high fan volume this year was due to last year’s COVID restrictions imposed upon athletics and other large events such as Powder Puff Football. I know people enjoyed a beautiful evening for a normal school event. It was refreshing.”