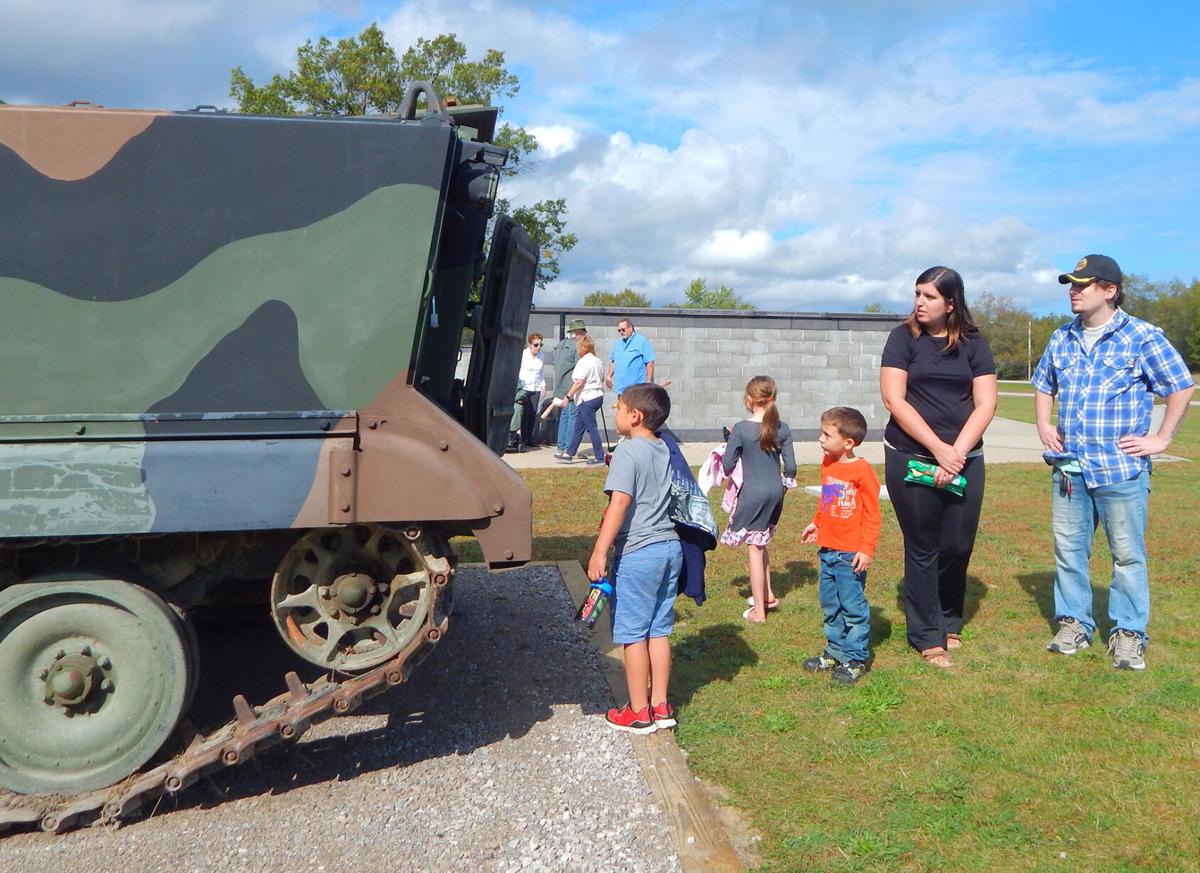 PEERING IN – A family takes a look inside the M113-A1 as the hatch was opened up for public viewing. 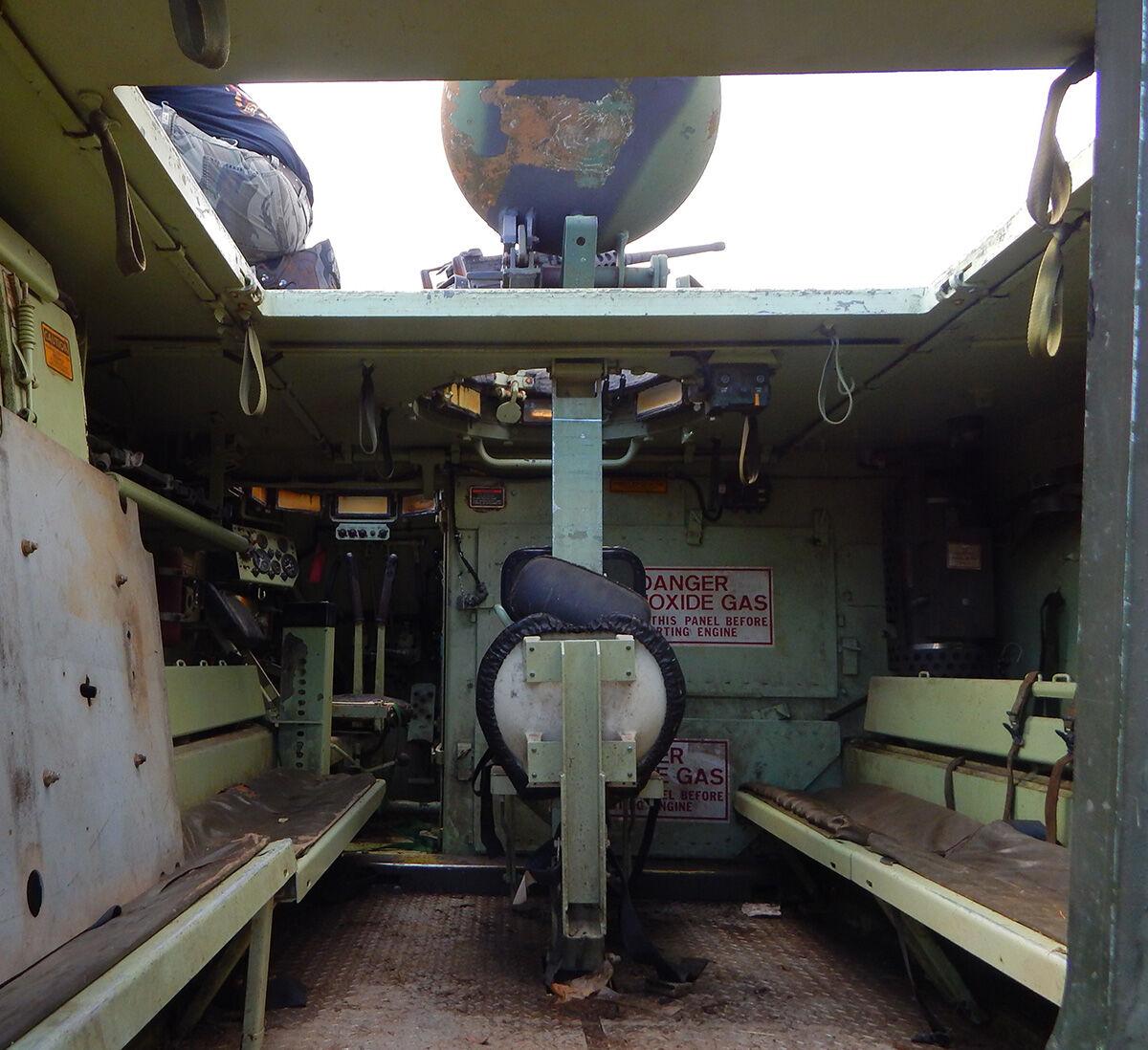 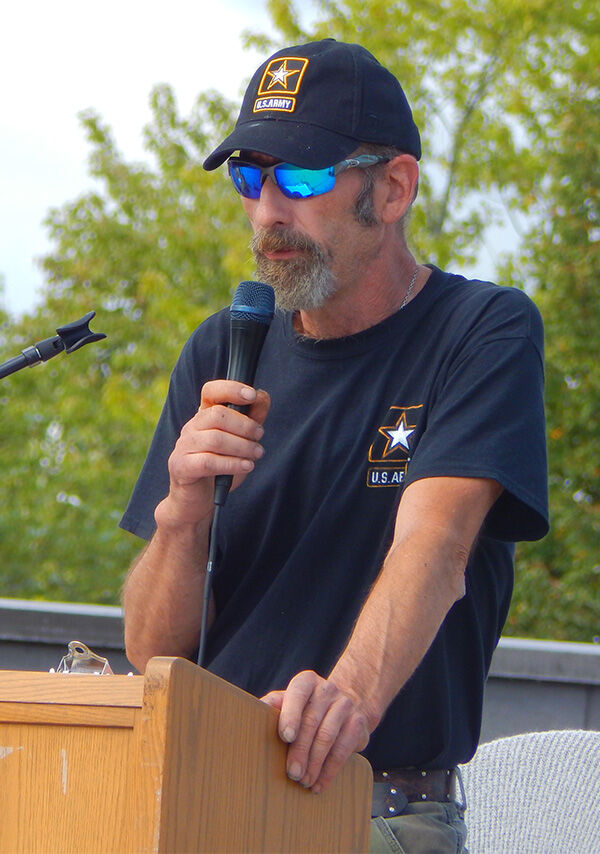 SPEAKING HIS PEACE – Fred Pickering addresses the crowd as he goes over the specifications of the static displays at the VMP. His wrecker is on loan to the park until this spring. 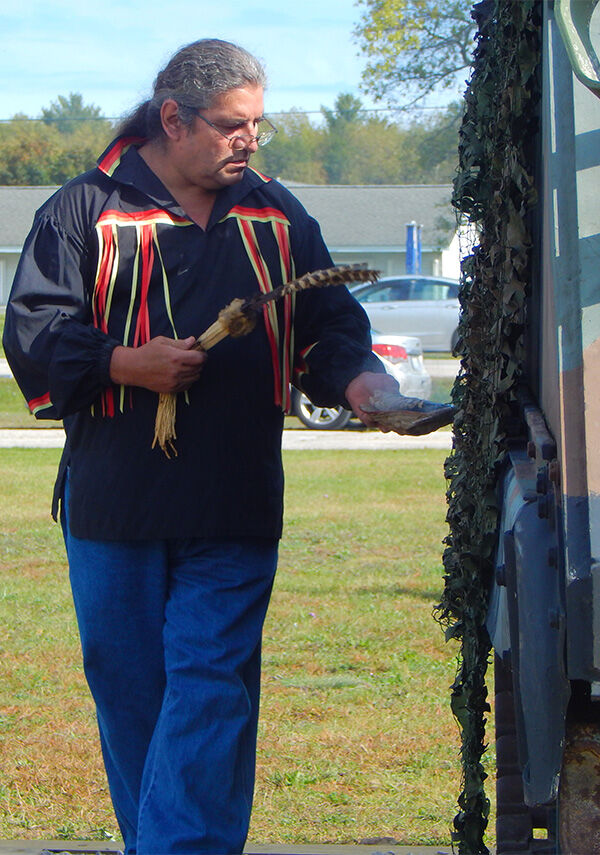 A BLESSING – “Nimke” Joe Ireland of the Chippewa Nation of the Great Lakes smudges sage. He went around the Memorial blessing everyone. He also handed out tobacco for people to pinch and say a prayer with.

Members of Oscoda’s VMP and the public attended the official public unveiling of their static display of military equipment during an event held Saturday.

These metal vehicles were used every day in combat over various theaters of war. Many veterans from various wars showed up to take part in the event.

Many of them even rode in or operated these same types of vehicles during their service.

The ceremony kicked off with the color guard presenting the flag followed by the National Anthem. Then there was a blessing of the crowd by “Nimke” Joe Ireland and a patriotic performance by Danny Althouse. Members of the VMP spoke on the items on static display over the park.

Retired United States (US) Army Veteran Joe Brinn discussed the process of acquiring the equipment and shared his gratitude over having the opportunity to display these pieces of military equipment.

“What we’re doing with this park is trying to make it something unique,” he said. “With these static displays, it has turned the corner for us.”

Weighing at a whopping 26,000 lbs., the M113-A1 was a heavy-duty armored personnel carrier first utilized in 1964. It carried troops to and from the battlefield. Many veterans at the park, like Brinn were in these same model vehicles during their tours of duty.

The M114 is a smaller, lighter more maneuverable version of the M113-A1

In honor of the unveiling, the M113 was opened up for visitors to look inside. Most of it was intact and all hatches up top functioned well.

The wrecker is on loan from Fred Pickering, and is there through the spring.

The VMP are in the process of raising the money to buy a “deuce and a half,” also known as a two and-a-half ton six-by-six cargo truck.

Except for the wrecker, the equipment came from a charity museum based in Crown Point, Ind.

The tracked vehicles were driven up by Ken Knick from 6 Logistics Trucking Company.

Static displays also included mock guns mounted on top to show where the drivers would shoot from.

Park volunteer organizer Bob Tasior said the Howitzer had to be cut in half to fit under overpasses on the road before it could be carried.

Tasior says its their organization’s dedication and professionalism that convinced the Department of Defense to grant them extra static display items beyond the normal limit.

“They said they liked what we were doing down here, so they allowed us to have more than one,” he said.

Tasior said he hopes the displays will attract more visitors to the memorial. Tasior says has plans to hold “Rockfest” at the VMP this upcoming year, and that the static display items are going to be part of the festivities for that event.

“People can walk through the memorial as they attend the event and be able to be near these vehicles,” he said.