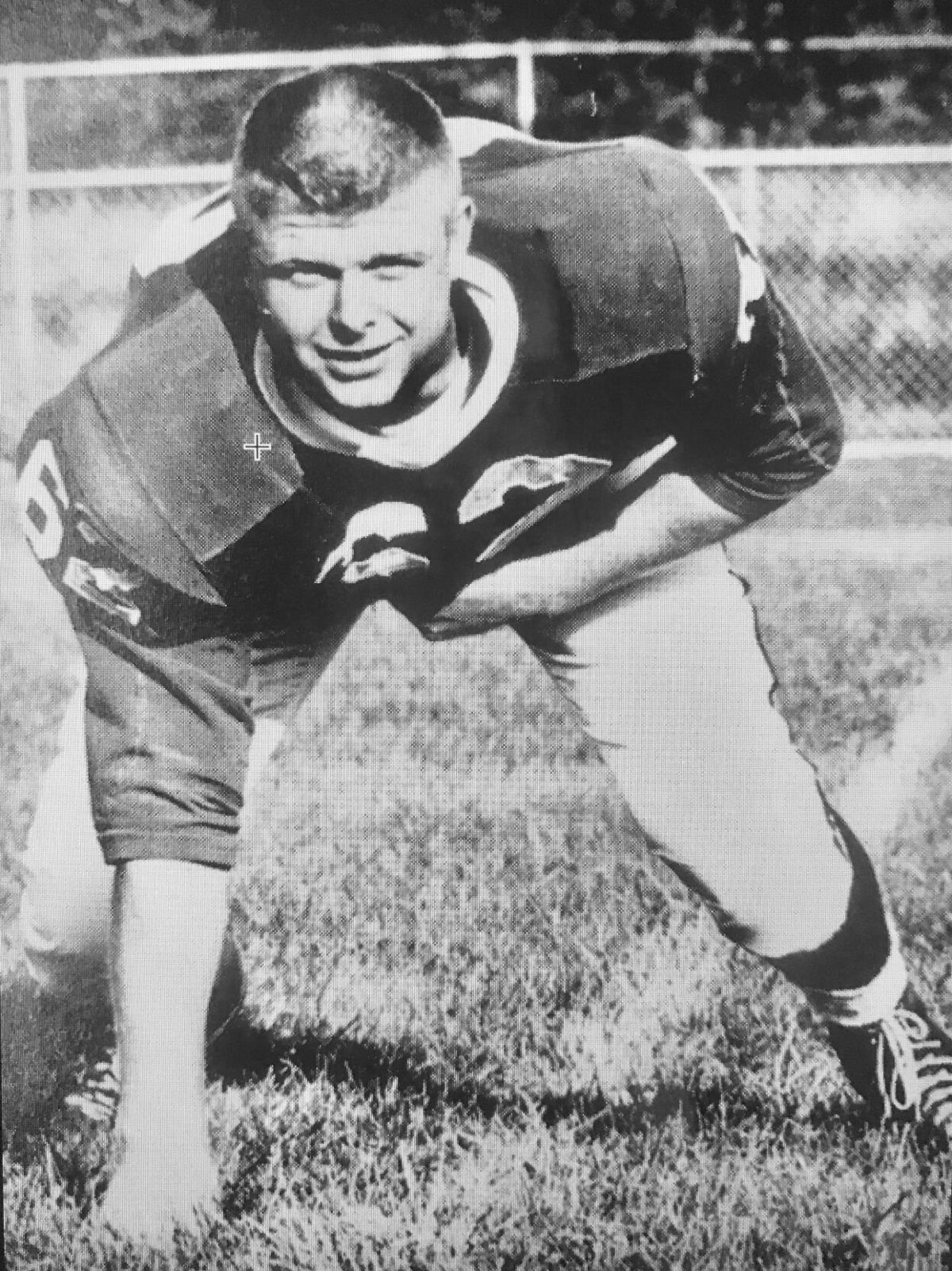 INDUCTEE – Football Player number 62 John Sklepkowski stands in a ready position for the upcoming game. He will be inducted into the Oscoda High School Athletic Hall of Fame on Friday, Sept. 24.

INDUCTEE – Football Player number 62 John Sklepkowski stands in a ready position for the upcoming game. He will be inducted into the Oscoda High School Athletic Hall of Fame on Friday, Sept. 24.

OSCODA – Members of the Oscoda Athletic Hall of Fame (HoF) Committee are hard at work for the induction on Friday, Sept. 24.

Due to the threat of COVID-19, there was no Athletic Hall of Fame Ceremony last year, which began in 2017. This year, the committee has decided to take the 2020 and 2021 inductees and group them together into one ceremony.

The event will be held before the Oscoda Owls versus East Jordan Red Devils football game. The day for the inductees will begin in the morning at 11:30 a.m., with lunch at the AuSable Inn Riverview Restaurant and Sports Bar, located at 600 S. State St., in Oscoda.

Shortly after that, there will be an OHS pep rally for the student body. There, all the inductees will be introduced. Community festivities will begin at 4:45 p.m., with a tailgating party outside near the athletic entrance of OHS.

A presentation of the hall of fame inductees will take place in the gymnasium at 5:30 p.m. Each inductee will receive a engraved plaque detailing their accomplishments at the presentation. At 6:30 p.m. there will be an inductee presentation at the 50 yard line with introductions given on the football field featuring inductees including, John Sklepkowski, the 1968-69 Men’s Basketball team, Ken Senter, Joel Mikazes, Mickey Kimsel, Mike Walker and the 1971 Boys Golf Team.

This year he is being inducted into the hall of fame for his individual accomplishments. His sports career began with basketball in 7th-9th grade. When he got to high school, he joined the junior varsity football team. By the end of his freshman year, he was moved to varsity for the final game of the season and played until his senior year.

Throughout his high school sports career, he collected many accomplishments. Specifically, in 1964, he was selected for the all American honorable mention by Coach & Athletic magazine and was the co-captain with Pete LaRouech of the undefeated 1964 team.

“I’m gonna speak from my heart because this honor is not just for me, its for our entire team,” said Sklepkowski. “Our team was a total unit. We were all in sync. We had one goal in mind and that was, ‘we were not going to be defeated.”

Being apart of the 1964 football team, he was also selected to all conference first team for the northern B conference and class B all state first team by United Press, Associated Press and Detroit News. At the end of Sklepkowski’s senior year he was selected for the NBC All-Conference Football team and received Co-Most Valuable Player from his teammates, along with LaRouech.

“This is a really wonderful honor for me and it can only happen because of all the team players that I played with,” said Sklepkowski. “The only other honor, in my life, that I think would equate to this was the fact that Pete LaRoeuch and I were selected by our players as Co-Most Valuable Players and I take that as probably one of the best and greatest memories of my life being selected by my teammates.”

He decided not to take any of them, but pursued engineering at MSU instead.

“About two years into the curriculum, I decided, ‘I don’t think I really want to be an engineer, so then I changed into education and I’m super happy that I did,” said Sklepkowski.

He graduated with a bachelor of arts in education with a major in math and minors in science and physical education and went on to teach math and science at Grand Ledge Public Schools from 1970-2000, specifically at Wacousta Elementary School and Holbrook Elementary Schools.

From 1970-75, he coached 5th grade basketball. In the late 1980s to 90s he served on both math and science committees to develope enhanced curricula to meet benchmarks required by the State of Michigan, received certification from the state to instruct reproductive health education to 5th graders and attended trainings sessions at Delta College.

He also, served as a judge for Olympics of the Mind for several years at Spring Arbor College. In 2000, he became a K-5 physical education instructor and he retired in 2005. He has been married to his wife Janis for 51 years, has a daughter named Jennifer and two grandchildren named Lily and Audrey. Sklepkowski and his family members will be in attendance at the induction.

The first team, for the 2021 ceremony to be inducted is the 1968-69 men’s basketball team, who were undefeated with a 13-0 record, until a game with Carrollton, where they lost by one point. The team was nominated for the hall of fame by Player Kevin Mahar.

“I looked at it from the perspective that, it was, it still is, it was the first really great team we had in the history of Oscoda basketball and it still is really great. A unique brand of talent,” said Mahar.

According to Firebaugh, prior to three point shooting, the Owls averaged 81 points per game, allowing opponents an average of 64 points per game, with four players averaging double figure scoring.

“The 68-69 Oscoda team was a team of good size and good seasoning,” stated Firebaugh in his addendum to the nomination.

He added that, being a junior, himself and the other non-starters really supported the starters to meet a common goal, which was to win.

“The rest of us just had to work hard and you earned your stripes, is the best way to describe it,” said Mahar. “We didn’t mind. We worked our tails off in practice, we had many tough practices, but in the end we were all teammates and we had one goal.”

Although they lost one game to Carrollton, they were still deemed northern B conference champions.

“It was a wonderful experience. It’s something that I never imagined. We had a really good team. By the time that we were in junior high school, we thought we could win the state championship and Coach [Ben] Summers, he put that idea in our head,” said Carl Sams.

According to Firebaugh, they were the first team in Oscoda’s history to win a regional championship, but in the quarterfinal they loss to Menominee, 77-72 in Traverse City.

The aforementioned championship was secured at Central Michigan University, when the Owls defeated Big Rapids, 86-64 and Rockford, 75-63.

“The Owls were considered heavy underdogs to Rockford, and its all starters; however, after a slow start, the Owls dominated the last three quarters,” stated Firebaugh in his addendum.

In late February 1969, The Owls also defeated a highly ranked Bay City All Saints Team at Oscoda, in a rematch with a score resulting in 106-87.

In March 1969, they went on to win a district championship on their home floor by defeating, Gladwin, Tawas and Ogemaw Heights, according to Firebaugh. They finished the season with a 19-3 record.

“It’s an honor to be inducted. I was kind of surprised. We got the induction invite and I just think back on those years and it was a formidable time in a person’s life,” said Cliff Draper in response to the invitation. “We obviously put in a lot of work in our sport to get there. It’s not like somebody just gave us a free ride.”

After graduation, many players went on to participate in college sports. According to Firebaugh, these are the players who played college ball.

“For me it was one of the most fun things of my whole life,” said Sams.