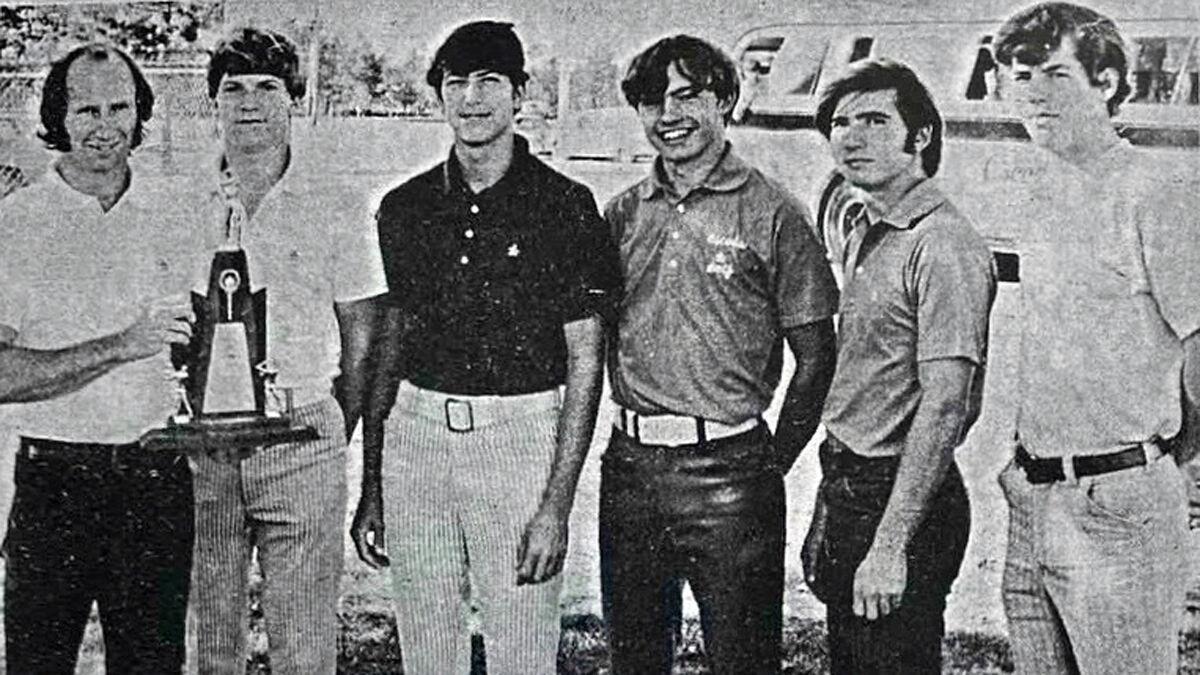 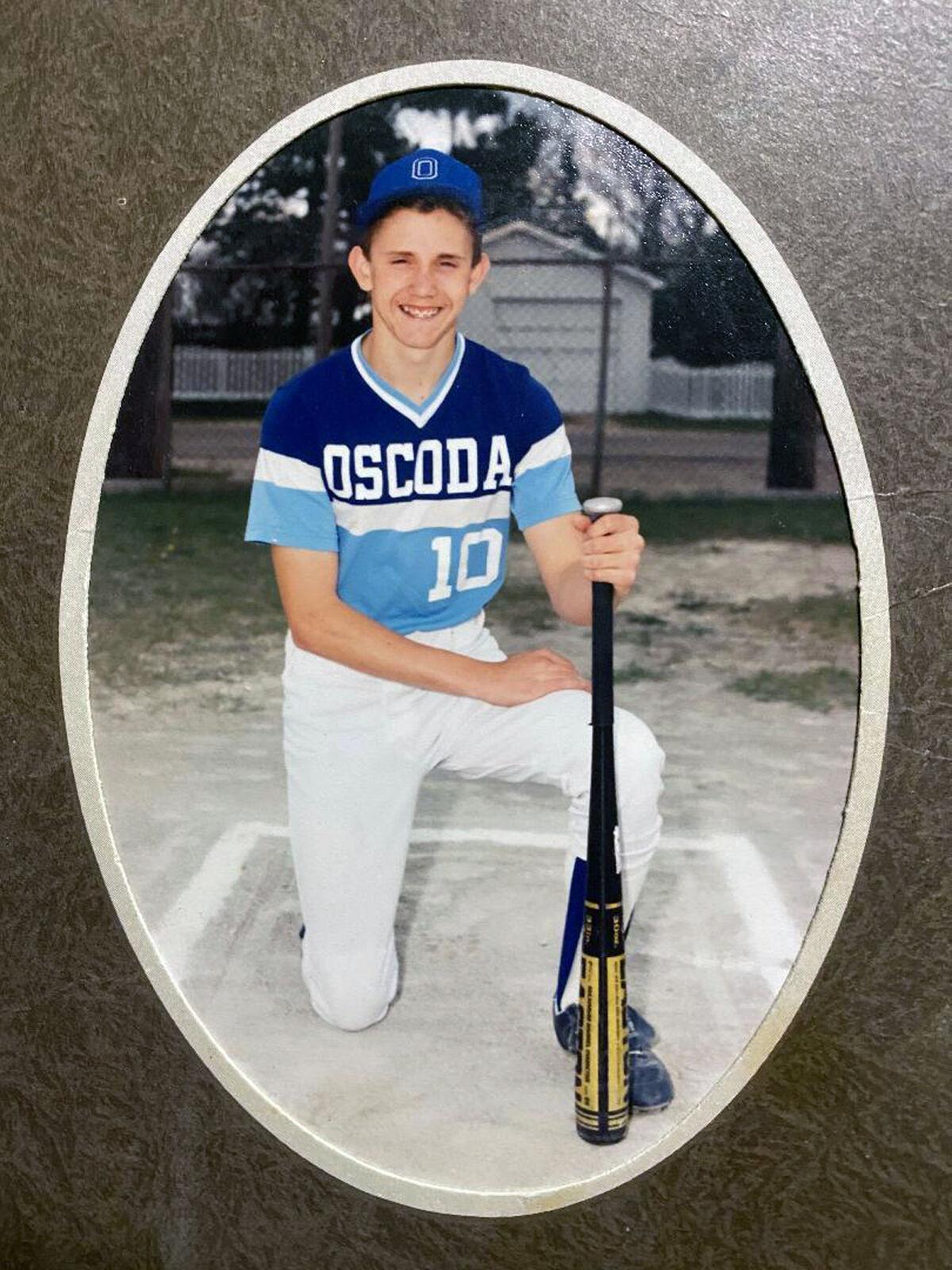 BASKETBALL – A 6’11 starter, Mike Walker steps on the court for a game with the Oscoda Owls.

BASKETBALL – A 6’11 starter, Mike Walker steps on the court for a game with the Oscoda Owls.

OSCODA – Final preparations are coming together for the 2021 Oscoda High School (OHS) Athletic Hall of Fame event this Friday at 4:45 p.m.

As previously reported, The OHS Athletic Hall of Fame committee will hold a tailgate at 4:45-5:30 p.m., with a hall of fame presentation in the high school gymnasium to follow. At 6:30 p.m. the inductees will be brought out onto the football field for a presentation. The Oscoda Owls versus East Jordan Red Devils will follow shortly after at 7 p.m.

One of the seven to be inducted into the hall of fame this Friday is Mike Walker who stood at 6’11 and played basketball from the time he was in 7th grade.

“He was just really was good with people and so that got him into sports,” said his brother Cary Walker.

He also played football his freshman year and tennis his senior year. According to his former coach and nominator Doug Ehle, Walker played basketball for six years, with three years on varsity.

In his time at OHS, he collected many accolades including most valuable player and coaches award in 1991, he was named to multiple all conference and all state teams. He also scored 1,120 in his career in high school, becoming the fourth leading scorer in school history and accumulated a single season rebound record of 262 rebounds, according to his other nominator Seth Alda.

In the North East Michigan Conference in high school, he secured two conference championships, two district championships and one regional championship. In 1990 the team’s record was 21-5 and in 1991 it was 19-6. He was also named honorable mention all American by Street and Smith, a national sports magazine, and according to Ehle he was selected to play in the B/C All Stars Indiana Top 20 All Star Game on July 27, 1990.

“As a junior and senior, Walker received a lot of attention from colleges and universities throughout the United States. He was one of the few juniors selected by Digger Phelps to attend Notre Dame’s junior recruiting weekend,” stated Ehle in his nomination. “As Mike’s coach, I handled all recruiting and was contacted by many universities and colleges.”

“Mike received recruitment from almost all division one major conferences and many division two and three universities,” stated Ehle.

In 1991, Walker graduated from OHS and went on to play basketball at University of Evansville in Indiana for two years. According to Cary, one of those years he got the opportunity to compete in the National Collegiate Athletic Association March Madness competition where he received a watch and a ring.

He later transferred to Central Michigan University (CMU) and became team captain. At CMU he pursued a degree in criminal justice and sociology and went on to be juvenile probation officer. He first moved to Alcona, but for the last 21 years he worked with Community Health and Family Court in Shiawassee County.

“His height and personality made that a perfect fit, just all the little kids looked up to him. They gave him some of the hardest cases because he could connect with them and bring about some change,” said Cary.

Cary said receiving the call from OHS Athletic Director Cheri Meier, with the news of his brother’s nomination was a surprise.

“I never even thought of it. I never put that together when she said that, it was just awesome. It’s a good way to remember Mike. It means a lot to the family,” said Cary.

Walker passed on Sept. 16, 2020. He was married to Wendy Walker and has two children, Sage and Stone. Members of his family will be attending the induction.

The final individual to be inducted into the OHS Athletic Hall of Fame this Friday is Mickey Kimsel who played baseball at OHS. He was He was nominated by David Beauchamp and started playing a number of different sports very young.

“My parents brought me up into sports. My dad played baseball and he coached me. We traveled around because he was in the military, so we lived in Okinawa, so that’s where we started playing sports,” said Kimsel. “I was about four years old, so when you’re starting that young you’re kind of natural at it.”

He said all through his years in school he played baseball as a left-handed pitcher. During his time at OHS he received a number of accolades including student of the week, a letter from the principal about being an outstanding student and most valuable player, just to name a few.

In 1992 he graduated from OHS and went on to play ball at Saginaw Valley State University. (SVSU). In his senior year at SVSU, he ranked among the top ten in three cardinal career pitching categories and he was the only pitcher that ranked among the top ten that has more career strikeouts than innings pitched. He ranked 2nd in saves, 3rd in appearances and 10th in strikeouts.

“In college I walked on, so I would come in relief. I would start a couple games, but the last two years I was the middle relief, my junior and senior year I was the closer,” said Kimsel.

According to his SVSU Head Coach Walt Head, Kimsel was an outstanding young man and had the best curve ball of any pitcher he has ever coached, including some big leaguers. In college he accumulated a number of other accolades including, second team all region senior year, four varsity letters, all American candidate at SVSU and he was apart of the championship team in the Great Lakes Intercollegiate Athletic Conference in 1995.

After graduating from SVSU with a degree in criminal justice, he went on to police school. Since graduating, he has served as a police officer for 23 years. After graduation Kimsel also went out to play baseball in Flint and later in Florida, where he’s played for the last several years on two different teams. Aside from baseball, he’s also competed in the AuSable Canoe Marathon twice.

“That was rough. The first time that was the hardest thing I ever did, so its fun training, but it was hard,” said Kimsel.

He also has continued to stay active by lifting weights, running races, doing triathlons and Taekwondo. As far as his reaction to the news, he said he was surprised.

“I was surprised and ecstatic about it,” said Kimsel.

The second and final team to be inducted into the Athletic Hall of Fame this Friday is the 1971 Men’s Oscoda Golf Team. Their story and the statistics were provided by former player Daryl Hollnagel and their nominator Michael Poland.

“We’re truly honored to have that happen to us. We’re basically on our 50th anniversary of when we won the state championship,” said Burt Poland.

According to Burt, this lifelong friendship began at the AuSable River Golf Course in seventh grade. Burt said himself, Hollnagel and Mike Quellman all worked there.

“Our parents would drop us off like on the weekends and it was nothing for us to walk and play 45 holes of golf,” said Burt.

“There were high expectations for this team but a lot of work was required in order to compete with the strong teams from the large cities in Southern Michigan. Practice began in the wintertime with the team hitting plastic golf balls off the stage in the high school auditorium,” said Hollnagel. “During Spring Break, the team, together with Coach Charles Furtaw and the OHS Band Director, Jack Brewster, took a week long golf trip to Southern Ohio to escape the Northern Michigan winter, practice and get ready for the upcoming season. After Spring Break, the team was able to play and practice at Greenbush Golf Course, the first of the area golf courses to open for the season.”

According to Hollnagel, the 1971 team was the first to play at Lakewood Shores. Lakewood had opened the previous Summer and its management, particularly the Head Pro, Tom Stewart, were strong supporters of high school golf. Lakewood allowed Coach Furtaw and the Owls to host the Oscoda High School Invitational that Spring.

The Owls won the regional championship qualifying for the state championship to be held at Black River in Port Huron. It was here that the Owls had their only disappointment of the Spring season, finishing sixth in the state among 32 teams. Rick Quellman graduated, going on to play college golf at CMU and a career as in the Professional Golfers’ Association (PGA).

“This time, Rich Mahar was the individual champion of the Invitational posting a 74 on the tough Lakewood course and tying for first with Dan Pohl,” said Hollnagel.

The five seniors on the ’71 Fall Owl Golf team also won the Northern B conference championship held at Bay County Golf Course in Bay City. The Owls won the Regional Championship played at Cadillac and qualified for the state championship to be held at Burroughs Farms in Brighton.

“Participating on this team was one of the most important things to ever happen to me. We were fortunate to have a great coach and mentor and the members of the team became lifelong friends,” said Hollnagel.

Fifty years ago on a rainy October day, the team won the 1971 Michigan Class B State Championship by a wide margin. According to Hollnagel. The team was led that day by Burt, who, despite the wind, rain and cold shot a 75 on the Burroughs Farms course, finishing third individually in the State.

“For us golfers that played in that state championship and the championship team its created a bond for us that lasted through the decades there and we still meet every year and get together,” said Burt.

To this day, the team has stayed friends and still gets together to see one another. Mahar is a PGA golf professional and owns a golf course in Ashland, Ky. He played a number of events on the PGA tour in the 80s. Hollnagel is a business lawyer in Charlotte, N.C. Summers is an executive for an international manufacturing company and lives in Batesville, Ind. Burt is a well-known Oscoda entrepreneur and has continued the team’s coaching tradition as his son, Michael, is now the coach of the highly successful, resurgent Owl varsity boys basketball team.